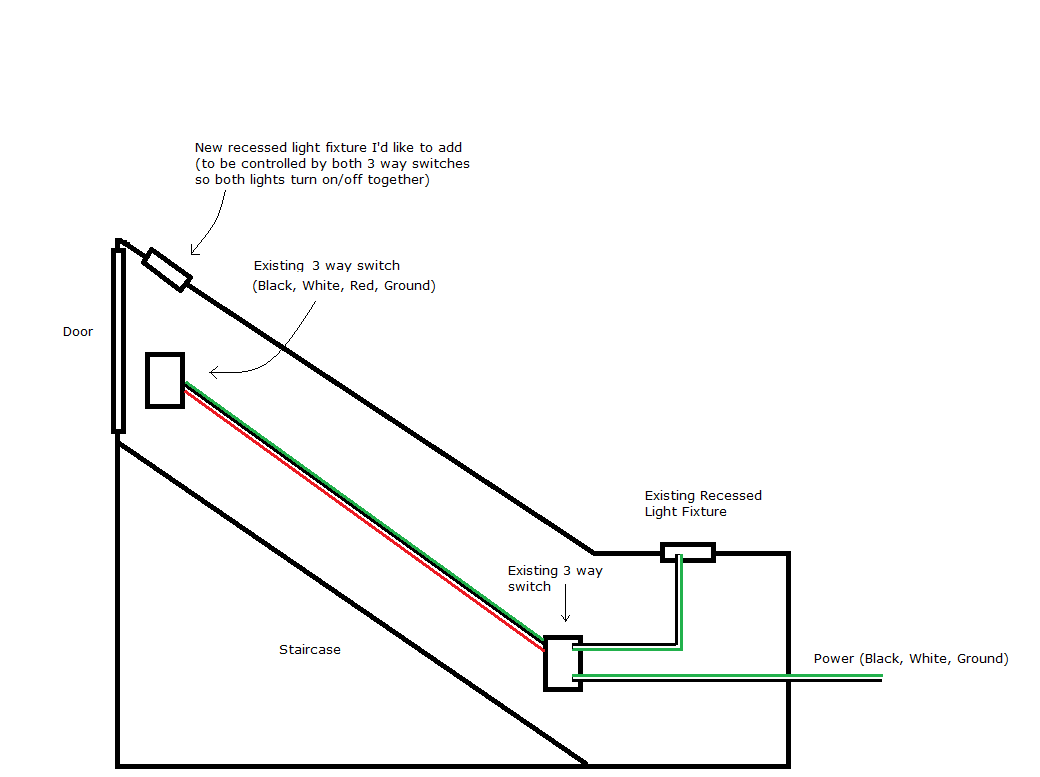 I attached a rudimentary diagram.

With the existing light on, you might have luck with a voltage detector (my stud finder does this) to locate within the wall where the wires run.

You may be able to attach the new fixture into the 3-way switch at the top of the stairs, but you will probably have to open the wall somewhere to run wires.

The obvious way isn't possible because you don't have a neutral at the top of the stairs.

There is a way, but it involves a bit of lateral thought and a change in how you switch the lights.

You rewire so that your black/white/red cable becomes live/switched live/neutral.

You then have two single-way switches in parallel across live and switched live. You can wire a light from switched live and neutral at the switch at the top of the stairs.

Now both lights will work when either switch is on. Problem - you won't be able to turn the light off from downstairs when you've turned it on upstairs. You need a switch which will reset itself automatically when the light is not needed:

which will operate whever motion is detected.

The two time-lag switches are wired in parallel with live/switched live/neutral at both switches, and the lights between switched live and neutral.

An added advantage of PIR detectors is it leaves your hands free if you are carrying things down stairs.

1
Why isn't this 3-way wiring working?
0
How to wire 2nd light to existing circuit with light and two 3-way switches?
1
How to add a light fixture to an existing 3-way circuit?
1
Adding a new switch with an independent light in an existing circuit
1
Rewiring light fixture and switch to bring neutral line to the switch: one 12/3 switch-leg vs two 12/2 wire to bring power to switch?
1
How should I wire / connect a new ceiling light to this ceiling junction box?
5
Wiring in a new light fixture and switch to existing switches?