How can I repair this gas leak on my new range? Teflon tape isn't working

I'm trying to install this GE gas range, so I attached everything and tightened all the nuts. Unfortunately, there's gas leaking at the base of the stove (where the flare connects to the stove).

I first tried without teflon tape at the base, and then I wrapped the flare with some teflon tape, but the leak is still there.

What else can I do? The flare fitting going to the gas range is 1/2". 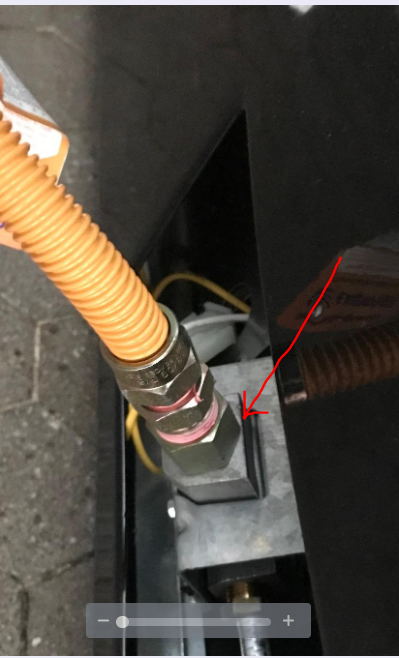 Stop, turn off the gas, ventilate the house, and hire a pro.

If you applied teflon tape to a flare fitting, you are NOT the person to be installing your gas range. You fundamentally don't understand what you are doing, and doing this wrong can blow up your house. That tends to impair the "learn from your mistakes" method of learning. This is not the place to be "figuring it out as you do it the first time."

Removing the teflon tape from the flares won't magically make you competent to safely complete the job correctly, so my advice is let a pro who knows what they are doing do it.

Repeating the comments : Do NOT use any pipe dope or tape on flare connections . They are metal to metal seals and anything on the metal sealing surface can cause a leak. Pipe threads (tapered) require dope/tape to get a good seal. I analysed a house fire once and the primary cause was a leak caused by dope on a flare fitting.

Everyone else is right. It’s supposed to be a metal-metal seal, so tape won’t do anything. Glue or caulking would not fix it, and trying to welding it or solder it won’t end nicely. Basically, Either the seal or a thread is damaged and you should get a professional to fix it. If not, your leak could not only destroy your home and possibly your neighbor’s homes, you could kill yourself and anyone living in your house.

As others have indicated, there is a very real danger that you have damaged the fitting in an attempt to fix it. Further attempts to fix it can cause things to get worse. And you can solve the immediate problem, but have it corrode or fail over time. Even if you live in an area where you don't have to have a license to work on the gas connection, there are a lot of indications that you really need someone who knows what they are doing to fix this problem. (I live in farm country where everything, including gas line installations is often DIY. I've also seen some really, really bad DIY work. I also have known "professionals" that were so bad they were dangerous.)

Either your propane supplier, or the gas supplier, if natural, should be able to point you in the right direction for a competent installer/repairman. If your candid, they will often steer you away from the jerks as well.

Not sure where exactly your are describing your leak is. And I am not familiar with the exact type of flare fitting used in your photo, but down here we typically use gas-rated gaskets to seal the fittings. It is not clear from your question whether this fitting supports it and if it does, whether you have the gasket, but usually it is all that's needed:

The black ring inside is obviously the gasket. If you tighten the fitting enough, there are no leaks.

I'm still alive and nothing's blown up... yet.

After watching this tutorial and calling the shop that sold me the parts, I found out that the reason for the leak was that the flare-end of one fitting was attached to the stove.

So I took apart everything, cleaned everything well, and then attached both "flare-end" fittings directly to both ends of the hose for a metal-to-metal seal. Then I put some teflon tape over the threads that don't have flares. Once everything's tight, I opened the gas valve and double-checked with soap water. No leaks anywhere.

I was surprised that nowhere in the internet does it clearly mention that the flare-ends are attached directly to the hose. I found out about this from the video above and taking screenshots of both fittings (#1 & #2). The video's far from great, but it quickly cleared that up. Then I confirmed the information with the shop.

And finally, for anyone that wants to try this, when all is said and done, you're basically attaching a hose to two ends. I'm far from a DIYer, and I was able to do it. As long as the connections are tight and there are no leaks, then it's definitely doable.

I'll take pictures of the final installation for reference.

Not the answer you're looking for? Browse other questions tagged appliances gas range propane or ask your own question.

2
Why am I not getting enough gas pressure for a BBQ and generator?
4
Advice for swapping out my gas dryer myself
3
How can I be sure there are no gas leaks around Gas Oven/Range Combo?
1
Measuring Incoming Gas Pressure to Stove
0
Teflon Tape or Sealant on Any Flare Fittings for Gas Connections?
3
Brand new stove burners won't light
0
Gas line to appliance seized cannot disconnect
0
Dryer smells like gas after hiatus and reinstall
0
connecting a grill to gas line
0
Replace corroded gas range line