I have a downspout that runs directly into the ground. 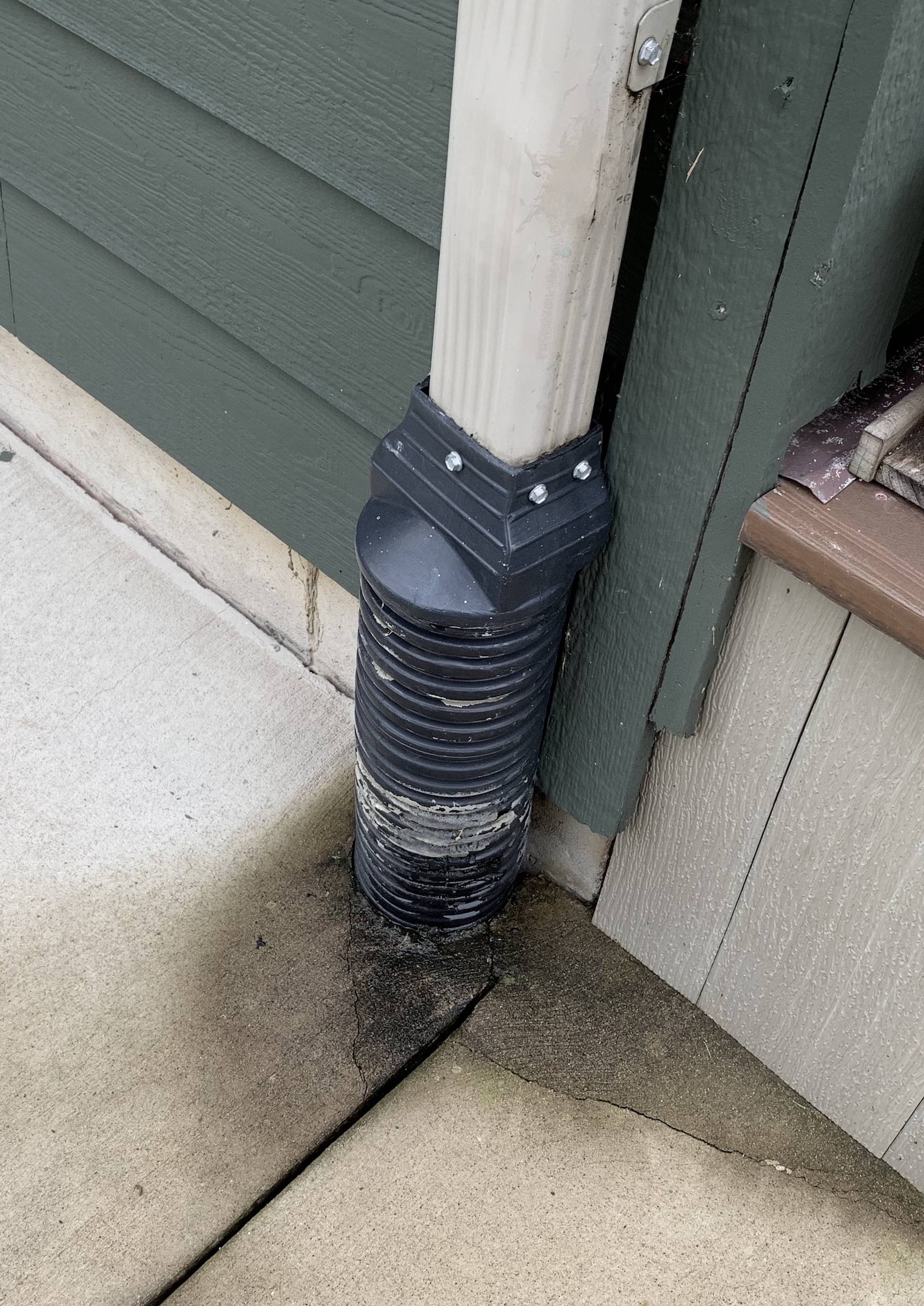 My first question is where would a downspout that enters the ground like this lead to/empty out to?

My next problem is that this spout is partially clogged up in the pipe that's under ground level. When there is a heavy downpour, water will shoot out at the connection between the metal downspout and the black, plastic pipe. I've confirmed the clog is in the pipe as I've taken apart the connection and tested both the pipe and the metal downspout with a hose. Water runs through the downspout just fine. But when I put the hose directly into the pipe, water starts to backup. With that said, my second question is does anyone have recommendations for how I could clear the clog in this pipe that's underground?

Lastly, during the last downpour I noticed water bubbling up from the ground from a green, circular plastic cap that's in the yard on a straight line out from downspout. Looking at it further, the cap reads "NDS" and can be pulled up slightly, where I can look inside and see a large amount of "gunk." This seems to be related to the downspout and/or clog but I'm not certain.

Thanks for the help! 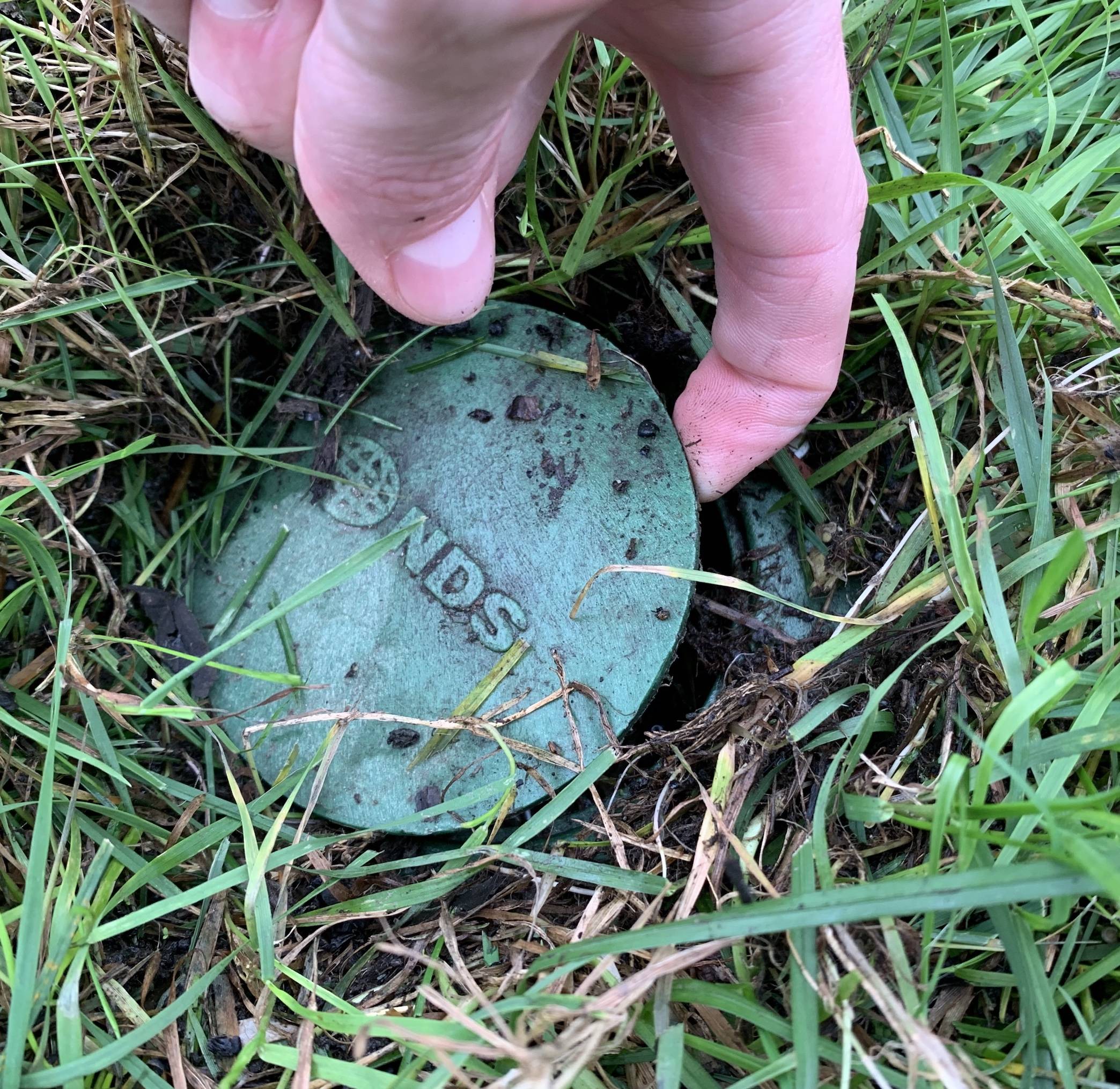 The new house I bought has some of these, so I've done some checking on how they work and how to keep them in repair. The most important things are to keep the vertical part that attaches to the downspout sealed, and clean out the emitter side as necessary or keep the gutter and downspout from getting leaves and seeds that will clog the downspout or tubes.

Mine are made from 4" PVC pipe rather than corrugated drainpipe like yours, so the smooth inside helps push clogs to the emitter end because of the water flow. For water to flow, you need the downspout end higher than the emitter end (which looks like it's the case here). Because of the flow and force, most of the clogs in mine end up right under the emitter, so I can remove the cap and pull a handful of leaves out and replace the cap.

Pardon the rough drawing, but this shows how the (potential) water level (orange line) forces water to the other end; the water level wants to even out on both ends so even if your emitter is low in the yard, water should still flow as well as it can. You may have a clog in the line if it hasn't been maintained for a while, but drainage has probably pushed all the clogging leaves to your emitter end so you can clean that out easily. I rarely have to take mine apart (but I keep the PVC unglued so I can check elbows if I need to).

I've had this happen during heavy rain on all my downspouts that feed into underground pipes that emit in the yard several feet from the house. In my case, the pipes were not clogged and where some of the pipes comes out of the ground is actually 6 feet higher than the exit points.

I personally installed all the pipes and remove emitters on my house. Some use 4" corrugated pipe and some use straight 4" PVC drainage pipe. All do the same thing. Two of the pipes open straight to a drainage ditch with no cover on the end of the pipe.

Even when newly installed with nothing clogging the pipes, this still occurred. My only conclusion is there is just too much water flow and too much restriction in the pipe to handle the immense amount of rain water coming off the roof. This is a big house. 10,000 sq ft of shingles on the roof.

The only reason I noticed it was an issue is because during heavy storms water would run down the wall in my basement. I watched the video from the deck camera and saw the water, not only shooting up 3' from where the downspout entered the pipe, but from the seam 5' feet up. Water was then getting on a piece of foundation used to hold the decking. It was then trickling under the bottom plate and into the basement.

What I also found is that my grass loves to grow roots into the pipes where they exit in the yard. I've pulled 4' long lengths of root out of the pipes. Watch out for snakes and other creatures. I encountered a baby brown snake in one drain today.

Clean out the exit point in the yard. Then, install these on all of your downspouts to prevent future clogs.

4
How much drainage pipe should I bury for a new downspout?
1
Can I use aluminum or plastic sheeting between decking and joists to waterproof under a deck?
5
Why is my shower not draining, even though there is no physical blockage?
2
Deteriorated downspout replacement
0
How to diagnose a greywater system backup
1
Sewer backup through basement floor drain after heavy rain
1
Clogged downspout pipe