Is there any way to either 'break in' or live with tamper resistant outlets?

I've read of many people have trouble with TR outlets, mostly plugging into them.

What mechanisms are there for either breaking them in, or otherwise living with them when you don't have Little People underfoot?

A: Several sources claim they loosen up with time. Other sources have claimed that outlets have broken before accepting a plug. The latter seems to be more common with off-brands.

So: If you are doing your own work: Plug something in a dozen times BEFORE installing the outlet. This way, if you have a defective one, you can find it/break it before going to the bother of wiring it in. You don't even have to use a cord. Have a spare plug kicking around?

If you are doing a bunch of these, it may be worth using a drill press or bearing press to push the plug in. The ideal plug is one that has a neck on it smaller than your chuck size. 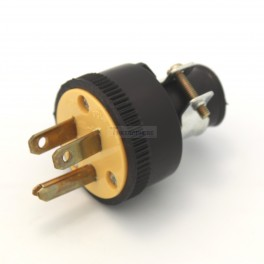 A small wooden box with a flange that could be clamped to the drill press table, with bars across (bolts? Large nails) positioned so that the plug could pass between, but when you raised the drill the box would keep the outlet from following. Slide the outlet in from the side. Probably could set up a cottage industry doing this for electrical contractors.

B: When I was a kid, we still used slide rules. I found that the best lubricant for a sticking slide rule was baby powder. Any powder that is basically scented talcum powder should work. I have since used talcum powder anytime I need two pieces of plastic to slide past each other. Apply with a small watercolour paint brush, or a blower.

This is a lot easier to do and to clean up if done as prevention before. Lay the outlet on it's back, dust it with talcum powder, insert the plug a few times. Gravity carries the powder into works. Shake a bit, tap in various orientations, brush off the excess.

C: Sources have claimed TR outlets are 'elder proof' Much like child proof caps on drugs are more resistant to older fingers than younger ones, I've found lots of complaints about the difficulty for older people using TR outlets.

This may be an answer: 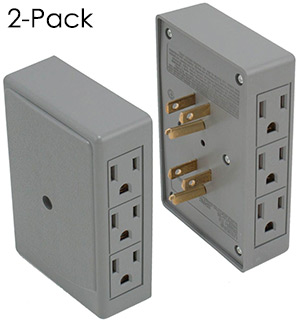 These come in various formats. Outlets on front, sides, ends... Some even have USB charging ports.

This means you only have to struggle ONCE with the outlet. If nothing else, the ergonomics would seem to encourage putting the device in perpendicular and simultaneously into both outlets at once.

7
Are there locations in a residence where a non tamper resistant receptacle can still be used?
4
How to trace mystery switches
0
Why do I detect voltage on my ground of surge protector?
5
Why is high voltage coming out of HDMI port on my TV?
0
Outlets worked intermittently with voltage fluctuations and are now dead entirely
7
I'm replacing my outlets and I have too many hot/neutral wires, what do I do?
9
Breaker Mapping Questions
1
Overloaded circuit on ungrounded outlets
3
Can I add an outlet to the garbage disposal switched circuit?
0
Outlets/Lights out - Breaker on