Can I just add air to an air-over-water pressure tank?

We have an older well system in a house that we purchased this summer. The information that I have found on the web assumes that there are some valves in the system that I don't have, for instance allowing me to drain the tank or bypass the water softener. 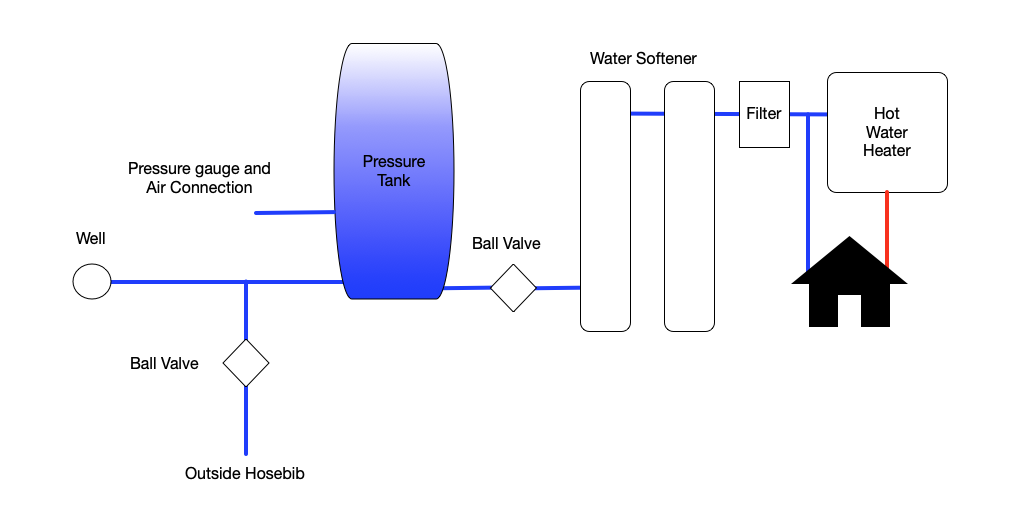 There are a couple of other valves I left out, but they are not helpful, they just allow you to shut things off before or after a component so I left them off the diagram.

The pressure switch is set at 40/80 psi and the pressure tank is probably 75% full of water based on the line of condensation on the outside of the tank.

The directions I have found talk about draining the system, then pressurizing it to 25psi, then turning on the pump and flushing the system at a point before the water softener. I cannot do that since I don't have any points to drain from and I cannot get any water out to the system before it hits the house or an outside irrigation hose bib.

My plan is to turn off the pump, attach air compressor and open a faucet, so that I can basically replace water in the tank with air and stop when the tank is 30% full at 40psi. Then I would turn the pump back on and hopefully be good to go.

This is the way it feel like the system is intended to work, is that the case? Or is there a better technique that I should be using?

Edit #1: In response to the comments I don't think that I have an X-Y problem here, clearly I have a waterlogged pressure tank and I am trying to fix that in order to reduce the rate my well pump is cycling at. I know the what, I am uncertain of the how in the case of my older system.

@jsotola I don't want to sound pedantic, but I'll explain it for anyone else who might have similar questions. The purpose of the pressure tank is to smooth out the operation of the well pump, so pump will compress the air in the tank up to 80 psi and then when you open the tap the air pressure is what actually pushed the water out or the pipe. Then when the pressure drops to 40psi the pump will turn back on to repressurize the tank back up to 80 psi. If we have 1 gallon of air at 40 psi, then at 80 psi that same air will only take up .57 gallons, so in the case of my 40 gallon tank having 25% air at 40psi means that the tank will only store 5-6 gallons of water. If I start at 70% air then the tank would store 16 gallons of water and the pump would cycle significantly less.

The reason I was suggesting 70% was that I did not know if the pressure switch had to stay submerged.

Edit #2: Here is a picture of the tank in question. It is one of the old ones with no membrane. 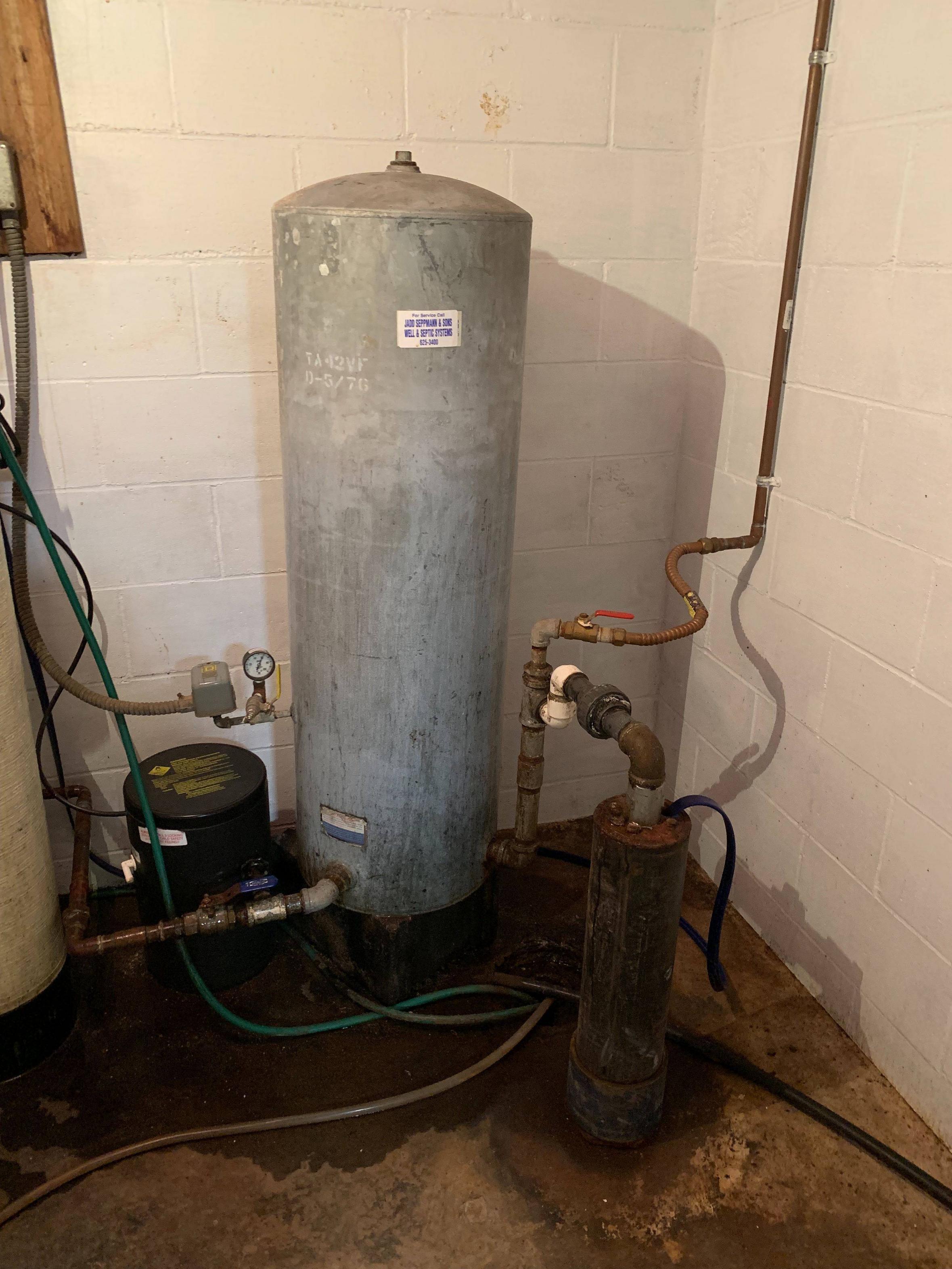 Edit #3: I’ll start with the embarrassing news, when I got into this process I realized that there was a hose bib mounted right next to the ball valve. It was covered in black goo and blended in with the permanganate container, but this made flushing the tank more practical.

Before that I had been filling the tank via the Schrader valve and it was making progress. But then I noticed the valve I had missed before. So I, just drained the whole tank at that point.

I pressurized it to 37psi then turned the pump back on, everything filled up nicely. I then opened up the valve and flushed the system for a while.

This is a graph of the pump activity before and after the process: 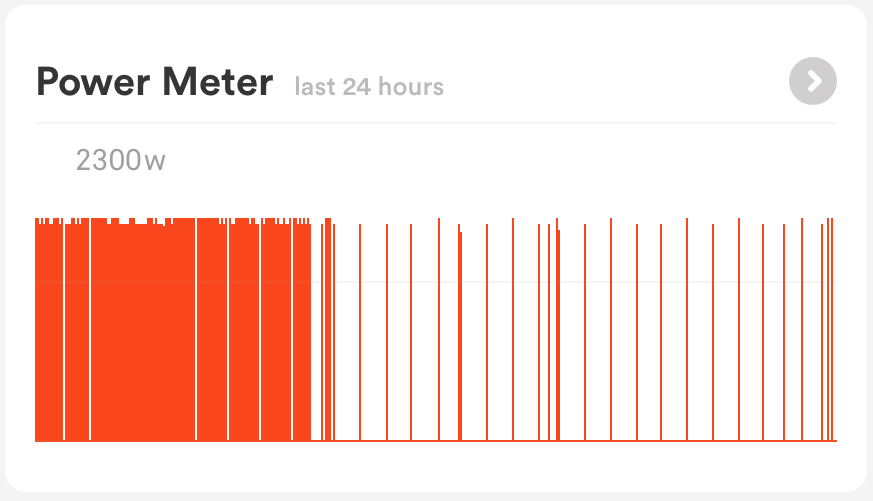 The pump is cycling much more infrequently. I guesstimate that I am losing about 20 gallons of water an hour, so that is my next issue to resolve.

If you have a fitting you can connect a compressor to, you don't even need to turn the pump off - pressure from the compressor should keep the pump from turning on.

I'd strongly suggest, when funds and time permit, some replumbing to put in valves you lack and considering a bladder-type tank, but for cheap and quick, if somewhat of a hassle, just draw down water until you get near 40 (but not so near as to turn the pump on) and pump up to 80 with the compressor, repeat as needed or until you have the water level you want for now. You will be repeating, given a non-bladder tank and evidently no or malfunctioning (common) venturi (aka micronizer?) valve to automatically add air. So if you don't plan on changing the tank, plan on making it easy to connect the compressor. I'd use a quick-connect coupling. Do make sure the compressor you use for this is "oil-free" - your drinking water supply could get nasty with an oiled compressor adding air (and just a bit of compressor oil) to it.

The pressure switch does not need to be submerged, by the way. It senses pressure, and does not care (or know) if it's sensing air pressure or water pressure. The "standard drill" for bladder tanks is 3 psi below the cut-in pressure when empty, i.e. 37 PSI in your case (however, it's not a bladder tank). But given no place to flush from (other than shut all water uses off, pump to shutoff, then flush from outside hose connection, which will help with the tank debris, but not anything in the pipes to the softener) and no basic filter ahead of the softener, adding air without fully draining is probably safer, since it will stir up less debris.

With your pressure switch being 40/80 the normal pressure for a tank would be 36-38 psi. Normally just a few pi’s below cut on. This information is widely available on the web. I don’t think your tank is waterlogged or the condensation would be to the top. The pressure gauge doesn’t have to stay submerged it is a Borden movement the tiny tube is able to use air or water with no difference in performance. Old diaphragm tanks are not as effective as new bladder style tanks and this is why a bladder tank can be 1/3 the size as they use almost all the water where diaphragm tanks only about 1/3. You can use your compressor or even a bicycle pump and add air to the tank. Even a tank with a damaged diaphragm can be recharged and as long as the water level in the tank traps the air inside (not drained) the tank will function. I would suggest getting a bladder based tank for several reasons. First they are better than a diaphragm for extending the draw down this less pump starts. Second, bladders draw from the bottom your tank has a layer of silt or mud in the bottom you may notice this whit heavy usage your water may get brown this is that silt being disturbed. And we already know that bladder tanks are smaller but that is not an issue since your system is already laid out. I am not sure of the age of your tank but have not seen one for quite a while most of this style rusted out many years psi in my area I think the last one I did was 15+ years back, so yours may be close to failing. Although I don’t believe your tank is waterlogged a small amount of additional air may give you the drawdown you are looking for. If your tank is waterlogged (diaphragm damaged this can allow the air to be in contact with the water and create a bad taste this is the reason I suggest a bladder based tank but have had customers add air to their tank to make it by until they could afford a new tank several months later.

Not the answer you're looking for? Browse other questions tagged water-pressure well well-pump or ask your own question.