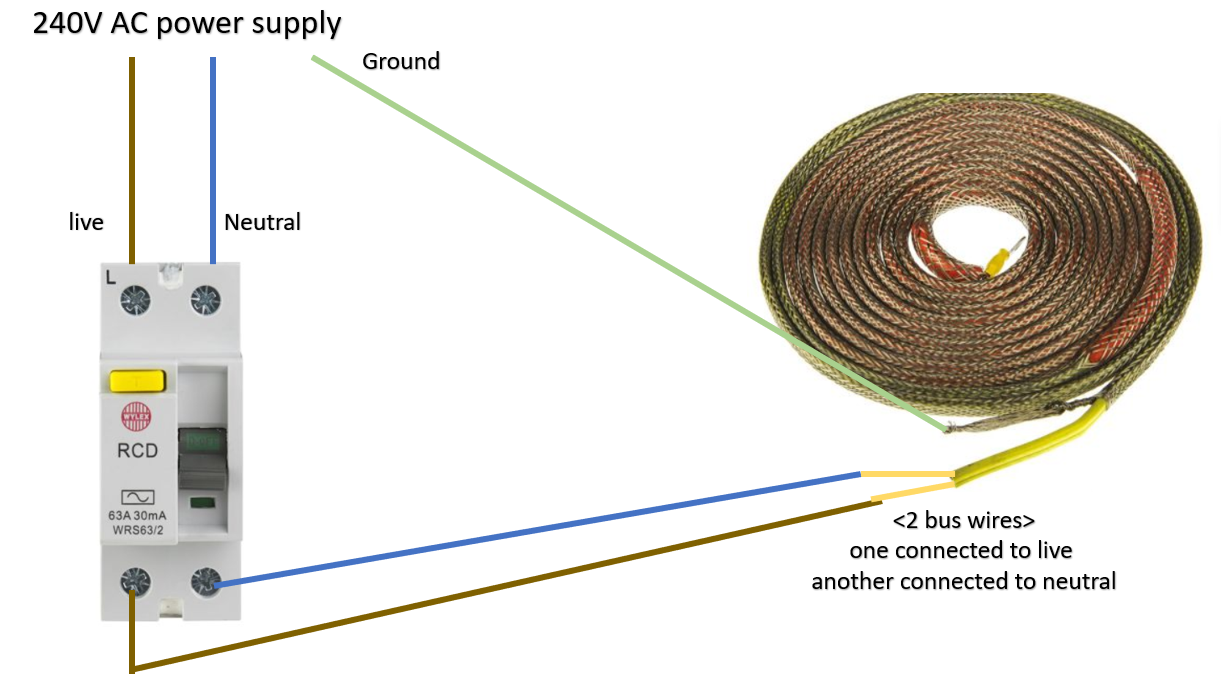 I want to use the heating tape (constant wattage) and I was told that I should use RCD for the safety. I am new to RCD so I wanted to double-check if this is a correct way to wire the RCD with the power supply and the heating cable. Your help will be greatly appreciated. Thank you.

Note: You haven't mentioned your jurisdiction, but it is quite likely that you might need qualified/authorized electrician to perform electrical installation changes according to the Code.

That being said, yes, in your picture you connected RCD correctly.

RCD (also called GFCI or FID elsewhere in the world) is residual current device, which means it will measure the difference in current coming in from Live side and going out to Neutral side. If that current is bigger than its sensitivity (30mA in your case), it will break the connection. Single phase RCDs (as your in the picture) do not have ground connection (just 4 connections: Live in, Live out, Neutral in, Neutral out). See failure modes below on why.

Also note that "63A" marking on RCD is not any measure of its protection, it is simply maximum current rating that is capable of operating on. If you go over that, you will destroy your RCD (which you do not want).

Please note that you also need appropriately sized overcurrent circuit breaker (MCB) in addition to RCD (or get combined RCD/MCB in one package, sometimes called RCBO). For example, if your heating cable is 1000W, you would install 6A MCB (as that is first MCB size above 1000/240). If it is 2000W you would get 10A etc. In your picture, you would preferably connect it on L input before RCD.

You also need to monthly check your RCD by pressing "Test" button (yellow in your example) and verify that is tripping the RCD.

For those interested in details, let's see failure modes of your heating cable:

No no no, you can't directly feed a branch circuit load off the pictured 63A breaker!

A breaker that size would be appropriate to feed a subpanel (e.g small secondary consumer unit), and inside that, you could have regular breakers of appropriate size (13A or 16A) to feed to the heating tape. Every circuit thus fed would inherit the RCD protection from the pictured breaker.

It is normal in Europe to put the RCD on "the whole house" or a significant fraction of it. So 63A is a perfectly normal size for a 30ma rated RCD. The purpose of the RCD is reduce house fires by catching partial-short ground faults, and also providing limited protection to humans against severe shocks. This contrasts with American practice to put one 15-20A RCD (GFCI) per branch circuit, and the RCD is much more sensitive at 5 to 8 milliamps. The primary purpose of that RCD is to protect humans from shocks of modest severity. (A shock that stuns, also kills if it has knock-on effects of falling, drowning etc.)

So if you are powering a modest amount of heat tape (<2500 watts) and your primary purpose in RCD is due to an elevated risk of electrical shock, you may want to opt for a branch-circuit-sized 6ma RCD.

Not the answer you're looking for? Browse other questions tagged ground wiring wire or ask your own question.

1
Jumped light switch wiring
1
Old AC and Gas Boiler wiring for new thermostat
1
Narrow conduit (old building), need to run 2xhots, 1xneutral
0
Need Help Wiring Replacement Ceiling Fan
1
Options for current armored cable 12/2 but need 12/3
3
TWO ORIGINAL SWITCHES - ONE three-way and one single cant figure out wiring for SAFE UPGRADE
2
Can I use an insulated ground wire in a sub-panel?
2
How to add an extra light to an existing light
1
What type of wire nuts are recommended for #6 and #8 wires for oven installation?