What is an NEC code-compliant way to install a 15A 120V dimmer switch --> driver --> led strip set up that enables the driver to be concealed or out of view but accessible for an in-wall lighting effect similar to below: 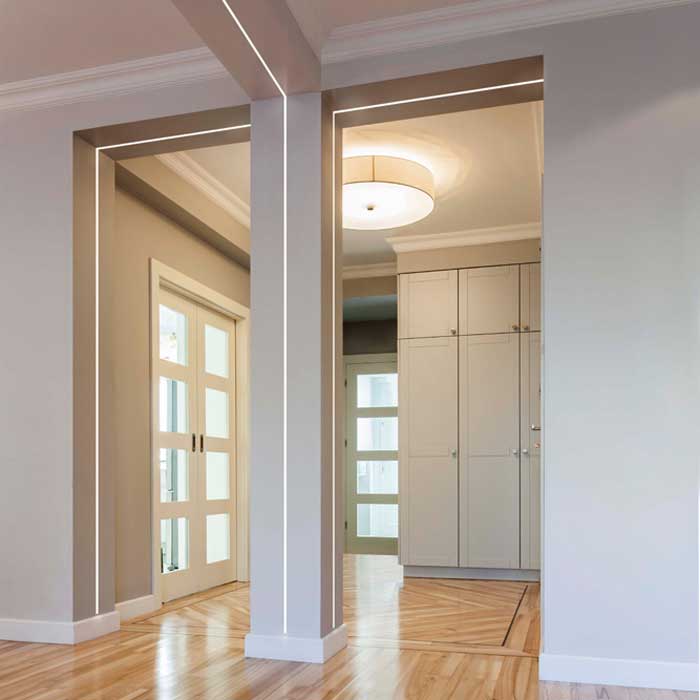 The switch is to be close to the wall in which the LED strip and channel is embedded. Can the driver be located elsewhere in a cool/clean environment or inside some kind of junction box with the low-voltage connection run back to the LED strip? Since you cannot enclose electrical devices inside a wall cavity, how does a professional electrician conceal the driver while still being able to control the light via switch?

In the 120VAC world, the scheme for dimming is an extremely hanky-janky hack, which was only made to work with incandescents. LEDs are immune to it. Dimmable LEDs need a microcomputer onboard to "outsmart" the janky dimmer scheme, reverse-engineer what the dimmer is trying to do, and then set dimming to that level. It's a true Rube Goldberg contraption already. Now try to add AC dimming a low voltage driver, and you have a totally unworkable train wreck.

In the 12 VDC world, LED dimming is blissfully easy. You make constant 12V, then you take that to an electronic "PWM" dimmer. This is an elegant method that plays to LED's strengths. It scales infinitely (you could dim a whole stadium using this method), you can carry dimming long distances as a signal, and then power each bank of lights locally, responding to the dimming command. You can have any dim level possible, limited only by the resolution of the dimmer. You can even "dim" RGBW, meaning select any color you want.

So yeah. Do your dimming on the 12V side. Also, it's low-voltage, so the easy low-voltage wiring rules apply.

So yeah. Stick the 120v-12V driver in the basement, and bring 12V up to the switch and/or lights. You could even put a battery there and replace the driver with a charger, along with a solar panel and charge controller. Then the lights would work during outages!

There are two ways to go about it.

Pretty straightforward: bring 12V to the switch, dim it, then send 12V (dimmed) to the lamps proper.

Separately, you send to a basement amplifier:

This can be repeated for as many [power supply]/amplifier/LED sets that you wish to drive.

If you want to do this with RGB, then the dimmer will output three "-" wires (and one + if you're talking to a different power supply or driving LEDs directly). The LEDs will take 4 wires: R G B and common.