Is wiring the neutral in a circular path correct?

I have a bathroom that was re-wired to add a bathroom fan some years ago. I am wondering if it was wired correctly. Originally, I believe the overhead light was wired in a switch loop to a single wall switch. When the fan was added, two new switches (for the fan, and the fan's light) were added on the wall.

To make this work, the electrician pulled a new wire pair from the switch to the overhead light. The old wire pair is now in parallel with the single circuit from the breaker panel, it provides power to the three wall switches. All of the neutral wires at the light are tied together, and all of the neutral wires in the wall are tied together. Because there are now two wire pairs between the overhead light gang box and the wall switch gang box, this creates a circular neutral path.

In the image, the neutrals are tied together at A and B, and the circle / parallel path for neutral is created by cables 1 and 2. Grounding wires are not shown. 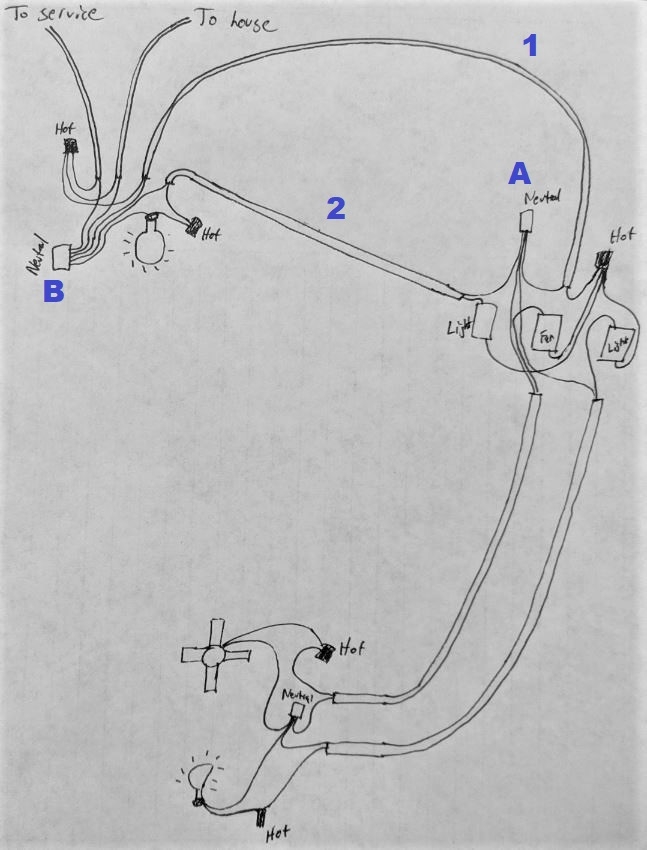 I think you've figured it out, but here it is in diagram form anyway, for future readers who may be more visually oriented: 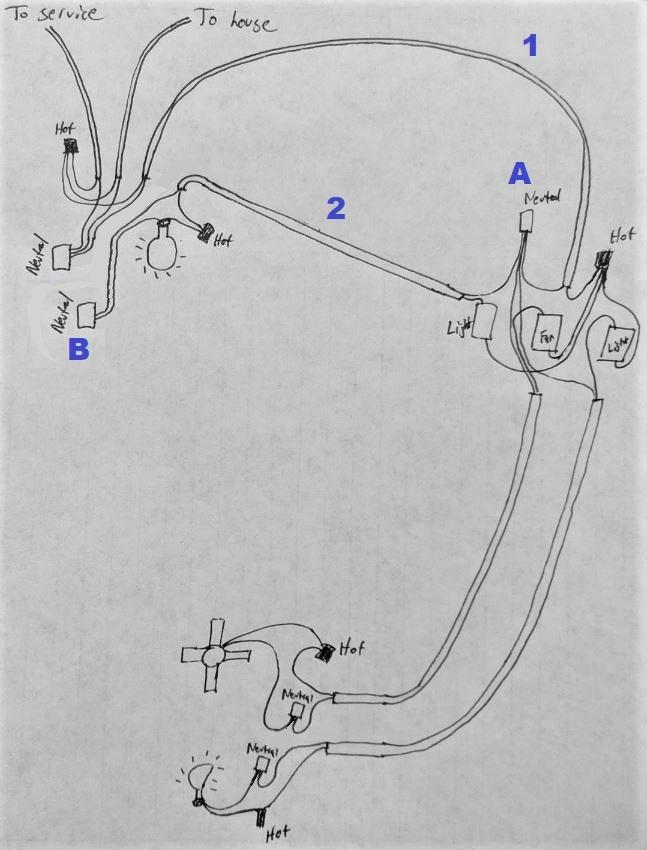 As you have indicated, you will separate the neutrals at two locations.

This is not allowed. If I understand your description correctly, the neutrals are in parallel. So for example if only the fan is powered there will be current only in the hot conductor for the fan, but the current in the neutral side will be divided between two separate cables.

Parallel current paths for the neutral are not allowed because in any cable the current in the hot conductor(s) and the neutral conductor are supposed to be exactly the same (but they will be in opposite directions) so the magnetic fields cancel out.

EDIT Light and fan combinations are normally wired with a single cable which has a common neutral but separate conductors for each hot. The total of the currents in the two (or three) hots will equal the current in the common neutral.

This has come up numerous times on this site and there are code experts here who could give the reference.

This may be the reference (https://www.ecmag.com/section/codes-standards/web-code-requirements):

The basic requirement is found in 300.3(B): “(B) Conductors of the Same Circuit. All conductors of the same circuit and, where used, the grounded conductor and all equipment-grounding conductors and bonding conductors shall be contained within the same raceway, auxiliary gutter, cable tray, cablebus assembly, trench, cable, or cord, unless otherwise permitted in accordance with 300.3(B)(1) through (B)(4).”

Since we have these very nice drawings, here's a great way of telling if you've complied with 300.3(B).

Open the drawing in a Paint program, Photoshop is overpowered but it will do. Select the "paint can" (autofill) tool. Click in an open area. If your drawing is 300.3(B) compliant, the paint will fill the entire diagram, except inside boxes and between wires in cables.

Note that on A.I.Breveleri's diagram it will do just that.

This mistake arose because the last guy didn't understand: Neutral is not ground. The guy saw all the grounds glommed together just like that (which is fine), and sees neutrals clustered onto a bar just like grounds (often the same bar), and figured "Neutral is [like] ground". And you can get away with that safety defect because nothing tells you not to. At least until you install a GFCI device.

1
Wiring Bathroom Fan Switch
1
Why isn't this 3-way wiring working?
3
How should I wire a ceiling fan when there's only three wires in the box?
1
Is this ceiling box wiring correct and how can I reconnect an abandoned 3-way switch to it?
1
"Neutral wire required"!
1
Ground Wires in a Multi Ganged Switch Box
0
4 light switches powered by 1 hot wire
0
Converting to a double switch but lost power to rest of circuit
9
Why are there three sets of wires for two switches, and how to wire up the neutral?
0
2 gang switch in bathroom, replacing exact switch with timer -- question on neutral