Can this outlet be used with an adapter for generator power?

Greetings to anyone who can help: can this (halloween-type face outlet) be used to plug my generator into the house for backfeed power? I'm guessing I'll need an adapter, if such a thing exists? I'm trying to avoid buying a 100' cord...this one is perfectly placed on the back patio wall under cover. Thanks for any help 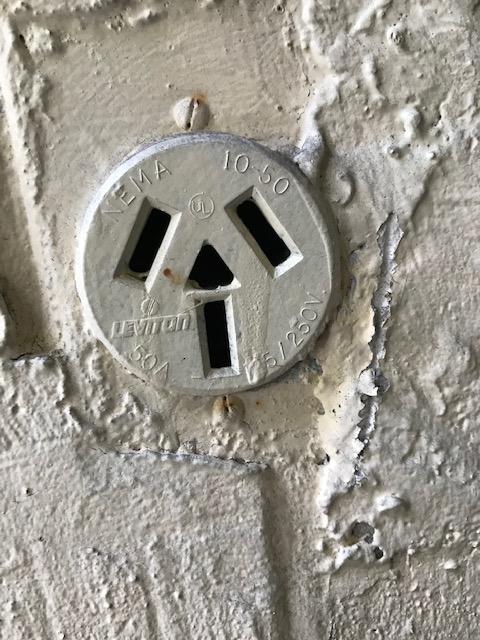 There are two "five-alarm fire you're gonna kill somebody what are you thinking" issues here, and one footnote.

There must. Must. Must be an interlock switch which makes it mechanically impossible for your mains supply to be on at the same time as the backfeed breaker.

You may know to shut off the main (grid feed) breaker before turning on the generator. More is required. The generator must backfeed into a breaker, and that breaker must be physically interlocked with the main breaker so they cannot be on at once. Depending on your panel, kits to do this are as low as $30.

If you are very cheap, that may be an absurd amount to pay merely to protect some random lineman who has worked 24 hours straight in the wet, cold, windy sleet to get your power back on. You might say "well, he should take the time and trouble to rig ground-outs on all the lines he's working on, and unrig them when the work is complete", even though that will make his very, very long day even longer. But I think the better plan is to do the safe thing, obey the law, and respect that worker.

If a generator interlock is impracticable, you can install a subpanel and move the loads you want on generator into the subpanel. You only need a "main-lug" or "no-lug" subpanel. Siemens and Square D "QO type" both have particularly cheap interlocks that use two plain breakers, for $20ish + the breakers.

Five-alarm: A cord with prongs on both ends

Don't do a thing like that. Never. That is an accident looking for a place to happen; somebody will need an extension cord, mistake it for one, plug it in, unfurl, and WHAMMO.

Anyway, there's no need to do this. There's a thing called an inlet that is specifically for this. It looks like an outlet, but has prongs instead of a socket. You plug a "normal" extension cord into it (by "normal" I mean it has a plug on one end and a socket on the other, and the two are compatible, i.e. The cord can plug into itself.

If that's too expensive for you, then replace that receptacle with a flat plate with a knockout in it. Get a flexible cord about 2' long, splice it to the wires in the box, have a strain relief where it leaves the box through the knockout hole, and put an appropriate plug on the other end so it could plug into the generator (except it's too short, make it so it can't touch the ground). Then use a short extension cord as discussed above.

A house's electrical system should have exactly one place where neutral and ground are bonded together. That will be inside your main panel.

That means if your wiring out to your generator is 3-wire hot hot neutral, I'm not going to lose any sleep over it, because even though it's not Code, it kinda fixes a problem.

If your airplane has a fuel leak and a wing about to fall off, don't worry about the faulty navigation light.

Not sure where you're at but the NEC does not allow any direct connections to your main panel from a generator unless you have the proper transfer switch with an interlock to prevent you from backfeeding into the power grid. Can you do it? Yes, you can make the adapter with a twist lock plug that fits most generators and your "halloween" type outlet with the cable in between. Should you do it? No, it's against code and can be very dangerous for utility workers trying to restore power. If during an outage a utility worker see this type of hookup, they will pull your meter for their protection and might just forget to put it back in when the power's restored.

I'd say a big NO, because there is no ground.

Watch this, this will help you buy the right stuff for your own safety...

Not the answer you're looking for? Browse other questions tagged electrical generator or ask your own question.

20
Can I backfeed a portable generator into my house's electrical system?
4
What do you call a DIY AC plug?
0
Two outlet stopped working after turning on electronic cauterization device
1
Generac Generator with Carrier Infinity Heat Pumps
2
Who can I ask to install a 30 amp rated range on a 30 amp circuit (not as easy as it sounds)
0
Question concerning power outlet
4
Can this junction box wiring be used for a duplex receptacle?
0
Generator wattage via their breakers
1
Battery Backup for 240V (USA) Water Well