Good morning electrical geniuses, here's a problem for you.

I have a piece of equipment that requires a 220v connection, and I do not have the ability to run a 220v line from the breaker. Is there a Y adaptor I could buy to combine 2 different phases of 110v to create a 220v power strip? all of the 110v outlets that I have access to are 20a breakers, so would this new 240v line give me 40a (assuming the hardware and wire gauge can handle it)?

I'm not an electrical engineer, I'm a mechanical one... Help, please :)

Edit 1: @ThreePhaseEel Here are photos of the electrical panel. The room with my specific panel is locked, but this is one of 3 identical rooms per floor, 4 floors. The room next to mine is occupied by someone who only has things plugged into the walls in the room, so if our bathroom receptacles are connected It won't matter. 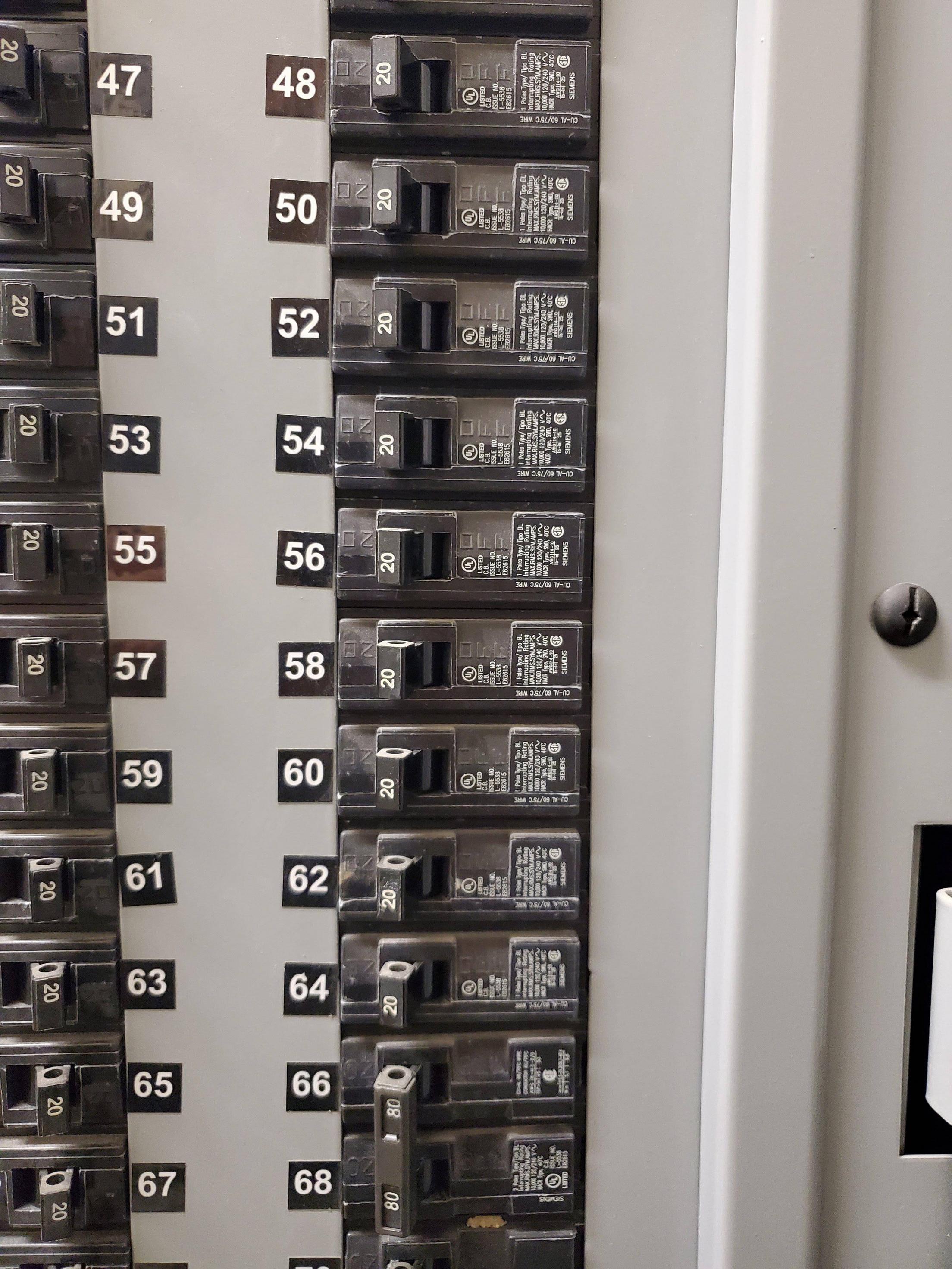 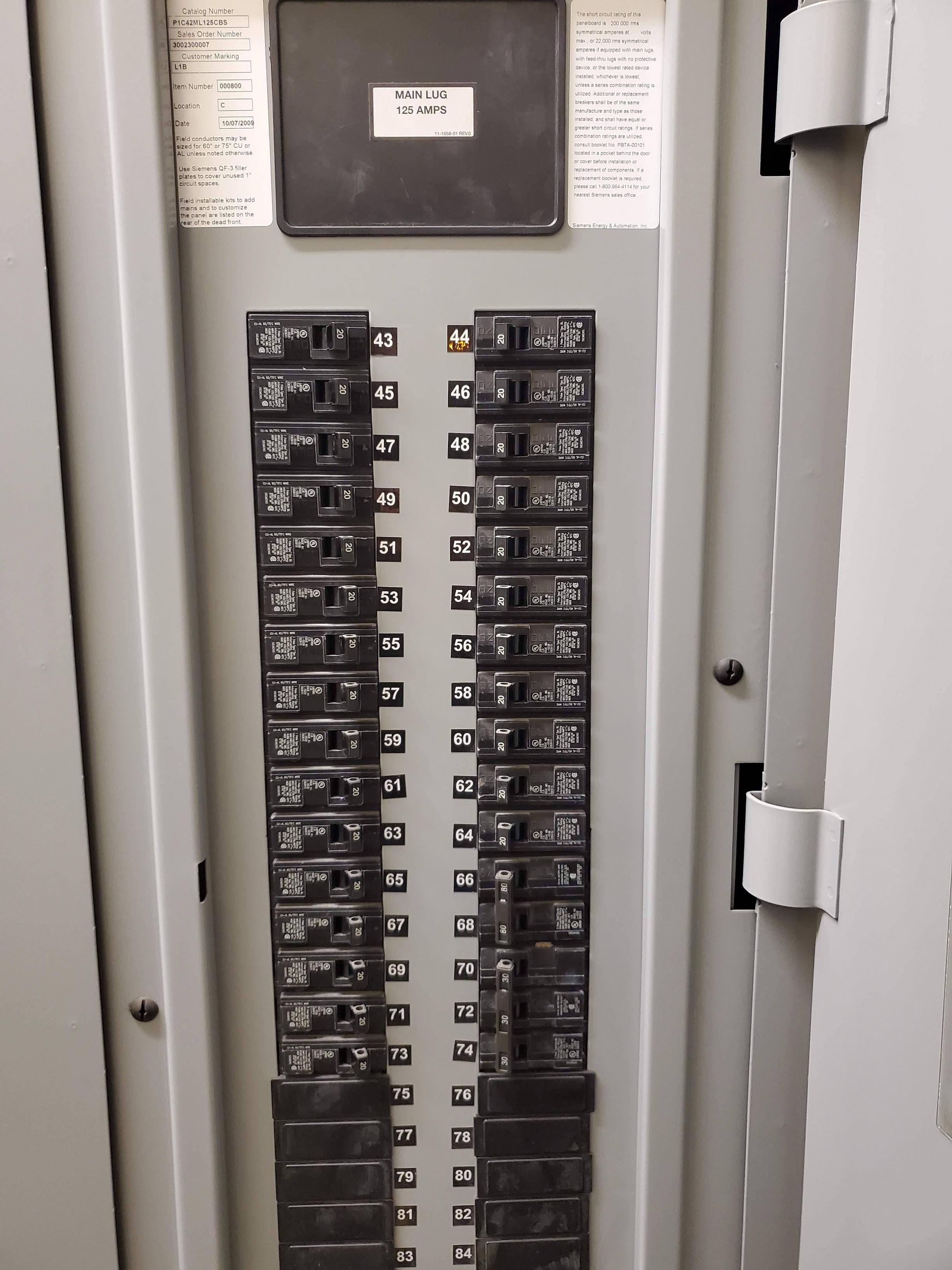 Huge problems with this. Gigantic.

If a breaker trips, you'll be backfeeding the tripped circuit.

"What could go wrong?"

So your machine is loaded between circuits A and B, and SNAP! Circuit A breaker trips. Your machine stops working, of course.

But what happens to the other loads on circuit A? They're dead right? No sir, they are not. Power from circuit B is traveling through your machine and ending up on circuit A. Now, it's pulling circuit A's voltage toward circuit B's voltage.

What does this mean for other appliances still plugged into circuit A? Oh, they're getting power alright, from circuit B through your machine. So they're going to power back up, even though one of them just tripped the circuit. But it will be weird, because those appliances (together) will be in series with your machine. So voltage will be rather wack-a-doodle, and that can cause problems for some machines.

You insist that nobody will be affected but you. Except you want to tap a circuit that's shared with your neighbor. Which means not only could they cause the breaker trip, they could be the victim of the above effect.

Current will be traveling in a big circle.

And that's a huge no-no when you are dealing with AC power. That is because AC creates inductive effects - this is the reason transformers work. You are causing high EMFs, which in turn cause vibration, which causes fatigue and arcing failures, and eddy current heating in anything metallic anywhere near the imbalanced wires. And the wires are running through all-metal conduit. That reduces the chances of fire, but wildly increases the eddy-current losses; you're essentially turning the conduit wiring system into a giant electromagnet. That could cause voltage drop at the appliance, which for a switching power supply will cause it to draw even more current. So all of your numbers could be wrong.

These eddy currents/heating/rattling-vibration problems are much worse at higher currents. And you are planning to run this circuit near limits.

Two plugs on the same cable

You're violating the "No cable should have two pointy ends" rule. The reason for that rule is it's possible for one to be plugged in while the other is in your hand. So that means you can get nailed by it, since one prongy end plugged in will make the other prongy end hot. You can trip over a cord and pull it out and have it hit you. Or it can short against equipment, causing arc damage (kind of a big deal in a rental) and potentially starting a fire. There is no (practical) way to make this thing fully de-energize until both plugs are plugged in.

Dude. You're in a large commercial development. You don't have "220V" (actually 240V). You have "190V" (actually 208V) 3-phase. When you figure the additional losses from turning your building into a giant electromagnet, say your practical voltage is 180V.

Now take your "3200W" load. Is that load really 100% power factor? I kinda doubt it. It's probably more like 80% power factor, which means if it's drawing 3200 watts, it's drawing 4000 VA. VA is the number we have to worry about with breakers and provisioning power.

In other words, not even close.

But go read your machine's labeling and instructions and see what it says about 208V operation.

The thing about this building is, it's a commercial building. It's wired in metal conduit. That means a competent electrician can fish a couple of blue wires through the existing pipe, and hook you up with a 208V dedicated circuit that's all yours. It can be a 20A circuit if your device is able to work on that (given the above provisos), or a 25A or 30A circuit if the numbers show that it needs that.

So the right answer here is to ask management for the service you need. It's not far out of their way.

They even make a "dual voltage" 120V/208V receptacle that can go in any normal (non-GFCI) receptacle location. That will comply with certain Code requirements that require 120V receptacles at a certain spacing.

Do not do this with your idea to make or get some type of Y-adapter. It is just too crazy dangerous to do this. In addition the fact that you have to ask this question here to learn about it is a demonstration that this is not a good idea. There are many factors that have to be considered and even in a few comments under your question not all of those factors will come out in discussion. This will leave you thinking that you fully understand the issue when in fact you would not.

I know you claim that you have control over things and that you would subscribe to the safest handling of a kludged up connection system .... but STOP here. Do not do this.

Hire an electrician to do this properly. I know you said you have to wire this yourself but I suspect that you say that because you may not even have legitimate grounds to even consider changing the wiring. The community nature of your building with power panel behind a locked door seems to indicate that you do not have the free right to go changing things like this.

Sorry to have to sound so harsh about this but crazy ideas like this have to be stopped before they get out of hand and someone gets hurt, killed or serious property damage occurs.

I have done this before, and it worked perfectly. All of the other offered advice in the comments are valid, as this can be dangerous if someone besides you will be around that could be handling your cabling. As mentioned previously, you would have to source your current from two different outlets that are out of phase with each other, and the total current available will be that of the lowest value breaker on the two circuits, in addition to any other load on any one of the two circuit breakers.

Just to clarify again, I have successfully done this, but it is not recommended, and should only be attempted temporarily in carefully controlled situations...

Not the answer you're looking for? Browse other questions tagged electrical junction or ask your own question.

0
Converting a ceiling recessed light to a wall outlet

6
Can I using a 3-phase connection to power 1-phase AC unit?
3
What amp breaker for 20 Amp electrical oven and 40 Amp electrical range on same circuit
3
Is one circuit connected to two breakers safe?
1
Chinese Breaker Box (240v split-phase?) Lacks Neutral Wires and Grounding Bus
0
AFCI/GFCI Breakers Trip Intermittently/Simultaneously
2
40A Cooktop on 30A breakers
0
Bath and Closet electric wiring what type of wire and how many circuits?
3
Can I run THHN for separate washer and dryer circuits through the same conduit?
1
Solve washer/dryer closet outlet issue. Lacks 110v outlet, need to know my options