I’ve just purchased my first home and have many improvements to make but seem to have way too many useless tools cluttering the garage and as they are outdated I’m looking to replace them for a multi purpose tool or two. I need a tool which will be

I desperately need to get some shelving and fixed storage up on the inside of my bricked garage and a mailbox fixed to wooden front door and fun lots of hooks to wooden fence. Help!!!!

A 10.8V/12V battery-powered combi-drill with switchable hammer action will satisfy most of your occasional DIY light-duty tasks and will not be heavy to hold for extended use. It will probably struggle a bit with larger holes in masonry but if you only do a little of that it will be adequate.

Usually there is a three position switch:

Most drills will have a speed switch with two positions. Use the lower speed for larger drill bit sizes. 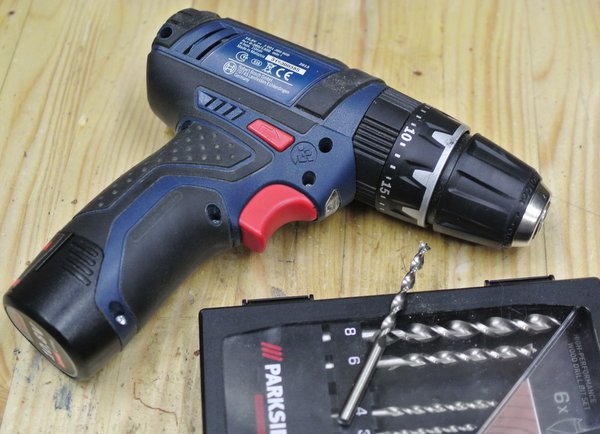 Example name-brand "pro" product available in UK for around £75, The Lidl "high performance" brad-point drill-bits are a real bargain too

If you expect do a lot of drilling into masonry, a mains-powered hammer drill is probably a better choice for a low-cost tool.

What you're after is usually known as a combi drill. It's a combination of an ordinary drill and a hammer drill.

With regard to the "weak wrists" aspect, I suggest wearing padded gloves (like cycling gloves) because many drills, when stopped, give a sudden kick-back torque which is more of a problem than the weight of the drill. It makes the difference between pain the next day and no pain.

An impact driver, which you mentioned, is for driving screws and nuts at a fairly high torque (think of the tool a garage mechanic uses to remove wheel nuts). An impact driver is not what you need for the described tasks in order to keep in budget.

This isn't a site where product recommendations are on-topic, but the Bosch PSB 1800 is a competent tool and fits in your price range. The same manufacturer does a drill accessory set which is likely to include all the bits you'll need for what you describe.

Do have a practise go on something when you get a new tool just to get an idea of what it does.

If you find that a hole isn't being drilled at a reasonable speed, poke into it with a screwdriver to feel if there's some obstruction of a different material than you're expecting: if you're using a masonry drill bit then it won't go through metal, and the metal could be a water pipe or conduit for electrical cables.

If you are buying screws for putting things up, Torx screws are easier on the wrist because you don't have to push on them for the driver bit to stay engaged.

For assembling flat-pack furniture, it's best to use hand tools for the first couple of fasteners to get a feel for how they work - that's what they're designed for - and see if you think a power tool would actually be any better. (I would however suggest investing in a set of Wera metric hex-plus keys if you have a lot of furniture to assemble which uses hex socket screws. And a wooden mallet.)

This may be over kill for your needs, but as you gain experience you’ll appreciate its capabilities. The Milwaukee m12 hammer drill has hammer and drill modes, as well as a clutch to tighten screws to a certain tightness and then ‘slip’ the clutch to prevent over-torque. It will drill concrete and brick with a good hammer drill bit set (I like Bosch bits). Amazon link here https://www.amazon.co.uk/Milwaukee-4933440380-M12-Fuel-Hammer-Drill/dp/B00G7RWH4C/ref=mp_s_a_1_1?keywords=m12+hammer+drill+milwaukee&qid=1566650655&s=gateway&sr=8-1

I’ve used mine for over 7 years and although it’s banged up, it still has plenty of power.

Yes it will take all the bit-holders and bit combinations as cordless screwdrivers, but it is definitely heavier and can be tiring on long builds (think ikea pax wardrobes), but for most jobs the utility and flexible power is worth it to me.

As an aside, I wouldn’t toss out all those useless tools, you may find a use for them later. The biggest mistake I made is tossing out old tools and then having to rebuy them for a one-time job.

I have only used my hammer drill three times, and only once for a job where I couldn't possibly have gotten away with a normal rotary drill. I'm glad I got it second-hand.

I use my ordinary cordless drill pretty much every weekend. It was well worth the $100USD I paid for it new ~6 years ago, and I'll probably buy a similar model when the (now discontinued) battery finally stops holding a charge.

It's generally more useful to have a good drill than a mediocre hammer drill, unless you know you're gonna be drilling into concrete sometime soon. For softer masonry, a rotary drill may or may not do the job. You can often rent even smaller power tools fairly cheaply in the US (or at least where I live), not sure if that's common in the UK though.

I use an impact driver at work, but have never had anything my cordless drill couldn't torque at home. For assembling furniture (I generally build my own using #2 pine and drywall screws), I always reduce the torque on my drill anyway to prevent splitting wood.

Not the answer you're looking for? Browse other questions tagged tools drill uk screwdriver or ask your own question.