I want to install a 40A electric vehicle charger (probably a ClipperCreek HCS-50) in my unfinished attached garage in the Puget Sound area of Washington State. I intend to have this inspected and permitted, but it's been a good learning experience in a variety of ways already.

I haven't installed a branch circuit before, but this seems about as dirt-simple as it could get: the location I'd like to put the EVSE is about 20 feet away from my service panel, which has open slots on it and sufficient extra capacity in the 200A mains breaker.

To do the install, I've purchased 25 feet of 6/3 NM-B (ampacity 55A) and a 240V 50A breaker that matches my panel brand. I will run the 6/3 along the same path of already drilled holes in the exposed studs to the point where I'll put a NEMA 6-50 receptacle. 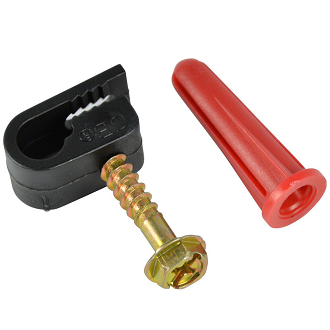 Are there any major obstacles I haven't accounted for, or any likely gotchas that I'll hit during an inspection?

This is similar to the question Questions regarding my plan for new 50A circuit (with pictures), but I believe it's sufficiently different to merit its own question.

If it's cord-and-plug, you need a GFCI breaker...

625.54 Ground-Fault Circuit-Interrupter Protection for Personnel. All single-phase receptacles installed for the connection of electric vehicle charging that are rated 150 volts to ground or less, and 50 amperes or less shall have ground-fault circuit-interrupter protection for personnel.

...but, leaving the wires nutted off in the box is OK for a hardwired setup

If you intend to hardwire it, though, you can simply terminate the circuit into a junction box with some wire nuts (and a cover if you intend to install it after the final electrical inspection).

Getting the cable into the box requires a cable clamp, made of either plastic or metal; this goes into a knockout in the box and holds the cable jacket firmly in place. However, some plastic boxes have integral cable clamps instead of knockouts; with those, you do not need to install a separate clamp.

Attaching the cable to the studs near the endpoints is done using a NM cable staple or strap; these have a somewhat rectangular profile to them to match that of the NM cable itself. (The clip you depict in your photo looks to be intended for low voltage wiring such as coaxial and communications cables; a NM cable will simply be too big to fit into it.)

Not the answer you're looking for? Browse other questions tagged electrical wiring garage or ask your own question.

1
Questions regarding my plan for new 50A circuit (with pictures)