Was this countertop stabilized properly?

I'm in Florida and recently moved into a new apartment complex. One issue we submitted for maintenance relates to a countertop you can see in the attached in the pictures. Basically, there were no brackets under it and it wobbled significantly. It looks like there were brackets previously, but were probably removed when a new counter was installed. In the pictures you can see how they resolved it. I'm not clear what type of brackets they are or what their intended use is, but they don't seem appropriate for this type of task. Am I wrong? Their placement/number also seems inappropriate; 3 total, one centered on each side and one at one end. The counter IS substantially more stable, but the end without brackets still has a little give. If it was my own house, I would have used heavier/longer brackets; two at each end at least. Is this something that we should ask to be redone? 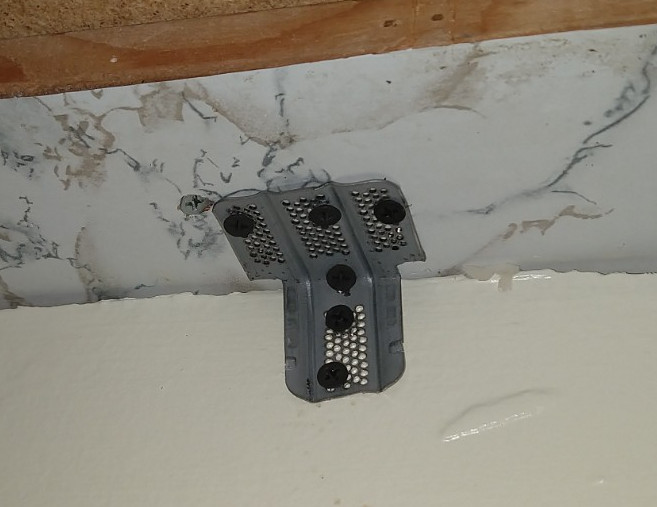 What you're actually looking at are drywall clips. They are used to patch holes in drywall by supporting the patch to the existing wall.

Here's what they look like before being bent and used incorrectly.

The counter wasn't designed for this unit. My concern is that those screws are in drywall and will pull out. Definitely don't sit on that counter or put anything heavy on that edge. This should be fixed right before someone gets hurt.

You should not need any brackets for that countertop. There is not much of an overhang (that I can see). That piece of plywood with the marble formica those brackets are screwed into, that plywood should be firmly screwed into the wall it is sitting on. (can even use construction adhesive to make more stable.) then the countertop gets attached to that plywood by screwing through that marble covered plywood (you can see a silver screw in your pic next to that "bracket" and into the bottom of the counter. Again, construction adhesive and screws and the counter will be solid, even if it had a 2 foot over hang. That plywood should cover most of the bottom of the counter... Should go almost up to the buildup. Maybe not enough screws were used securing the plywood or counter...

Not the answer you're looking for? Browse other questions tagged countertops brackets or ask your own question.