Is it safe to remove the bottom chords of a series of garage roof trusses?

See attached picture. Looks like an 8x10 cut-out. He wants to lift cars up so he can walk under them.
Is this safe? Doesn't removing the joists affect structural integrity? 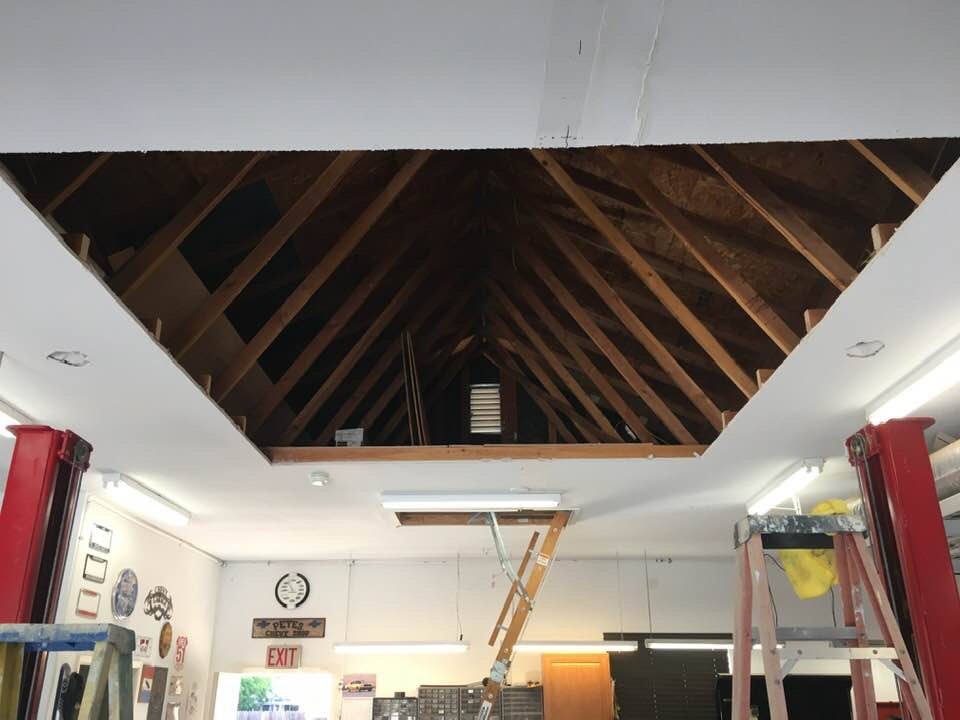 Those trusses were engineered with a heavy (critical) dependency on the bottom chords, which are in tension. Removal has left them extremely vulnerable to collapse due to spreading, especially under snow loads, but also under just the load of the roof itself. The roof system is basically a hinge now.

To get a good mental image, picture yourself standing on an ice rink and sliding your feet outward. How far do you get before your groin starts to scream at you?

Best case scenario, that ridge slowly sags over the opening and looks ridiculous. It will push walls around with it, cracking drywall and binding windows. Worst case, full collapse. Death. Destruction. Worst of all, humiliation.

Repair will require new lumber installed with a suitably fastening system, such as construction adhesive and through-bolts. It may be necessary to winch the walls back into alignment first if sagging has already begun.

With no bracing above, you might want to check the out side walls - they are probably already spreading. Once they start moving the stabilization and repair can cost many thousands if the roof stays in place, tens of thousands if it comes down.

There are ways to mitigate the damage done, but it needs to be done now before the walls spread, the rafters move and the roof leaks if not collapses. Yes I have seen bonehead DIY hacks like this.

Steel plates in the outside walls with cables to pull the walls back together, repair the damage to the rafters, new bracing with some engineered cables added.

I would suggest getting the bracing and cable system installed now or it will cost much more than the lift and the loss of use if the roof comes down.

The triangle is an extremely stable form of architecture precisely because it has three sides. You remove one side, and you have one of the least stable forms of architecture on account that two members connected at a point can be affected by torque, which is by definition a force multiplier. If you want to play around with it to get a sense, try gluing two Popsicle sticks and three Popsicle sticks like the design in the picture above.

Any force directed downward will because of the elasticity of the wood create force outwards. If the members were steel, there would be substantially less deformation resulting in less outward force, but lumber is relatively flexible.

Now, it should be noted that some of the horizontal members are still in place, as many as half, and those runs will make it unlikely the structure will collapse under normal conditions, however, heavy winds or heavy snowfall, as mentioned in other comments, likely to create outward stresses in the middle section of the structure. The exact details of what will happen will largely be a matter of detail. To some extent, existing construction code generally overengineers a solution to ensure that minor failure will not result in human harm.

It is possible to create both the space needed to elevate the car, and have a structurally sound garage given the picture. For instance, additional chords can be installed low enough to recreate trusses, but high enough to accommodate a raised vehicle. There are a number of truss styles that do not use a horizontal bottom chord, the scissor truss for instance. And using steel as a construction material can help to redirect the tensions through materials more capable of absorbing the load. Lastly, the walls themselves can be modified. It was typical of cathedrals to buttress on the exterior, the wall to handle high-arching ceilings, for instance.

Construction is often a question of engineering as much as it is design, and if safety is a concern, such as it might be in this photo, consulting a structural engineer would be the right thing to do. Structural design is their expertise, which would be my recommendation.

It may work IF the roof is re-engineered to carry a lot more of the stress across the top and bottom of the cutout. That means a much beefier horizontal beam on all four sides of his hole AND a rework of the roof by re-trussing the entire structure. 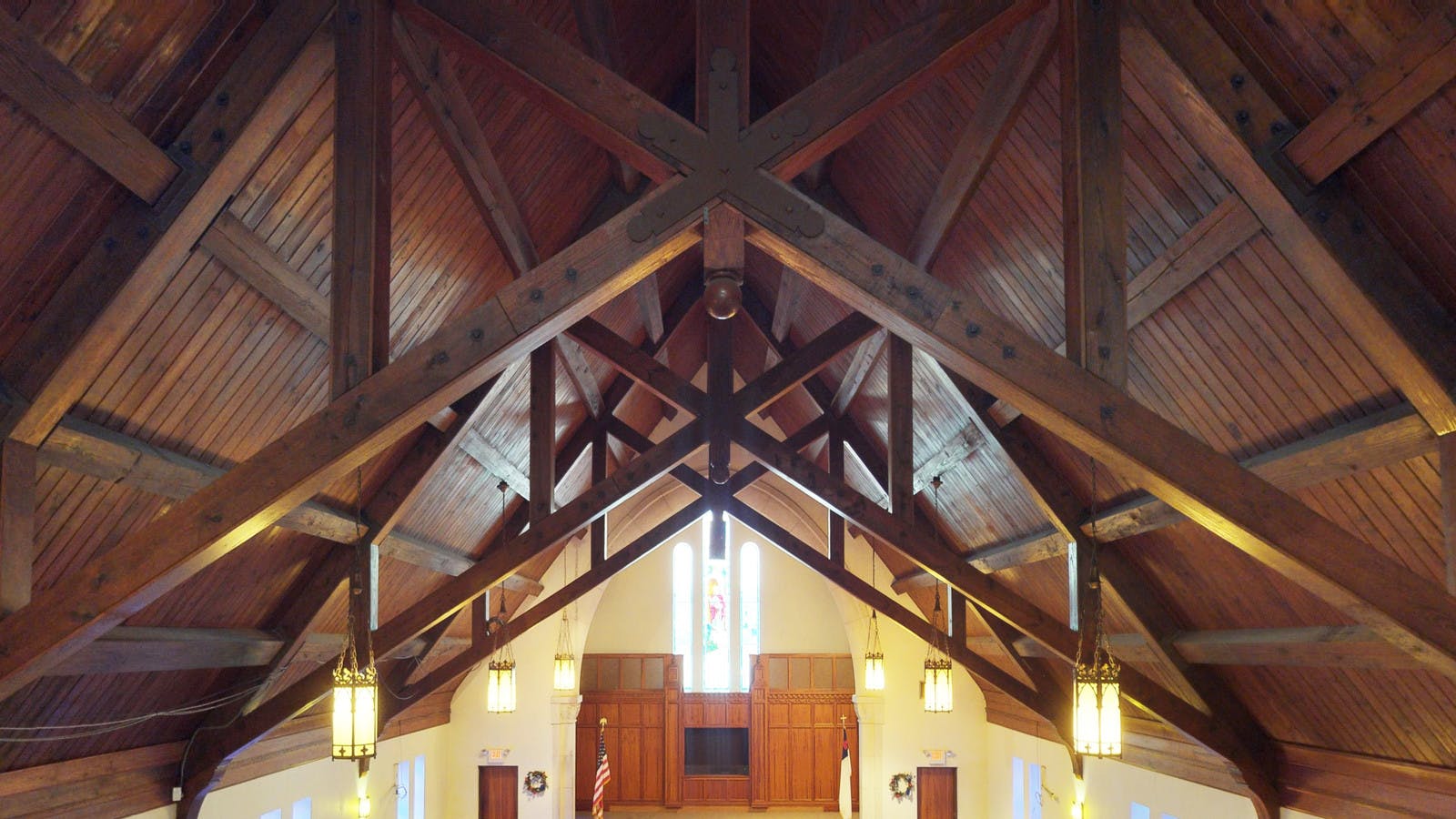 This one is a Scissor Truss, and also wears the more general name "church truss" or "nave truss" Note some of these have thinner tie rods across the middle exactly where the bottom chord would be - those aren't suitable. 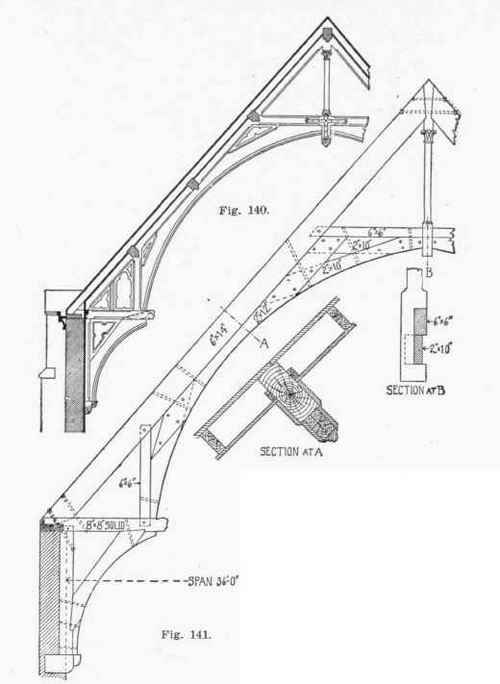 A little ornate for a workshop, but you can see how the load is being brought down to the walls with inner buttressing.

This one is called a Coffer Truss and as pictured would work perfectly. However the thickness of the rafters (top cords) would have to be increased several-fold to cope with the extra stresses. As pictured, this one would expect to have supporting walls/posts straight under the lower "corners" so would require a vertical post straight down beside the car lift's posts. That could be workable, if these new posts were properly footed into/onto the existing concrete floor.

This would work too - depending on how much height there is at the top of the wall. 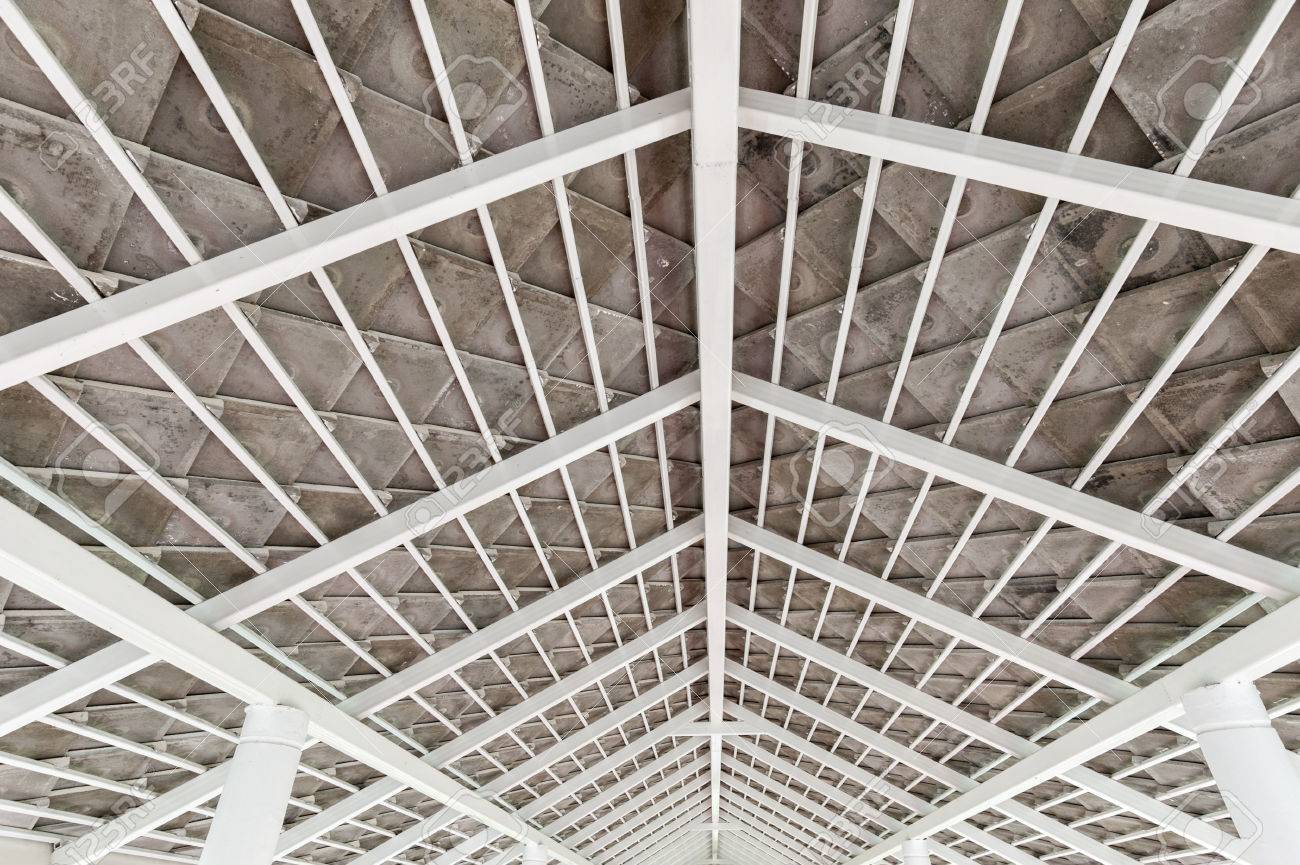 Last option is to completely reframe the roof with steel trusses, and do away with the wooden ones. Properly enginerded steel will have more strength than the wooden ones while allowing the open space required.

Any way - whatever creative handyman did this has made a difficult job into an utter nightmare of a job. It would have been less work to remove the roof and then re-truss leaving the bottom chords in place to support the walls until the new roof framing is on.

Frankly, it would probably have been cheaper to build a new garage rather than monster the existing one and now have to repair it.

Now that everyone has upvoted this as unsafe, I’ve got to take the other side of the argument for several reasons: 1) it’s not a truss, 2) it’s “stick-built”, 3) either side could be removed and the remainder would be stable, 4) horizontal structural support is elsewhere other than in the center horizontal span,

1) Look close and you’ll see that it’s not a truss. The structure does not create a truss spanning the room...or it would have collapsed immediately...especially with that much removed.

2) The members are stick built. The roof member spans from ridge to next support...diagonal brace. The roof member is in both tension and compression. A truss member is in EITHER tension or compression. (That’s why “double bending” in truss design is so dangerous.) The loads are transferred down the diagonal members to the walls or cantilevered beams over walls. In truss construction, loads are transferred to the END of the truss.

3) If you look at the right side you’ll see that it could be removed and the left side would remain structurally sound. That’s an indication that it’s not a truss structure , but a stick built structure. (One half of the roof structure looks like a picnic shelter.)

4) The horizontal stability is in the end walls, NOT the center ceiling support. That’s why you don’t see large cracks in the ceiling gypsum board.

Now, I said “if” at the beginning. The “if” is in reference to the need that each side must be horizontally stable and has at least 2 bearing points on each side of the opening.....and obviously it is so far.

Not the answer you're looking for? Browse other questions tagged roof safety joists or ask your own question.

7
Repairing a notched floor joist
11
Can I raise a sagging shed roof by winching the walls back into place?

2
How can I build a temporary support for rafters?
0
Is this foyer (wall) load bearing, in a condo
11
Can I raise a sagging shed roof by winching the walls back into place?
5
Would drilling a small hole through joist / sole plate cause structural problems?
0
Joists extended by tecos
1
Board on top of joists in attic. Is it structural?
0
Is it a structural wall
0
Do I need rim joist for this tree house platform? What will happen if I leave them off?
0
How to strengthen two joists that have had big sections cut out to make space for roller garage door