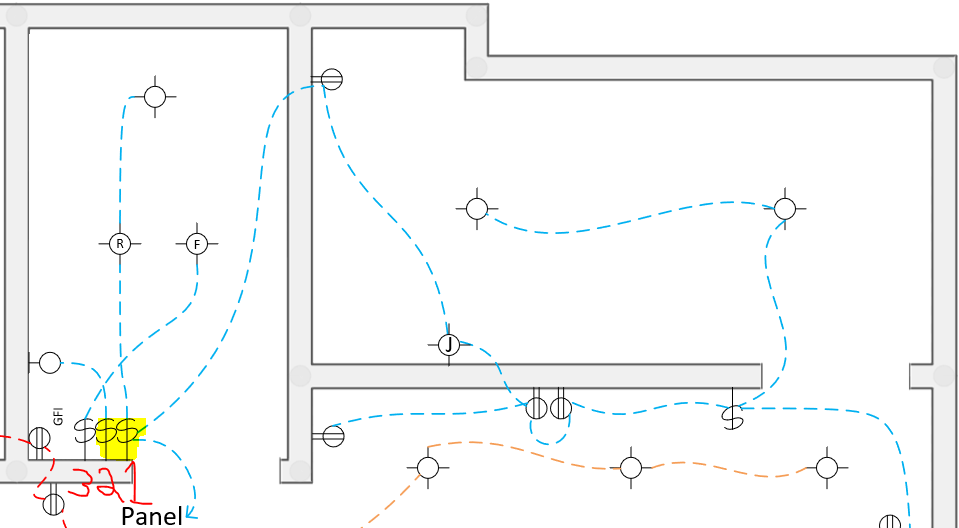 So I need some help (again) with an electrical issue.

I wired the basement and due to some new building code all the breakers are AFCI (which I am suspecting is a part of the problem). In the bathroom there 3 light switches, labeled 1,2 & 3 on image, switch 1 directs to a pot light and an led light, switch 2 goes to a vanity light and 3 is a fan.

For months we haven’t been able to use switch 1 because it will trip the breaker, not always immediately, but usually within 30 seconds. I spent all week trying to solve it, I went into the device box and cleaned up the wires for the switches as best I could making sure nothing was exposed, I replaced the switch (from another one in the basement so I knew it worked). This all improved the issue slightly, in that it took a while longer to trip.

We kept thinking we had solved it and then short time later it would trip again, here is where it gets weird… we discovered an almost surefire way to make it trip was to have both light switches on (1 & 2) and then turn off switch 2 (ie the one that hasn’t been a problem); switch 2 being turned off would kill the breaker as long as switch 1 was on. I pulled out all the lights tested different combination of wiring, such as one light being bypassed or cut off and this more or less holds true. Except now I find it takes the light a few minutes to heat up or whatever before turning off 2, while 1 is on, will trip the breaker.

Anyways there is not a lot of load on the circuit, a tv and SMALL deepfreeze and two lights that are rarely on (pantry).

AFCI is a safety device that is designed to protect circuits from setting your house on fire. You are talking about defeating a safety system because a) it's annoying and b) you have no earthly idea what to do about it. Let's fix b).

It is called an Arc Fault Circuit Interruptor

"Circuit interruptor" is the technical term for "be annoying". "Arc Fault" is the safety hazard it detects. This means arcing and sparking at a poor electrical connection. This causes high heat at that connection, and that can create a race condition where you have thousands of BTUs in a very small area, typically inside the walls where a fire can become fully engaged before you even know it's there (and it's impossible for you to access it to extinguish it while it's small).

We're talking about hour house burning down. No kidding.

If you've ever heard the "crinkle crunch" of speakers being connecting or of a headphone going into a jack, that's the sound arcing makes. That is what the AFCI is listening for.

Connection problems almost never happen in the wires inline in the walls (unless someone ran a nail or screw through them). They are almost always at wire ends, or inside devices such as switches, sockets, or lamps.

The #1 source of arc faults is "backstab connections", which are a lazy way to jab a wire into a hole, and it just grabs. This gives it a single point of contact, and that can be loosened just by the forces on the wire when you cram the receptacle/switch back into the box. That's why most of us remove backstabs on sight, and use the screw terminals only, or "screw-to-clamp" type back connections where you tighten the screw to clamp it.

Going through all your devices on the part of the circuit downline from switches 1 and 2, removing backstabs and going with screw or screw-and-clamp, will help a lot.

Arcing can also come from failing to tighten down a screw enough, but this is far less common than backstabs. That is why Code now requires torque screwdrivers, and you set the torque to whatever the socket specifies.

Let's talk about two tiers of switch and receptacle.

"Screw-to-clamp" has a bonus feature: It allows 2 wires to be back-wired to the same screw. That solves occasional problems where 2 wires need to go to one screw; on builder-grade, they put one on the backstab and one on the screw. With these, you can put both under the screw.

Occasionally, you get a device such as a lamp or fan that has an internal arc fault. If you've tried everything else, it is probably down to that. For proof of the pudding, move the device onto a different circuit (ie. Part of the house that is on a different AFCI breaker) and see if the problem follows the device.

Since it will run for a time and trip I would be looking at the small deep freeze. AFCI’s don’t do well with motor loads and if the load on the circuit is heavy they do not work well with dimmers and lights that require ballast, I would try putting the deep freeze on another circuit and see if things change since it holds until a switch position is changed I would be thinking not a true arc fault issue, or a motor issue as I have even seen bathroom fans cause the fault when turned both on and off. Sometimes a different brand will work better but my state has an exception for circuits with arc fault & GFCI issues (motor, dimmed, ballasts) that I can omit the AFCI for a standard breaker. I always use this exception on fridg/freezer, garbage disposals, sump pumps I will use if a problem on the lighting & fan circuits. So it may be a basic problem with the AFCI and not with your wiring, is your breaker giving a code with flashing lights?

Not the answer you're looking for? Browse other questions tagged electrical circuit-breaker afci or ask your own question.