Why does my house heat up, even when it's cool outside?

The question pretty much says it all. It's probably a ridiculously easy one to answer. It's cool outside but I know that my house is heating up because my AC kicks on periodically. I've had this experience in multiple houses, so I presume it's not just caused by some sort of one-off issue with an AC or thermostat. It seems strange and I'd like to understand why it happens so that perhaps in the future I can make my house more energy efficient.

I'm a life-long Florida resident and have had this experience in a few houses. I've noticed that even when it is cooler outside than in (say the AC is set to 80°F (27°C) and the weather is 76-78°F (24–26°C) outside), my AC still runs periodically throughout the day. Note that the obvious answer is "Just open the windows", but for those not familiar it is usually 80%-90% humidity outside, and even 76°F (24°C) isn't pleasant at 80% humidity (it's also a recipe for mold, which has been a problem for me). Basically, there are only 1 or 2 months of the year when it is both cool and dry enough to open your windows in Florida (IMO).

In that sense having the AC run periodically is not actually crazy, mainly just to keep the humidity down. However, it still seems strange to me that if the AC should kick on (aka the house is warming up) at all if it is 2-5°F (1-3°C) cooler outside than the temperature I have the AC set to.

I realize this is likely house-dependent, but I've lived in more or less the same "kind" of house for the past decade or so: wood frame, insulation-in-attic, single pane windows, and a few trees around providing shade for the house (although certainly not enough to shade the entire roof).

I presume this is a sign of some general inefficiencies in my house's thermal-insulation-design. Why might my house be heating up even when its cool outside?

For the most vivid example of solar gain, sit in your car with everything off - A/C off, blower off, windows rolled up tight, doors shut tight. You can't. Your body will force you to open a door or something because it will become unbearably hot within minutes.

If it were always night, or if your house were entirely in shade, this would not be an issue. However, your house is in sun, and that means it is being actively heated by about 100 watts (300 BTU/hr) per square foot (around 1 KW/m²).

That's really a square foot directly facing the sun, so it'll be less if you're not at the equator at noon... but walls count too, so that's kind of a wash. The reflectivity of the roof and walls help. So let's say all in all, 50% gets through.

This is why a car with 48 square feet (4.5 m²) of cabin gets so hot so fast - it's intaking 2400 watts/8000 BTU/hr of heat. That's the heating power of an oven. This is why leaving a baby in a car is so serious. I'm not equating a house to a car, just pointing out that solar gain is not to be armwaved or ignored, and is definitely your #1 load by a wide margin, maybe even by an order of magnitude.

Yes, this is a stupidly large amount of energy. Too bad we can't harness it for something, eh? :)

Insulation slows it down. But only slows it. Given enough time, it still gets through.

Thermal "mass" works both for and against you. The thermal mass inside the insulation envelope helps your house resist changes in temperature. However the thermal mass outside the insulation envelope (roof, joists etc.) has been warmed by the sun all day, has reached 120-140F (50–60°C), and holds that heat for a few hours after sunset. That means its high heat is still trying to push through the insulation even after the sun has gone down. Conversely in the morning, even with full sun, you get some relief before the roof and joists heat up.

At least it's more efficient...

Your A/C unit interchanges with air, and in your case, you are saying the ultimate heat sink is cooler than the thing it's cooling. That gives a heat pump an advantage; it is pushing heat "downhill". You can check it with a load monitor (if the cycle length doesn't make it obvious), but you probably aren't using near as much power as on a hot-air day.

It's even better, of course, to interchange heat with groundwater. But that is a more specialty unit.

Because you have indoor heat sources

There's a lot of reasons your house will get warmer than the outside temp, but this is the single largest one.

Add all these up and you'll find your house reaches the necessary temp to kick on, even if it is cooler outside

In addition to the other answers that address your question for the most part, there is one more possibility I can think of. It is possible that your AC is not only trying to get the inside temperature to the target,but also the humidity.

Some high-end thermostats will have a humidistat built in, while it is a separate unit in other cases. Regardless, some AC systems are setup to also run when the humidity inside is too high. Some systems have special modes for this, that somehow don't cool as much, but pull more humidity out of the air they handle (probably at a loss in efficiency, but I don't know for sure how this works), while others just run like normal, causing it to get colder than your target temp inside. In US brands, I think one that I've seen the built in de-humidifcation feature a lot is Trane, but others may have it also.

Because an Air Conditioner doesn't give any airflow between inside and outside. An AC is essentially a refrigerator. Inside is the conditioned space, and outside is the heat dump (i.e. the back of the fridge where it's hot) The heat is transferred from inside to outside via the liquid coolant - it evaporates inside, collecting heat due to the latent heat of vapourization, and compresses outside, giving off this heat. This is a closed system, contained almost entirely in sealed copper pipe.

There is no air transfer between outside and inside. So, if your inside temperature is higher than the thermostat set point, the AC will run -- regardless of the outside temperature. If you want to take advantage of the lower outside temperatures, then you need to bring outside air in. i.e. Open a window, which you have good reason NOT to do given the humidity.

As a simple thought experiment, we could remove all insulation from the house, and then your internal temperature would be a better match to the outside, as the purpose of insulation is to significantly reduce heat transfer through the walls and roof. However, this plan would be advantageous for only a few days of the year.

In addition to Machavity's answer, I'd also like to comment on solar warming. The sun hits your roof, and adds heat. This heat transfer is mitigated by the roof insulation, but not eliminated. Another source is the sun hitting the windows. Even if you have curtains or internal blinds, a lot of heat enters the house this way. The best way to mitigate this is with external blinds or shutters. These stop the sun from hitting the glass and causing a greenhouse effect.

There's nothing wrong with your thermal insulation design. Insulation is designed to isolate your inside temperature from the outside temperature. So your a.c. is set to 80°F (27°C), then at 3am the temp outside slowly drops to 76°F (24°C)... it will take hours for your inside temp to see the difference because you attic is still going to be hot. By the time it could see the difference, the outside weather is heating up. The same happens in the winter. Your inside temp is at 78°F (26°C), we have a cold snap (yes, I live in Fl too) and the temp drops down to 40°F (4°C), your inside pretty much stays the same. Hope this helps.

Last year I installed a whole house fan similar to the one below. It vents into the attic so when it does get cool out, I open windows and turn on the fan. It sucks air into the house and cools off the attic. I had to install 13 additional soffits in the eves but it was well worth it. 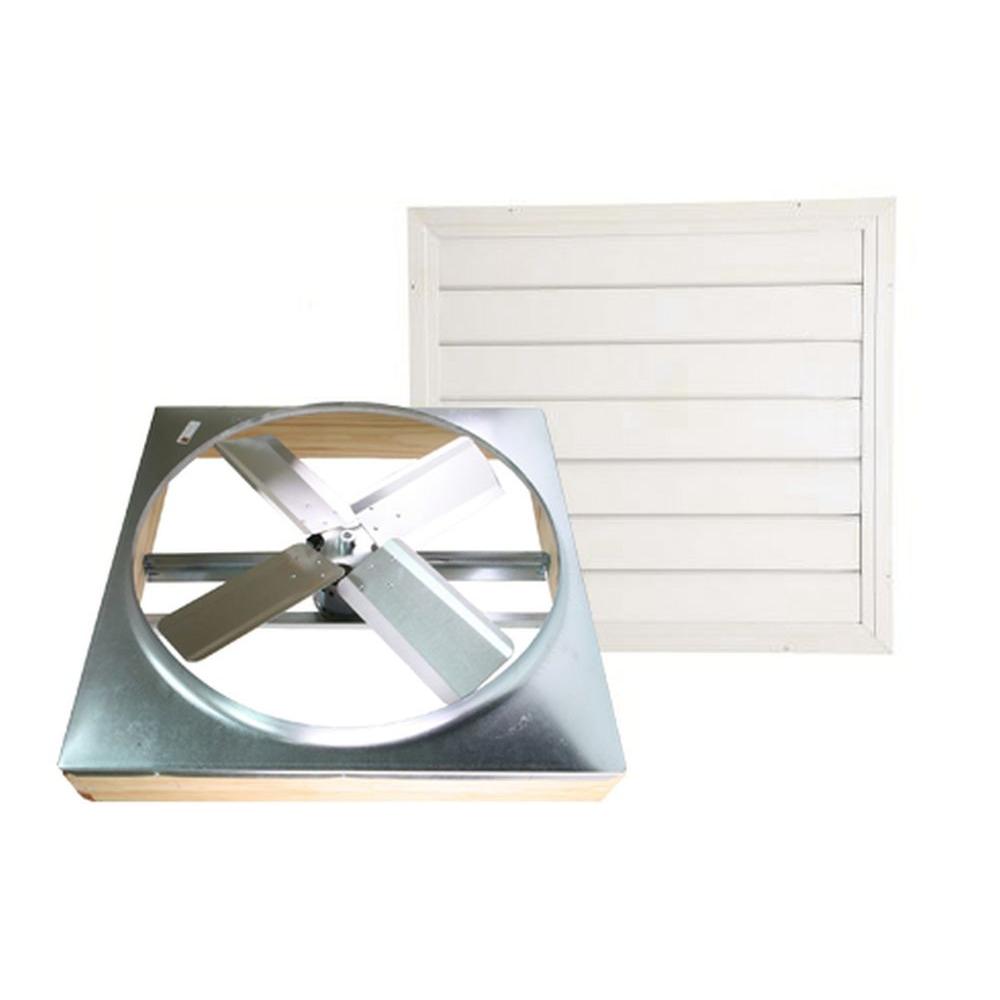 There are a lot of answers that address why it can be hotter inside than outside. But to your point, "it still seems strange to me that if the AC should kick on at all if it is 2-5 degrees cooler outside than the temperature I have the AC set to." The thermostat is inside and has no idea what the outside temperature is. It turns the AC on when the inside temperature is above its set point.

Check your thermostat is in 'cold only' mode in summer and 'heat only' mode in winter (not in AUTO mode). If in AUTO it could be starting the furnace if temperature goes under the setpoint then kicking in the AC when it goes over

Insulation "mass" heats up during the day heating the attic to very high temperatures, such as 110 or 120. Then in the evening when it's cooled down outside the insulation mass is still very warm and is radiating heat, some of which goes through the attic vents but also through the ceilings into the living spaces below. Increasing the attic ventilation by having a ridge vent and wide open soffit vents, not blocked by insulation and using the correct baffles to give the cool outside air free passage from the soffits to the ridge vent, should expedite the cooling of the insulation and lessen the heat transfer to the living space. Also, it's important to block the gable vents because they shortcut the ridge vent-soffit air flow greatly reducing it. It's really that simple.

Not the answer you're looking for? Browse other questions tagged hvac cooling or ask your own question.

9
HVAC system that pulls-in cold air from outside?
2
Storing comsumable dry goods in your car in the summer?

3
Shading windows from outside (awnings, shutters, etc) to keep house from overheating in summer
9
HVAC system that pulls-in cold air from outside?
8
How do you cool a concrete home?
2
Best type of fan for sucking air through a small hole?
2
Why is my air conditioner running when the house is below the set temperature?
42
Can I heat one room and cool another with an in-wall AC?
0
Is moving a desk upstairs/downstairs for comfort twice a year a sign of poor insulation?
2
Will replacing windows significantly reduce solar heat gain in summer?
1
Help with installing the Honeywell T5 - RCHT8610WF2006