I have a sub panel on a finished wall in my garage. I want to add two 20 amp circuits and run them go outlets on two unfinished walls on the sides of the garage.

Is it okay to run metal conduit across the joists above? Does it have to be run along a board or attached to a joist every so far?

Where the conduit reached the inside of the wall, can I run without conduit inside the walls? I plan to finish the garage walls after. 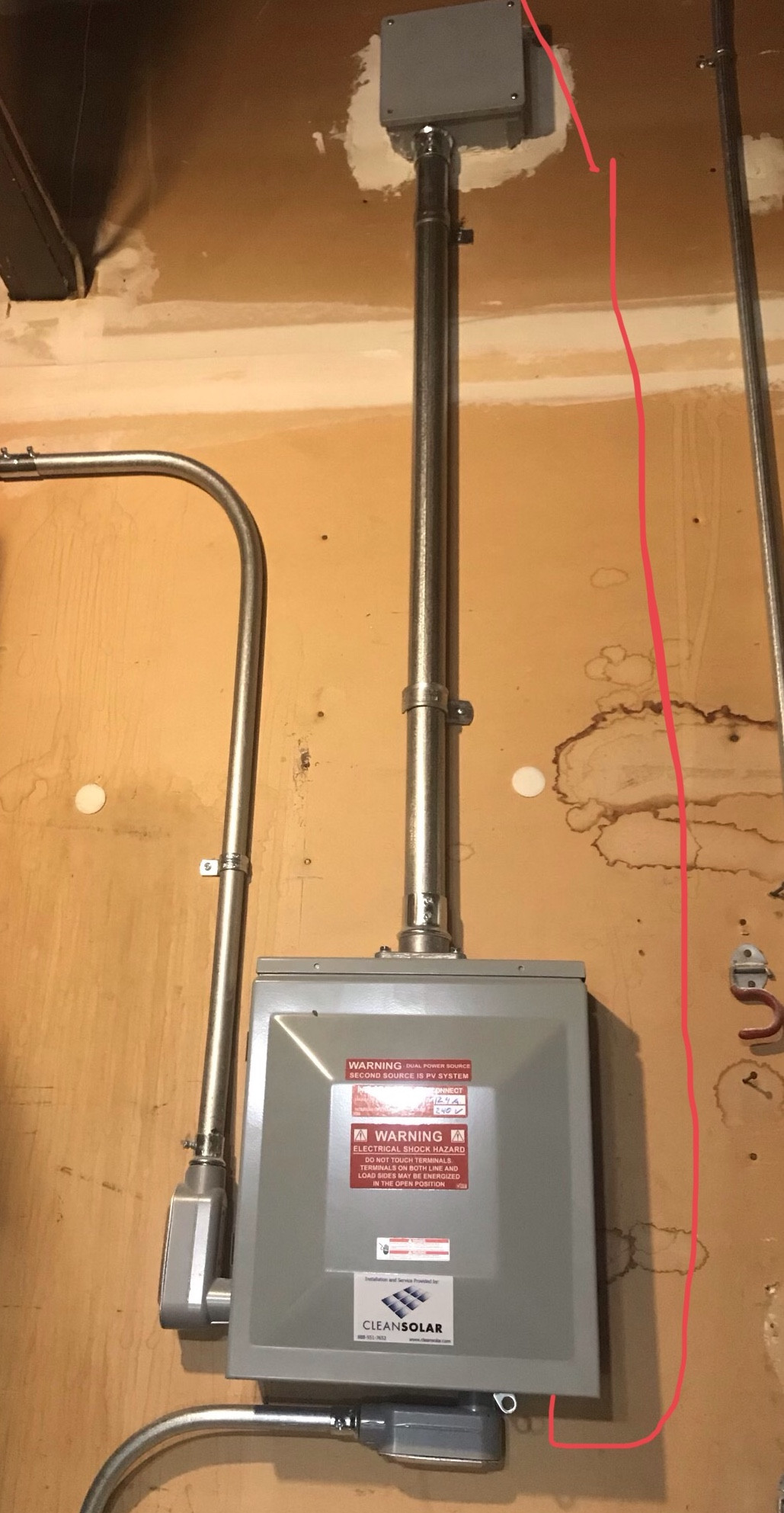 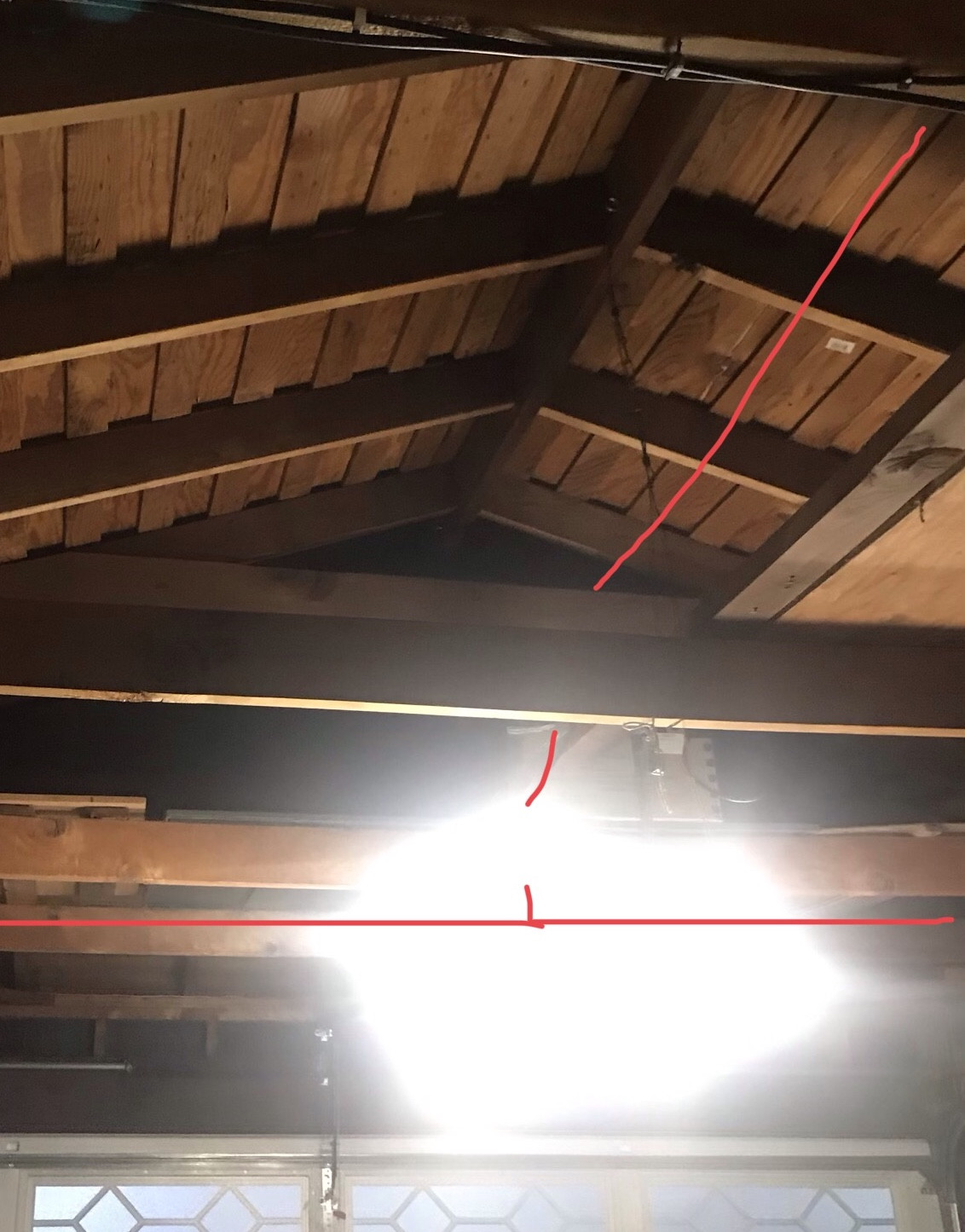 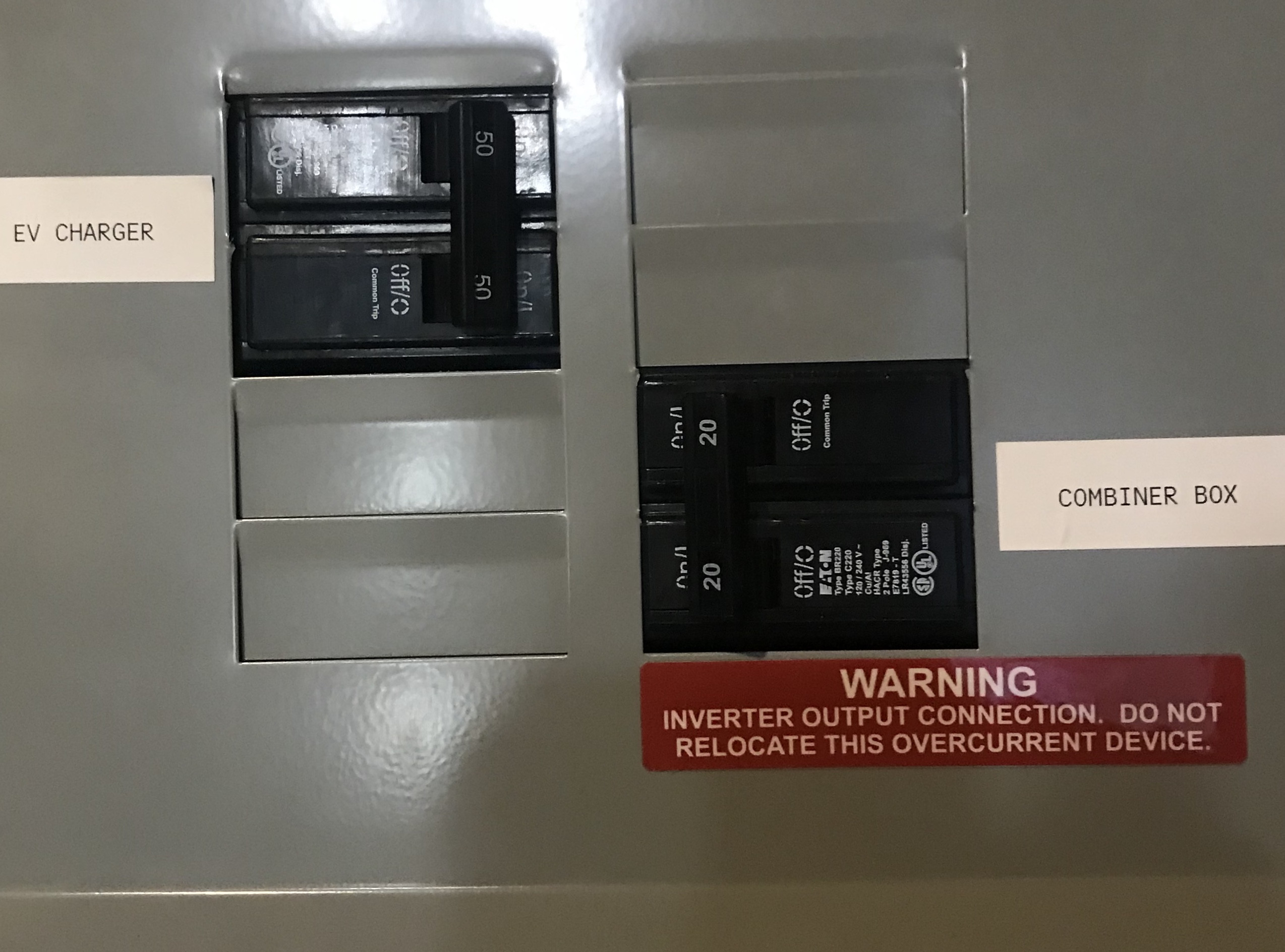 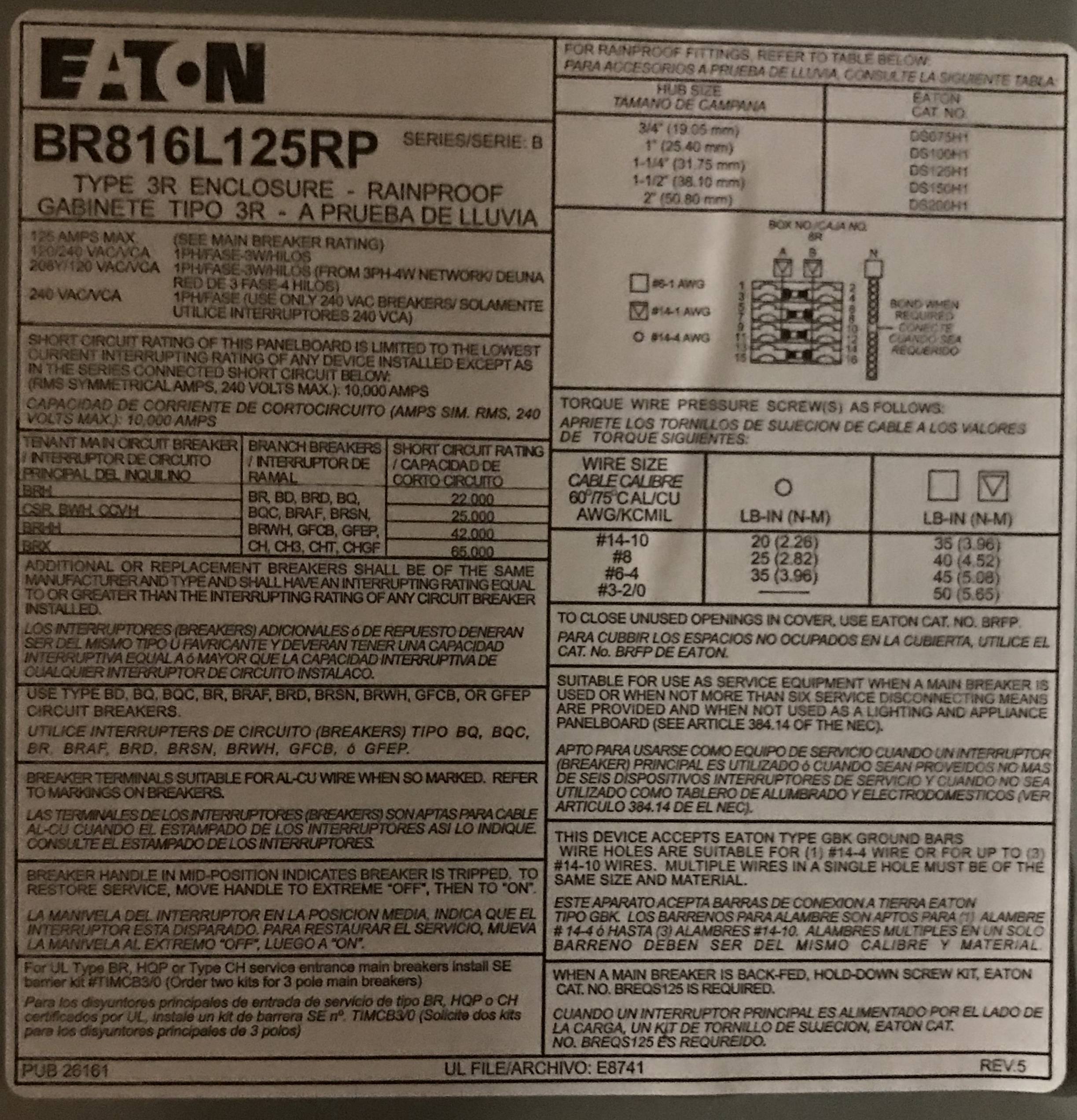 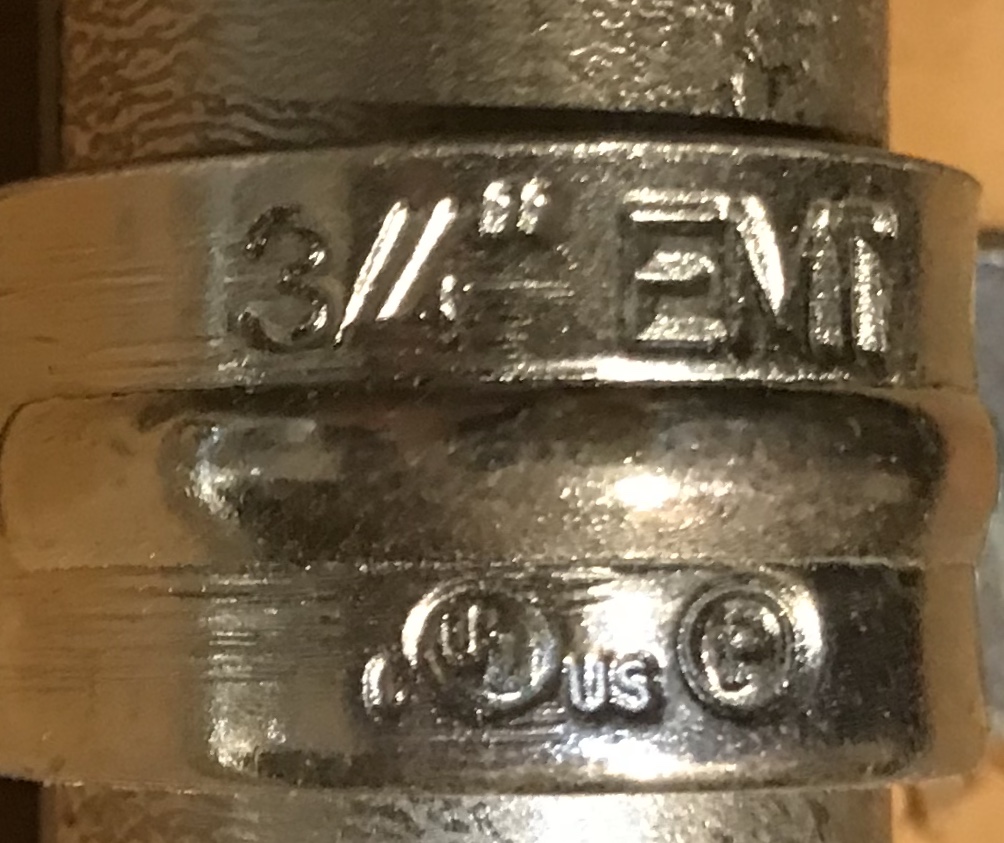 I would come out the right side instead of the bottom, and stick with a surface conduit run

Given your situation (a NEMA 3R box surface-mounted indoors), I would use a nipple and suitable conduit body (it'll be either an LL or an LR, as you want the cover to face out towards you) to come up into a conduit run along the wall surface, then use a prefab sweep to transition to the run across/along the ceiling joists, supporting within 3' of termination points and at 10' or shorter intervals otherwise (if you don't want to spend time figuring it out, it may be easier just to strap it down to every joist it crosses). This saves you the hassle of trying to get wires into the back of a surface-mounted box, as well as the need to use a junction box to transition between wiring methods.

Inside this, you'll want to use individual 12AWG stranded THHNs (2 hots and a neutral, forming a multi-wire branch circuit or MWBC with the metal conduit as the equipment grounding path) to the various outlets, with a GFTCB220 in the subpanel providing protection to it all, given that your subpanel appears to take type BR breakers, and is configured in a way that you can add breakers to it without causing issues with the Code rules surrounding your solar setup. Make sure to use a torque screwdriver to torque the breaker and busbar screws on the panel to spec, by the way! (It doesn't hurt to use it on receptacles, for that matter.)

P.S. if you're wondering why I called out wiring the setup as a MWBC instead of as two separate 120V branch circuits, using a MWBC here gives you the ability to get both 120 and 240V out of the circuit, which is helpful for running power tools or other such high-demand loads.

Sticking to the "running conduit" aspect...

Must be attached/supported within 3 feet of each termination. Must be supported/attached no less than 10 feet apart along run.

Given things that chew wires, I'd strongly suggest sticking to conduit the whole way. But if you want to you can have a juction box and change from wires in conduit to cable in the drywall. You CANNOT run wires that are not cable in drywall, and it's impractical to run cable in conduit. You CAN run conduit in drywall.

Not the answer you're looking for? Browse other questions tagged electrical wiring joists conduit or ask your own question.

2
Exposed Romex cable on garage ceiling without conduit protection
0
Can I run NM 12 ga circuits on a running board or MultiCable Staples across floor joists use in a basement with an unfinished ceiling?
2
Running conduit between basement and 1st floor
1
Running wires through conduit on outside of house to feed garage sub panel
4
Can I run two cables through the same conduit?
1
Code compliance - how do I pass EMT conduit through an interior wall?
0
Securing LFNC conduit to joists
3
Can PVC conduit be run through garage/house firewall?
0
Garage surface conduit feed an outdoor outlet