What causes burn marks on the air handler in the attic?

What caused these burn marks? 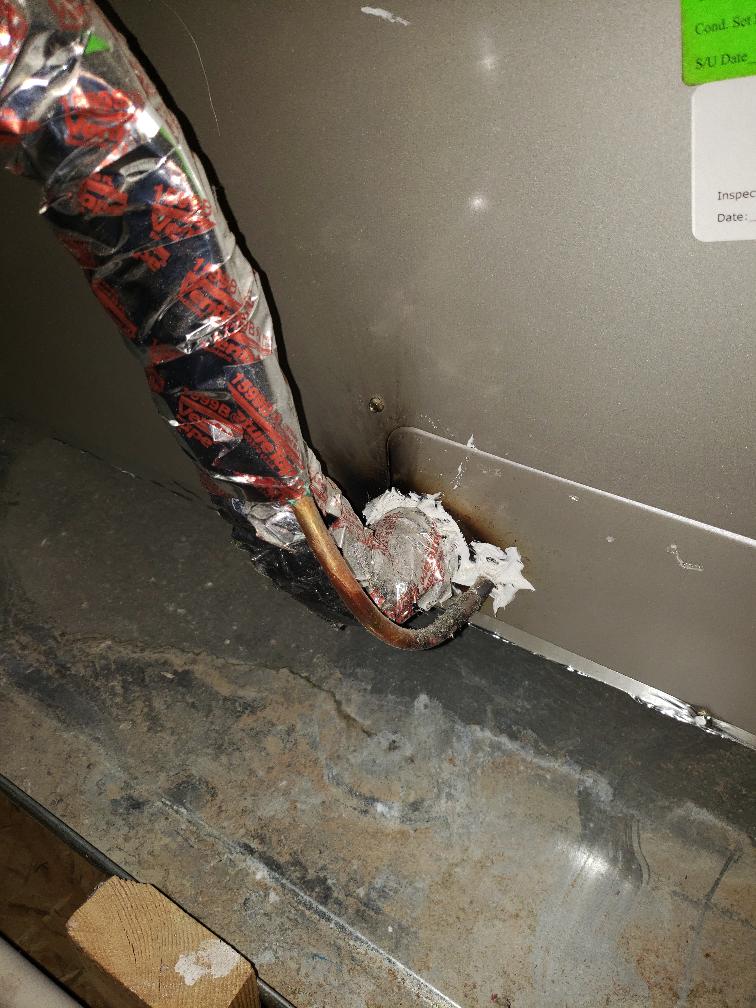 Phoenix Arizona suburb. House was construction complete about 6 months ago.

The tape and insulating foam around the bigger tube was cut. I assume the AC tech that came out to investigate the bad fish smell (see below) did the cutting, but I don't know for certain.

A couple weeks/months after moving in we would noticed a strong body odor / fish smell in one area of the house, but nowhere else. It was sporadic. Sometimes we could smell it every night for a few days and sometimes we wouldn't smell it for a week or two. When it was there it would smell that way for hours. We usually only smelled it after dark. I had a theory that it was moisture making mold a day or so after rain, but it wasn't consistent. I replaced the air filters. No change. Google said it could be burning plastic and to call a pro. I called the builder and they sent an AC tech to investigate. The AC tech said they found nothing. We did smell it after they investigated, but we haven't smelled it in weeks/months. Maybe the heater was kicking on and making the smell and it hasn't kicked on since spring, so that's why we don't smell it anymore? Except, I don't think it was cold enough to kick on the heater.

Occasionally we smelled a strong burning plastic smell. The odor was in the kitchen and every time we smelled it the gas stove was on, but we did not smell it every time the stove was on. I looked all around the stove and saw nothing abnormal. I couldn't pin the smell to the stove either. My wife thinks it was a specific pot. That pot never made the smell before we moved into this house and I was unable to replicate using that pot. We haven't smelled this odor in weeks/months.

The burn marks on the air conditioner air handler are from the torch the installer used to solder the copper pipes to the unit. The pipes then go the compressor located outside the unit.

Most installers can do this job without scorching the unit.

4
What could be causing an A/C blower motor to turn off randomly?
4
Why does the pilot light go out when the furnace is running?
1
How can I prevent the fireplace smell when the A/C is on?
2
Five Year Mystery - Unable to find source of burning smell from HVAC system
1
Why does my new furnace vibrate and smell like burnt oil?
0
What could cause a central A/C system to smell but only after central heating had been used?
0
Strange metallic/electrical smell coming from Samsung AHU