My apartment had an electric range which plugged into NEMA 10-30P/10-50P and was served by two 50A circuits. I will be installing electric/220V induction cooktop using the same circuits. 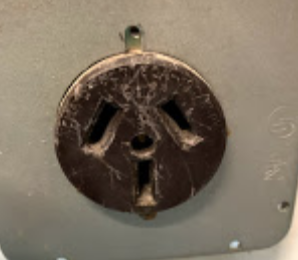 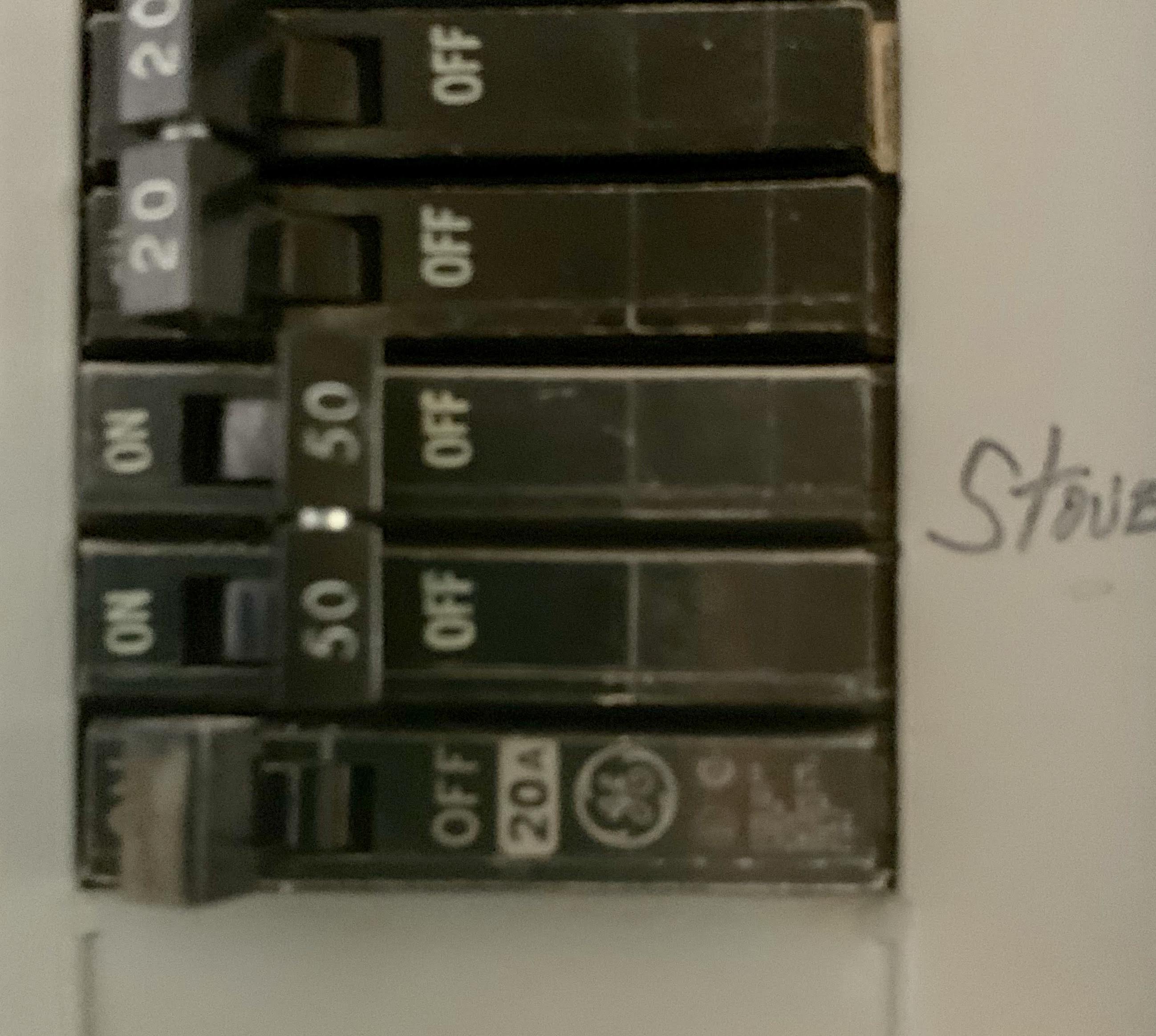 There are three wires in the plug (red, black and white). 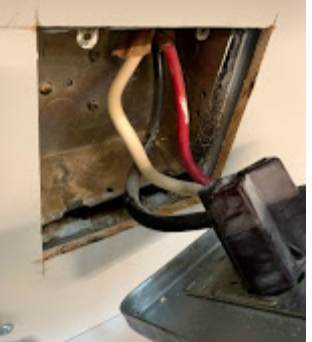 There are three wires in the new cooktop (red, black and green). 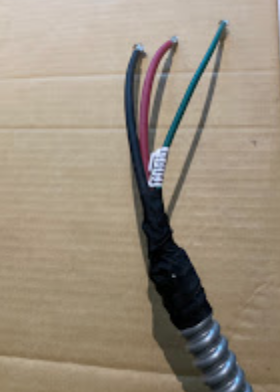 Is it possible instead to put a plug at the end of the cooktop 3-wire cable? If yes, then is there an advantage to doing that rather than hardwiring it?

I'm in NYC if that matters.

Here is my attempt at picture of the top of the J box behind the plug: 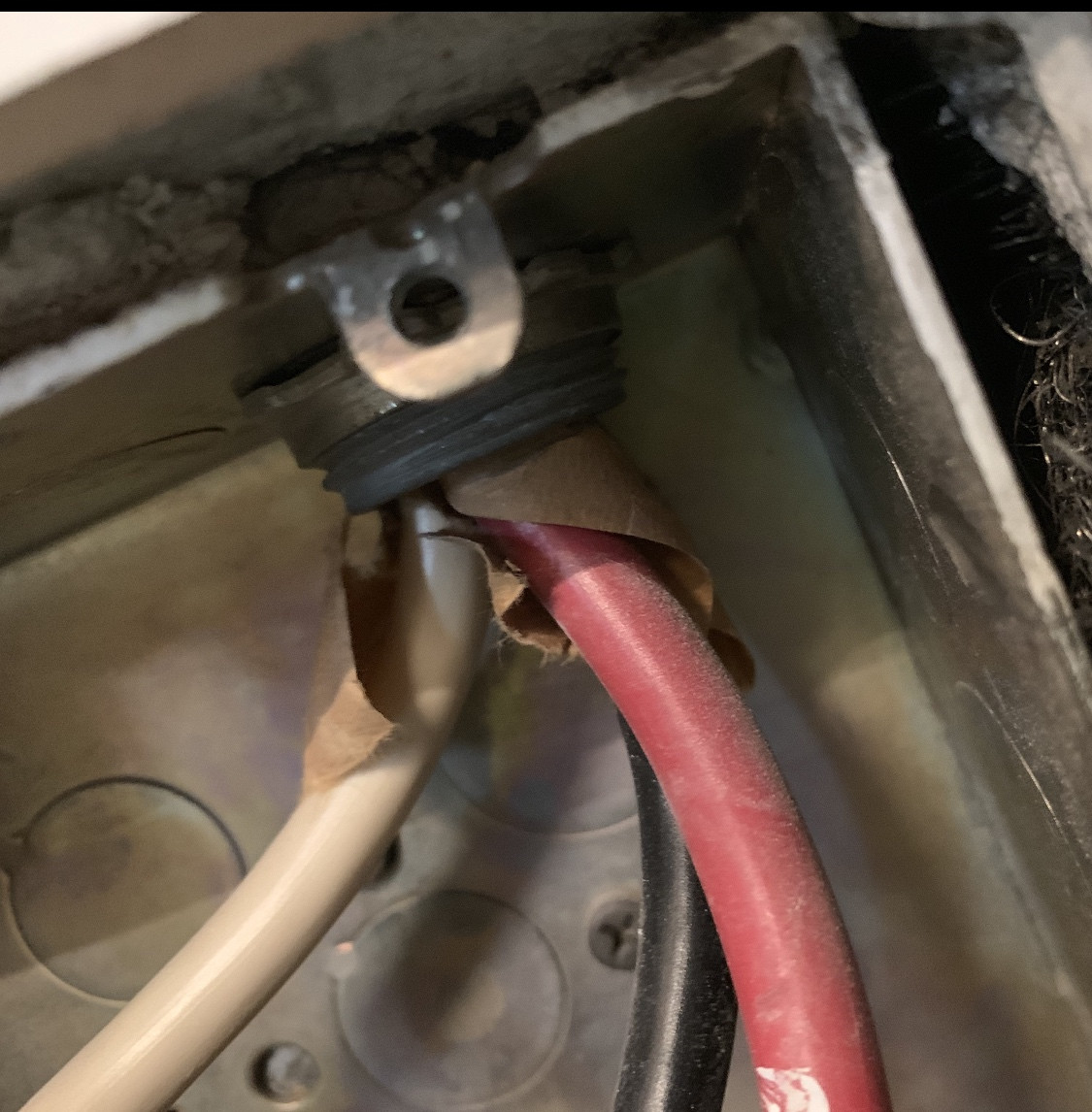 And here is the sub-panel showing the three wires in question: 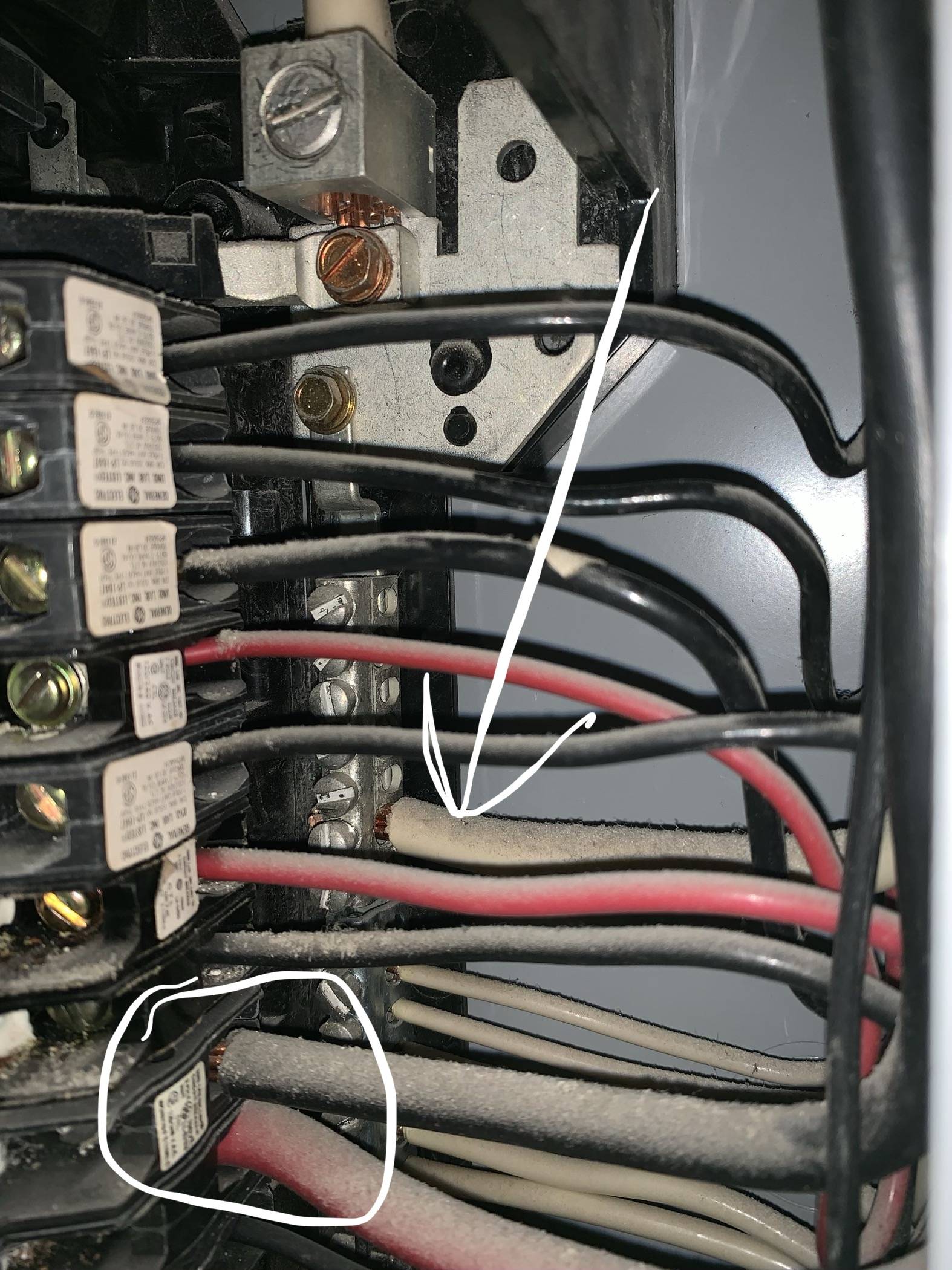 Through discussion, we've determined fairly conclusively that a) this complex's wiring is grounded, and b) the grounding is via conduit or AC cable jackets, NOT individually run ground wires. OP reports that his "sub?" Panel has no ground wires at all, yet grounds check out on receptacles, so that indicates boxes are grounded and ground wires are not run (except inside AC cable). That's not weird; I manage 11 buildings and all of them are that way. I don't even stock ground wire.

You need to make sure that the wires from the wall are #8 or larger. (The paper padding makes it AC cable, whose internal wires are THHN, allowing the 75C column to be used for 50A).

You need to connect the cooktop's green wire to the box*. The white wire in the box needs to be capped off.

However, there's a snag with hard-wiring. You can't just glorp the wires down "wherever". You need to have the wire-whip enter the box correctly, and that means through a knockout. That knockout needs to be on the face of the box, obviously, so you need a blank junction box cover that has a knockout on its face.

Easy enough, but you don't have a standard box. Your box presents the receptacle mounting screws for 2 abreast (e.g a 2-gang box) and lacks the corner screws that standard 4x4 box covers use.

So, you'll want to head to the best electrical supply in the city (goes without saying, that ain't a big-box store) and find the rare steel blank cover plate that attaches to the receptacle screws of a 2-gang. Ideally this will have a 1/2" or 3/4" trade size knockout on it, but if it doesn't, the shop may cheerfully punch it for you.

Make sure the cooktop allows this before you commit.

If you want to cord-and-plug connect this, you need to change the receptacle. That thing is an obsolete, dangerous NEMA 10-50, and must be changed for this application because you need ground and NEMA 10 doesn't have it.

Fit a NEMA 14-50 receptacle. This has 4 wires. Fit the white wire to the neutral pin even though this cooktop doesn't use it.

On the cooktop, you'll be replacing the entire whip with a cord, not putting a plug on the end of the whip (which isn't structurally equipped for that). Buy a 14-50 cord, and attach to the cooktop's terminal block. Neutral gets wrapped with tape, not tied to ground!

* The box has a hole in the back tapped #10-32, it's a bit smaller than the other holes. This takes a #10-32 screw, and they even sell green ground screws just for this. This needs a #10 solid pigtail, which is tied to your oven's green wire. DON'T just clump this together with the white wire "just in case", that would create redundant neutral-ground bonds, which can cause all sorts of trouble. Also do not use the pre-made ground pigtails sold at the store, as those will be #14 or #12 and you need #10. You can buy 1 foot of bare #10 wire cheap.

Yeah, that's BX/AC, so ground to the box

Looking at your closeup shot, I can tell that between the fact that the cable armor is stopped by the fitting (instead of a cable jacket, which will poke out into the box through the cable clamp as a general rule), the lack of a ground wire entering the box (which rules out type MC), and the individual paper wraps around the conductors seen protruding into the box (which is characteristic of AC/BX), this circuit, like the rest of your apartment, was wired using type AC (BX) cable, with the armor as the ground path.

You'll need to hardwire this, using a fitting and a faceplate

Since your cooktop comes with a flex whip and not a cord (or a place for a cord to go), you'll need to hardwire the flex whip to the box. You'll need a 1/2" flex/MC fitting (the straight vs. 45° vs 90° decision depends on what keeps the whip from trying to bend too tightly, although 90° would be a common choice here) and a 4 11/16" flat faceplate with a 1/2" KO in it for this. The green wire from the cooktop gets landed on a 10-32 ground screw in the back of the box, the hots from the cooktop connect to the corresponding hot wires in the box with appropriate wirenuts, and another wirenut is used to cap off the neutral wire from the wall by itself, as it's not used in this configuration. You'll need to attach the fitting and faceplate to the flex whip before you connect the flex whip to the circuit, by the way.

Ensure that you know which of the 3 wires are your neutral of your existing 50 amp outlet ... In your top picture, of the 3 slots you see, the one on the BOTTOM is where that white wire should be connected to NOW.. That wire will be the one that will connect to the Green one on your flexible metal connection coming out of your induction cooktop. The other two are exchangeable..

Your cooktop is 30 amps, and that 50 amp breaker in your panels needs to be reduced to a 30 amp/ 2,pole. No need to change the wire out, your good there.

At your range plug, if there's room for an extension box which would sit atop your existing wall box, you COULD wire your cooktop to that.

Not the answer you're looking for? Browse other questions tagged electrical kitchens 240v or ask your own question.

9
How do I wire a brand new cooktop that has no white neutral wire?
0
How do I wire a new range to old wiring?
3
Connecting the four terminals of a 14-50P to a homebrew 240v system with three wires
1
Can I use 6-2 NM W/G when running a new 50A branch circuit to my cooktop?
5
Installing a new electric cooktop details
1
Can I convert an old dual fuel Electric/Propane range into a cooktop only that uses 120V instead of 240V?
1
Old kitchen range only has 3-wires, how to wire correctly to 4 wire circuit
0
Replacing a wall outlet with three black and three white wires with a smart outlet with one white and one black wire
2
Replacing old Electric Radiator Thermostat (220v) with a 4-wire Honeywell CT410B (Non-Programable)
1
How to connect 3-wire appliance to 4-wire junction box