I'm re-planking my deck and shoring up some of the substructure while I'm in there. The beams are side-mounted to the posts like this (from dca 6): 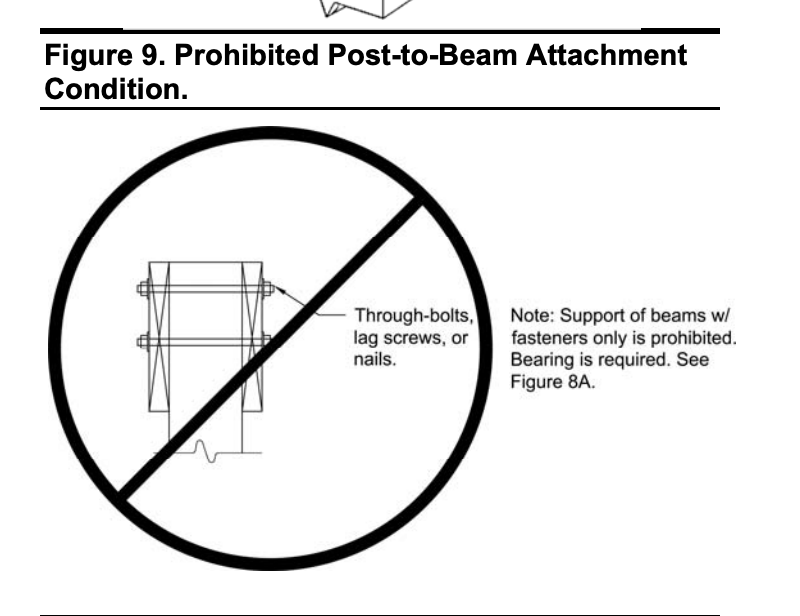 This is obviously non-ideal, but is impractical to replace. I'm spot-checking the existing lag bolts and am finding some surface rust (not bad after 30 years), so in an abundance of caution I'm going to replace them with new ones.

Galvanized is what appear to be recommended, with stainless steel being preferred if you have the budget. However, what about the Hillman Deck Plus lag line? The only information I can find on them is their own marketing material claiming they are 2x more corrosion resistant than galvanized. Is this legit? Or should I stick with Galvanized or stainless steel?

I don't know how they do their calculations about how long the coating lasts, but I have used some of their coated fasteners in the past and they are high quality. I would guess that the coating lasts at least as long as galvanized, so the idea that it lasts two times longer could maybe be accurate.

An added plus is that the coating is pretty smooth compared to galvanized, and less friction is a good thing when you're driving a bunch of them.

On the other hand, if you're replacing fasteners that have lasted 30 years...even new fasteners that last just as long start to get into the area of being somebody else's problem three decades from now.

It appears the the most likely point of failure is the wood, not the fasteners. Over time the wood beams can split and crack so the bolts/screws don't have much to hold on to. I'd also check out the posts and beams to make sure the wood is going to last as long as the new fasteners while you're in there. That may be the quickest failure.

I believe that's why the current codes specify that the beams have something to "sit" on instead of just being held on to the side of the posts with fasteners.

This video shows retrofit steel plate fasteners to strengthen the connections you have (at 3 min): connection of beam to post

Not the answer you're looking for? Browse other questions tagged deck screws decking galvanic-corrosion or ask your own question.

1
Driving screws back into weathered deck
1
Freestanding deck - should I use joist hangers or bugle screws to attach joists to the bearers?
0
Screws used for deck - how to replace?
5
How can i remove my rusted and stripped deck screws from my deck boards?
2
Washer in front or behind cabinet panel mounted with lag screws?
0
Lag screws can't enter lag shields
1
Deck screws undetectable and boards are rotting
0
Why don't my composite deck screws go in all the way? Why RT screws?
1
My 3 inch by 9 grade 316 stainless steel deck screws are breaking