My bathroom sink drain began leaking recently. The PVC connection that meets the ABS connection is the culprit. See picture with red arrow below.

After taking everything apart and cleaning the parts, I discovered the ABS threads look to be dented (see picture). I suspect the leak occurs because the tapered gasket cannot form a water tight seal where it meets this dent.

How do I fix this?

It looks like there may be a glue type residue on the ABS threads. I wonder if there was once glue of some kind that broke down over time and caused the leak now. I can't imagine why this connection would have sealed without some kind of other stop gap measure in place to account for the dent. 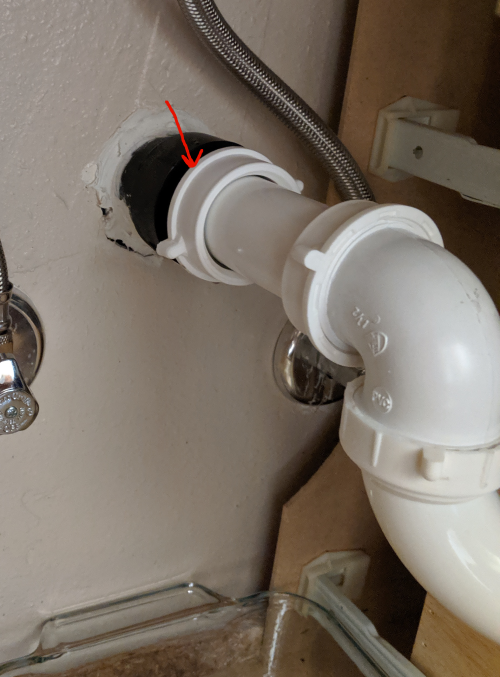 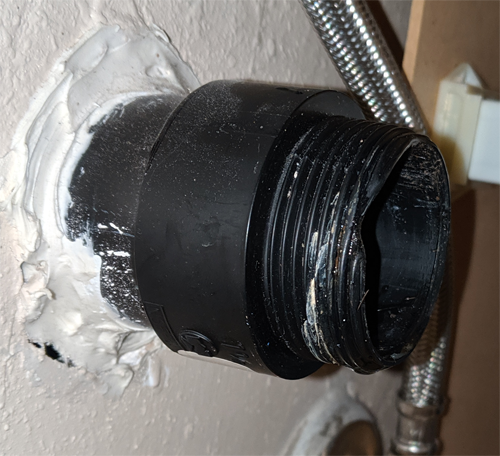 Try @JACK solution of cutting off bad threads. You might also try a different style slip-joint washer (they come in plastic or rubber). Tighten the fitting, hand tight is not enough. If that doesn't work, the fitting is toast. I would cut it off and glue a new one on, then use the proper slip-joint assembly with no glue, goop, caulk, goo, or any other such nonsense that is unlikely to work.

You have a couple problems though.

I would use, and have used, a sealer designed for plumbing systems that is designed not to harden and stays sticky - works a treat.

I think it is called plumber’s mait

But it sticks to your fingers as well... seal the joints with it and you don’t have to tighten the threads much. Think about how the joint works so you don’t apply too much ie work out where it is most effectively applied.

I'm guessing you're going to get a few opinions on this so I'll start out by saying what I'd try. I'd get one of those rotary tools with a cut off disk and start cutting right where the dent ends and cut all the way around the circumference of the fitting. You might be able to do it with a hack saw blade. Then I'd chamfer the inside edge with some emery paper or a round file until your tapered gasket fit in there. You might still have to add a little caulk between the fitting and the gasket depending on how well you smoothed out the fitting but at least your threads would still work.

Here are several ideas that came to mind.

(attempt to) Repair the threads

Heat will soften the black ABS so you could improve its shape, but it's probably not realistic to hope for sealing with this alone.

Roll a rope of putty with thickness similar to the gasket and wrap it around the PVC so that it contacts before the gasket. Maybe this will do the job, especially if you can at least partially re-shape the ABS so the dent/gap is smaller.

You're right, this is solvent welded to the pipe in the wall. It can be removed with abrasives such as a sanding drum on a rotary tool ("Dremel"). The plastic will wear away quickly with a coarse grit but it'll be tedious because of the difficult access. Depending on how the vanity is attached it may be worth the time to move the cabinet aside -- with good access that original fitting might be sanded away in under half an hour.

Not the answer you're looking for? Browse other questions tagged bathroom leak drain or ask your own question.

2
What should I do about mold until the leak feeding it gets fixed?
5
How do I seal my shower escutcheon plate to prevent it from leaking?
1
How to fix this leaky sink drain?
1
How to fix my leaking bathroom sink?
1
Leaky epoxied sink drain
0
Toilet tank leaking on the floor after removing and reinserting flush valve
2
Leaking bathroom sink?
0
P-Trap into Wall Marvel Connector Leaking
1
Leaking sink drain. Possible defective drain assembly?
2
Replaced Bathroom Sink Drain leaking