I was working on a house with a sub panel for a shed/workshop. The sub panel was fed off the house main panel via 2pole 50A breaker. The sub was a load center type with no main breaker. The neutral bus bar of this sub had both the neutral and the ground from the house tied into it. Likewise the circuits coming into the sub had the grounds tied to this neutral bar. My understanding was that the ground was only to tie to neutral at the main panel where the main panel ground came in. I understood this was to avoid a lower potential ground path through something or someone shorting the circuit and getting fried.

Should I put another bar in the panel to separate the ground wires from the neutrals?

Per PhilippNagel's comment yes, but when feeding to another building some of the rules change. Note the attached: 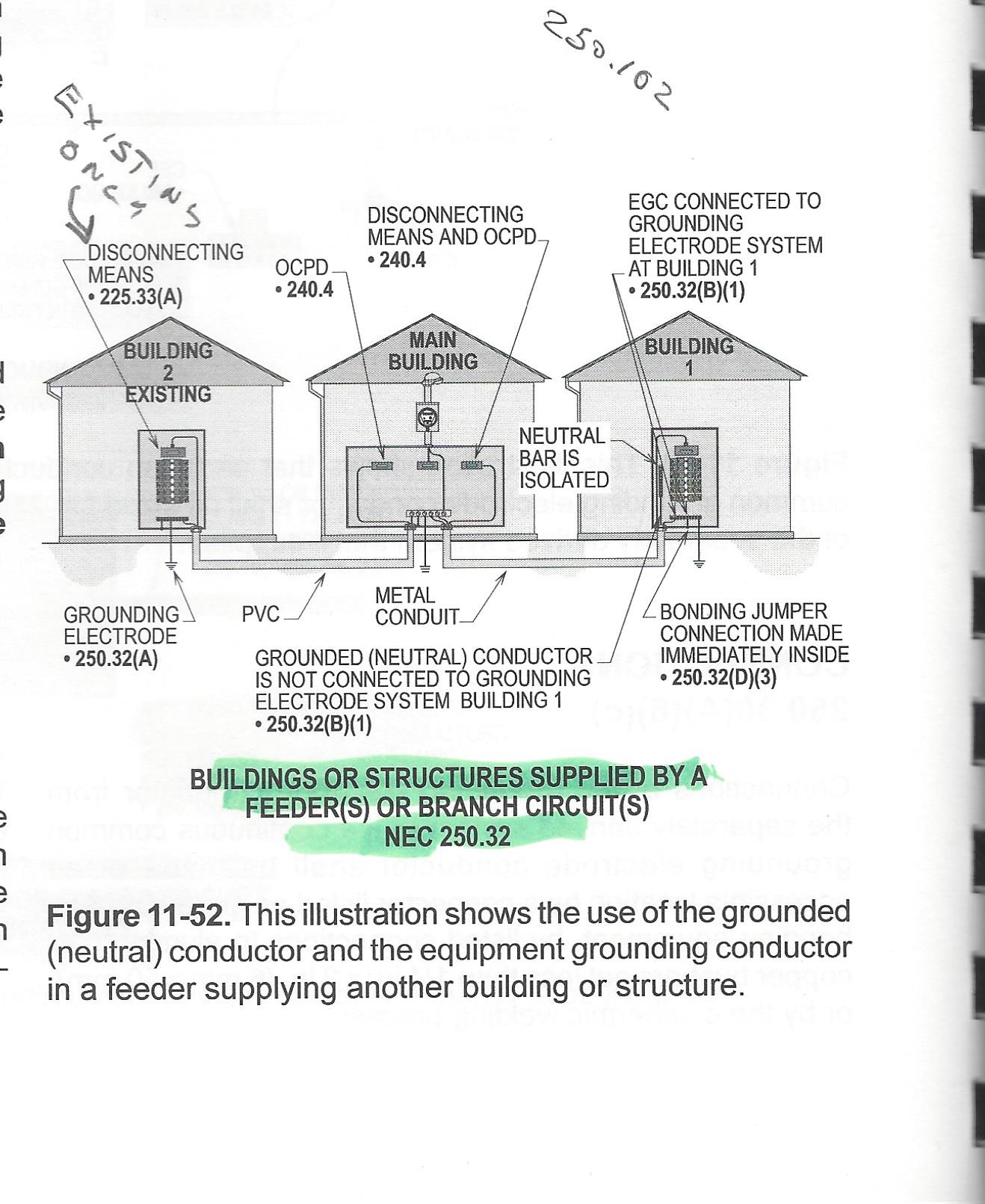 Since you say you have an EGC (ground wire) run from your main building to your sub panel you would be following the rule to Building 2. You need to install a separate ground bus and bond it..

Absolutely correct. There can be only one --

connection between neutral and ground in the entire system. If that isn't true, it can cause all manner of mayhem.

You're thinking of grandfathered

Grandfathering applies when it was installed a long time ago, it was Code at the time, and that was as good as it could've been done.

In your case, the subpanel's feed cable used /3+ground cable, which is modern and correct. Failing to separate the neutral and ground, when they were able to, doesn't qualify for grandfathering since it's trivially easy to fix.

So it should be fixed. I would say "acquire a ground bar for that panel" but the panel probably needs to be replaced also.

If the shed is detached (breezeways count as "attached"), this subpanel needs a main disconnect switch. The most economical way to do that is get a panel with a main breaker. It's OK for the main breaker to be larger than the supply breaker. So for instance a 225A subpanel is just fine.

Also, it's uncomfortably small in terms of number of spaces. I don't know that, it's just the way to bet :) Plan to have plenty of spaces left over without resorting to double-stuff breakers such as duplex and quads.

Not the answer you're looking for? Browse other questions tagged grounding subpanel neutral or ask your own question.

2
Can I extend the ground/bus bar in a main service to accomodate subpanel equipment ground?
2
Sub panel and neutral and ground bus bar
2
Is #10 AWG sufficient to ground a sub-panel to the ground bar in the main panel?
1
Where on the main panel do I put the ground wire for the sub panel?
2
Main service electric panel has no neutral wire - both neutral and ground wires on same bar - sub panel question
0
Is this neutral-ground bus bar configuration correct?
2
Bonding vs grounding a main and sub panel
1
Sub-panel ground and neutral connected to main ground and neutral bar?
0
Is this sub panel properly / safely grounded?