Why aren’t there water shutoff valves for each room?

Had an issue today with a nail going through a water supply line in a bathroom. It got me wondering if there is a practical or technical reason there aren’t typically room-specific shut offs between the master shut off and the shut offs at the fixtures? Seems silly to shut down the whole house for a pinhole, but there really wasn’t a better option.

Just asking out of curiosity to see if there are any plumbers out there.

This is a result of building as efficiently (cheaply) as possible, and there is almost no need for room valves.

Second, there is little need to install valves in advance:

In summary, the expense of the extra valves, pipe and labor are not worth it, especially from the perspective of a builder, where a small reduction in cost per home built results in a large savings overall.

The Viega Manabloc is an example of a system in which a central valve manifold uses a dedicated tube for every fixture in the house, as alluded in the comment from BillDOe. 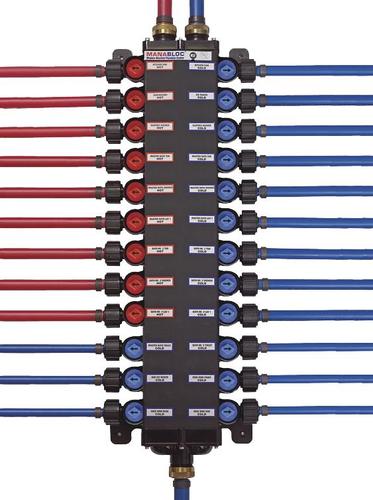 In some US homes it's not a difficult retrofit to split the house into at least two zones. Typically the water service enters an unfinished "utility closet" space where the water heater is also located. There will be a few tees and water pipes head off in different directions to the master bathroom, kitchen, other bathrooms, etc. These pipes could be cut and valves inserted so that water can be shut off somewhat selectively.

In my own house I reconfigured the plumbing in the utility room. I have the kitchen and basement bathroom on one pair of valves (one each for hot and cold) and the laundry and other bathrooms on a different pair. These are arranged neatly beside the water heater. This has allowed me to defer replacing the shutoff under every sink and toilet, which always seem to be jammed and/or corroded to the point that they can't be shut off when it's needed most.

It's not as fine-grained as the manifold approach, but routine plumbing repairs are far less stressful when at least one toilet in the house remains functional!

Now, to actually answer your question. It cost less than US$100 in parts and several hours of work to make that change in my house. Doing the work that way during original construction would cost almost as much. It doesn't happen because the home buyer doesn't want to pay extra for it, the builder doesn't want to pay for it from his own pocket, and the plumber isn't going to do this premium/extra work for free.

It would be difficult to install area shutoffs in most residences, since they need to be accessible to be useful. The best case scenario is an access panel in the floor or wall, the worst case is outside the room in an adjoining room or closet.

Even more damning is the fact that they would, by definition, be in non-standard locations. I pity the poor plumber who's faced with a closed shutoff someplace between the main and fixture shutoff. If it's a newly purchased home, or the knowledgeable person isn't home during the service call you'd never find it.

There are - just not usually in houses

Commercial, industrial and multi-residential buildings almost always have isolation valves for floor or unit take-offs and for each "group" of fixtures. What constitutes a "group" depends on the layout of the building. Basically its a design balancing act between the how large an area has to be shut down for repairs or modifications versus the additional cost in valves, access panels and additional pipework.

Repairs and maintenance requiring water isolation in a house are relatively rare and only inconveniences one owner so these additional valves are not usually justifiable.

In France it's commonplace. Not only having small shut-off valves for hot and cold, but also to toilet, washer, dishwasher shower and water heater feeds.

There's also manifolds near the rising main and off electric boilers, which isolate each separate feed. Possibly over the top, and meaning more potential leaks, but nevertheless useful on occasions.

It's probably linked with their thinking on electric circuits, where each room has an individual fuse/circuit breaker, unlike U.K., where ring mains are the usual situation.

This really depends on the style of home and the floorplan. For example:

All of this talk of multiple valves and water lines is really just a distraction from the actual problem here: you drove a nail through a water line. Whether you have 1 set of lines or 5 sets of lines, you are still spending time and money to cut open a wall, repair a water line, and do all the necessary clean up. In areas with open space, the lines should be hanging somewhat loose so if a nail comes through it will push the lines aside rather than puncture them. In spots where the lines cannot deflect. such as when passing through a wall stud, there should be a metal blocking plate to protect the lines. With proper installation, the chances of damaging one with a nail should be very small.

Here in the UK you commonly find a stopcock in the kitchen for the cold supply to everything except the sink, in the cupboard under the sink (Sometimes the hot as well, but most appliances are cold fill only these days).

I imagine this is because if an appliance like a washing machine or dishwasher is leaking slightly, it's not immediately obvious which appliance. Also getting at its service valve usually means pulling the appliance out from under the work-top and then crawling behind it, which may be beyond the strength or agility of some householders. It gives you the option to easily turn off the appliances without ending up with an uninhabitable house with no water at all.

It was a god-send when my downstairs neighbour told me he had water tricking through his ceiling. It wasn't a faulty appliance. Turned out a rodent had got under the floor and had chewed through the water pipe to the appliances. Had to dismantle half the kitchen to fix it, but fortunately I still had a kitchen sink and bathroom while that was sorted out. BTW always check whether your insurer excludes rodents chewing through pipes or wires before it happens -- it's expensive if they do.

Tradition is not to do it ; It is difficult to get contractors or plumbers to change. When I drew up my house plans I put a valve at each water use point ( You don't need each room). Although I was there most of the construction I missed that the plumbers did not put in shut off valves for either tub/ shower . I need them now , it is very inconvenient to shut off the whole house. My required shut off at inlet AND outlet of hot water heaters has been useful. Likewise , the framers want 24" doors on bathrooms ; I supervised one and got the 36" door shown on the drawing. I missed the second one and had to take out the framers 24" and put in a 28" rough opening after the framers left.

Not the answer you're looking for? Browse other questions tagged plumbing shutoff or ask your own question.