I am installing a combo shower fan/light over a walk-in shower; it is meant to be installed in the typical fashion (for recessed fixtures) of two adjustable-length brackets meant to span the gap between two ceiling joists.

Unfortunately, as you can see from this image, access is very poor indeed. By way of scale, the opening into the above-shower space is only 7" high. It will be impossible to improve access. I had to cut away some sheetrock (on the wall that separates shower from remainder of bathroom) in order to even get here. 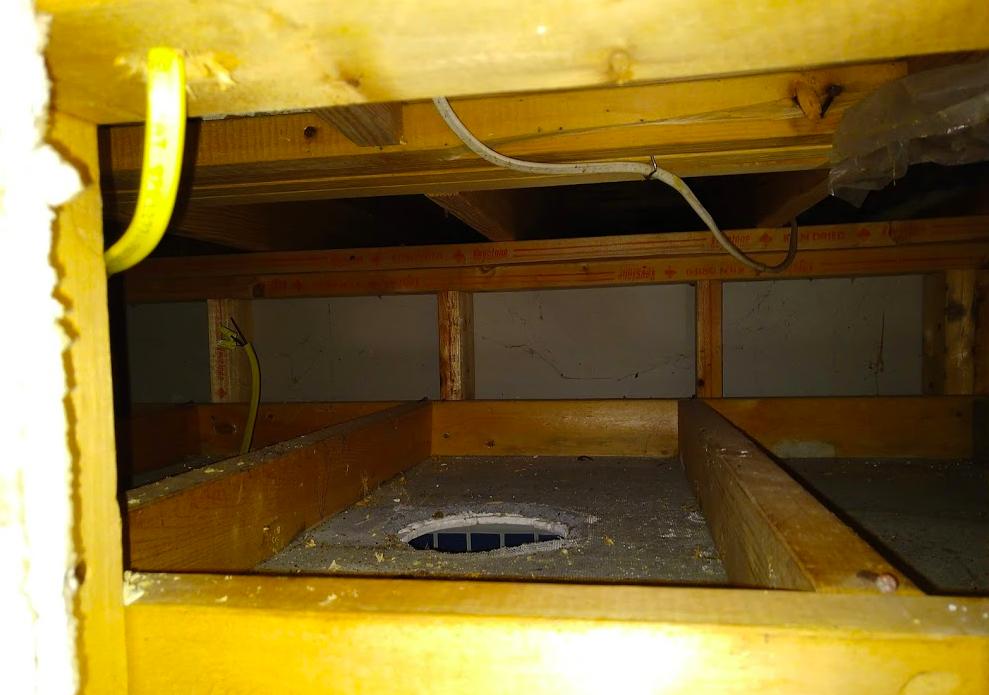 I can probably manage to fasten the bracket that runs along the near side of the fan, but for the one on the far side, I think it'll be impossible to fasten the left-hand end, perhaps the right-hand end as well.

So I'm considering alternative mounting options, and seek opinions on these, as well as suggestions of other approaches.

I could simply use a bunch of RTV silicon to glue it to the top of the backing board. Since the ceiling of the shower is a bit stronger than drywall - 1/2" backing board on 16" joists, plus 1/4"-thick ceramic tile - I'm thinking it can support the unit. The unit weighs 7-1/2lb.

Maybe I could somehow fasten the far-side bracket higher up on the side of the fan. Then it'd be relatively easy to fasten that bracket to the top of the 2x4 joists, since I also have VERY awkward access from above. I can't do this with the near-side bracket, since the 4" outlet is in the way, but it shouldn't be too hard to attach to the joists as intended. I hate to screw stuff into the side of the fan box, but I don't see how else, and I can actually access the inside of the unit there and nothing is in the way, so it actually feels pretty safe.

P.S. The unit is rated for "wet" locations, if protected by GFCI (which I will of course do). And I will vent it properly to the out-of-doors, using the limited access from above.

You're between a sheetrock and a hard place (sorry). I can't count how many times I've seen this done and done it myself. The weight won't be a problem assuming the sheetrock was fastened properly to the joists. I really don't know another way to do it unless you have a six year old that can fit in there. What are your plans for venting this to the outside? Do not just vent it into the attic. Good luck.

Not the answer you're looking for? Browse other questions tagged electrical tile exhaust-fan fans or ask your own question.

2
Is it legal to wire a bath fan using load from top of GFI outlet?
0
Bathroom light/exhaust fan fixture wiring
0
Exhaust Fan tripping GFCI
1
Can a light circuit be split out of the ceiling fan?
1
Ceiling fan mounting, old home, worried I did it wrong
3
Does a GFCI-protected bath light/fan unit need separate neutrals?
1
Moving bathroom fan on GFCI outlet
1
Installing a ceiling fan onto an old pancake box