We have built a floating deck attached to the rear of a brick house with a below-grade basement. Now, we have some rear basement well windows that the deck framing is built around. In order to still have some natural daylight come through the windows, we are looking to place some glass panels on the floor of the deck, above the well windows. 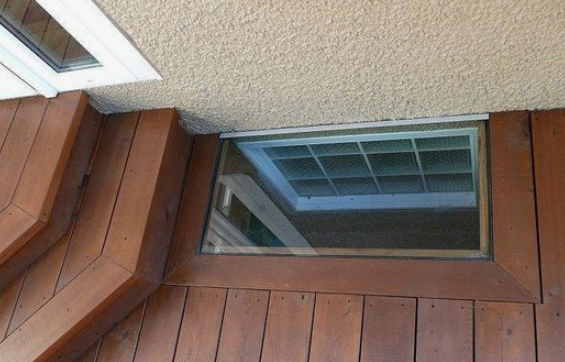 You can get angle iron at your local home improvement store. You would probably want to get some strip foam for padding. This can be as simple as strip closed cell foam for weather stripping around door frames, or it can be more of a rubberized material for better wear and less likely to compress. This can also be weather stripping for doors.

I'd go with at least 1" steel angle, which will deflect much less than 1/2". If you really want support, go for 1-1/2" steel angle or 1" steel square tube. The larger angle might not be as readily available, but the square tube can probably still be sourced at home improvement stores. I know Lowe's, Menards, Ace Hardware, and Home Depot generally carry the 1" angle and the 1" square tube.

It's mild steel, so paint it or it's likely to rust. Even though it's "mild" steel, it should still provide plenty of support for the glass. Seeing as the glass shouldn't deflect at less than 600 lbs. anyway, this is more for looks and your own piece of mind, rather than structure.

Also, I'd support it from the deck, not the house. Even though the deck is attached, there can still be some movement between the two. You don't want the glass panel to become a tripping hazard when/if the deck sinks even 1/4". I'd also use lag bolts. In my experience nails have a tendency to work their way out. Deck screws might be enough, but they also might not be. With lag bolts, one on each end should be more than enough and aren't likely to ever come out.

Not the answer you're looking for? Browse other questions tagged deck glass or ask your own question.

1
Can I turn a 4 X 4 deck post, eight feet high, into a 6 x 6 post by laminating a 2 X 6 and 2 X 4 to it?
4
Will my wood platform support my generator?
7
What is a good strategy to support this deck?
1
Attaching a deck ledger to the concrete pad of a detached garage
4
Glass table supporting 12 gallon aquarium
6
How can I determine if a mirror is tempered glass or not?
0
Can I build deck on top of patio?
1
2018 IBC code requirement for tempered glass windows (safety glass)