What architectural roofing feature is this?

First off, let me say that this question will stray from the residential side of home improvement, but I'm wondering if there's anyone who may be familiar with the following architectural feature at the storefront-side of this commercial building's roof?

I'm considering re-roofing the building but am curious about the function and even the name of this big stucco-block thing just hanging off the front of the roof. Can it be easily removed or is it part of the architecture? 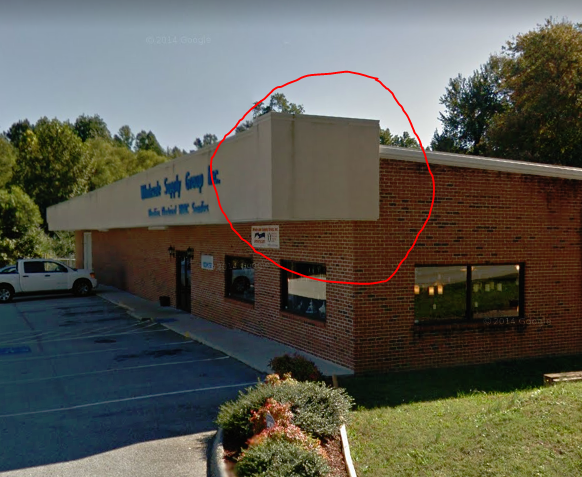 The building feature that you have indicated in your picture is designed in this case to provide an overhang over the front sidewalk. In this case the overhang provides cover during rainy conditions for persons coming to and leaving the business. Similar style overhangs such as this are also used for:

In cases where an overhang like this is built up quite a bit higher than the original roof then it may be tied into framing that attaches into the original roof and cantilevers over the edge. This can make for a much more complex job in re-roofing the building.

As far as removal it will depend on a number of factors some of which include:

Not the answer you're looking for? Browse other questions tagged roof architecture or ask your own question.

16
What are the pros and cons of installing a roof heating cable?
1
Why am I having an attic ventilation problem this year when I didn't last year?
1
Low Sloped Asphalt Shingle Roof Remediation
4
How do I correctly install metal roofing over a workshop with a vaulted/exposed ceiling
0
Will Interlock aluminum tile prevent ice damming on a roof?
2
What is the name of the architectural feature of a thin strip of roof on side wall connecting gabel end points?
9
What is this fence-like feature on colonial roofs?
0
Planning a new roof for future roof mounted equmpment
0
Filling depression in a Flat Roof with Sand and Roofing Rubber?