I had initially hoped to match the old/new board widths exactly and feather in some of the new pieces in to reduce the visual impact of the join, but this is proving to be difficult as although the boards are the same width, the original installers in the 1960's were very inconsistent with their cramping and there are (sometimes quite large) inconsistent gaps moving the ends of the boards out of alignment fairly quickly.

I thinking about routing out a 30m or 40mm wide channel about 6mm deep cross-wise along the join (ie, evenly across the ends of the old/new lengths) and dropping in a piece of contrasting wood to accentuate the join rather than hide it.

This obviously raises concerns about expansion.

Is this likely to be a problem?

(To be clear, I was going to use new matai for the cross piece insert and I'm not at all concerned about the difference in wood color between the new and old matai - after sanding/finishing and a decade of aging I imagine they will look fairly similar. I'm just not a huge fan of the straight-line room-wide butt join running the full width of the room - functionally it's fine, but looks a bit a naff. By putting the cross piece in I'm thinking about making it look more like a feature/ slightly more intentional rather than the constraint that it is)

I've been thinking about this since yesterday. There are all kinds of transition pieces for floors that allow for expansion but they all have a slight overlap and thus are raised from the floor, like the one I've shown below. 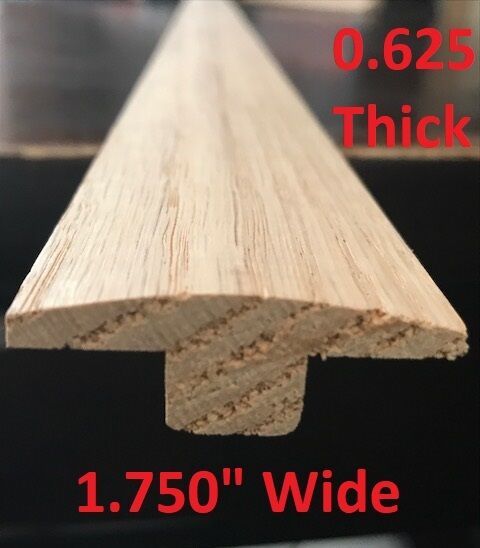 If this is in the middle of a room it stands out like a sore thumb. I'm guessing you want a transition that's flush so if I was doing it, I'd route out the space like you said you wanted to do. I'd fit in a flush transition piece and deal with any expansion later if it should happen.

To long for a comment. I have used router bits & shapers to make both the tongue & grooves in larger boards that we cut down to match the width on Victorian homes. Even with a complete refinish a pro can see the difference because the grain is not as tight maybe only 50% of the original but most folks don’t see it if they do they don’t realize what they are seeing. Just prior to my dads passing we purchased a late 1800’s home that had to be moved or taken down, we gutted most of the flooring and the fixtures , doors And siding before our 2 weeks was up and we knocked it down, we did do a couple more remodels and because we were able to use original wood you could not tell. Mom sold all the “junk” for ~20k to another contractor most was from that 1 home,

I did a couple more several years later and wanted to have the pro look but could not find anything close. What I did was to remove a section in a bedroom to use in the Parlor and dining room these are the main areas of focus for the historic register, yes the doors, windows and crown moldings are examined but the parlor and dining room were areas inside they really examined so you may be able to match your area by using wood from another room that is a lot of work but if in the open it is the only way I know to be judged original when repairs and or remodeling.

Your needs are not that much different than ours were, we did not have issues with using original wood but did have some cupping prior to using new wood because of the grain differences only once that I remember having to go back and repair but that was caused by a dishwasher overflowing.

If you have a closet or pantry, etc. you might be able to "harvest" some floorboards from inside there to get a more perfect match to patch the hole.

It would be the "original" wood, so most likely it would fit the dimensions and coloring better and have been subjected to roughly the same moisture effects and movements, etc. as the rest of the floor.

You could then patch the hole in the closet/pantry or whatever with new wood where nobody will see it.

I'd try something like that before routing out pieces of floor and filling with transition molding, etc.

Not the answer you're looking for? Browse other questions tagged wood hardwood-floor tongue-and-groove or ask your own question.

4
Routing grooves in engineered hardwood flooring
2
What tools should I use to remove the tongue and groove from floorboards?
2
How to join hardwood rows from two rooms at doorway?
1
What kind of board is this, and where can I get some?
1
Replacing a few boards in a hardwood floor: sanding and refinishing?
0
Is our flooring contractor extending our hardwood floor correctly?
1
Floorboards have come loose