A fluorescent light fixture in my house looks like the attached picture when I turn it on. I replaced the light tube, but no success. If I repeatedly turn it off and then on quickly, it eventually lights up properly. Does this mean that I need to replace the starter? If not, what else might be the issue? 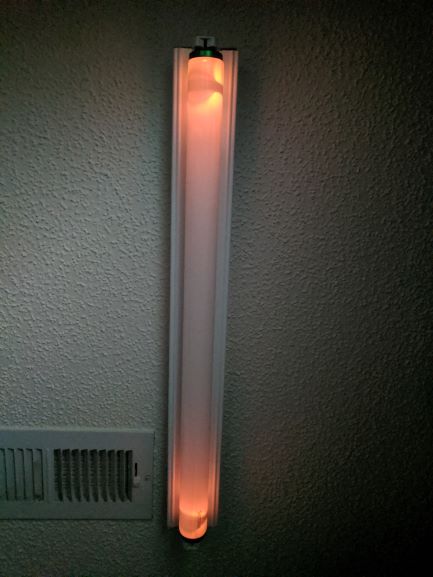 Yes, the fixture is stuck in start mode. It's preheating both ends, but it's not striking.

If it has a starter, replace it. However, if it doesn't, or if the starter doesn't fix it, it's the ballast (the bulky part which limits the current passing through the fluorescent bulb).

If you're at the point of replacing the ballast, the replacement ballast might be wired differently - keep close eye on the diagram. Also, the new ballast would almost assuredly not use a starter.

Another option, instead of replacing starter or ballast, is to rewire for a direct-wire LED "tube". Don't use a plug-and-play LED because that depends on the ballast/starter working, and yours doesn't.

I haven’t seen a starter for a while, I would change over to a led tube, direct wire or hybrid is the best in my opinion. A friend called me for help last month he purchased plug and play lamps (same problem that you have) but the ballast was bad so his new lamps would not work, I took over some direct wire led lamps removed / bypassed the ballast in a couple of minutes and he had light. If the ballast would have been good a plug and play or a hybrid would have worked but with a bad ballast you need a direct wire or hybrid.

Not the answer you're looking for? Browse other questions tagged fluorescent or ask your own question.