How do I trade the lights that these two light switches control with each other?

I have two light switches in my bathroom. I'd like to swap the lights that they operate with each other.

I have no experience with this kind of thing, but I'm hoping the proximity of the two switches makes it simpler. 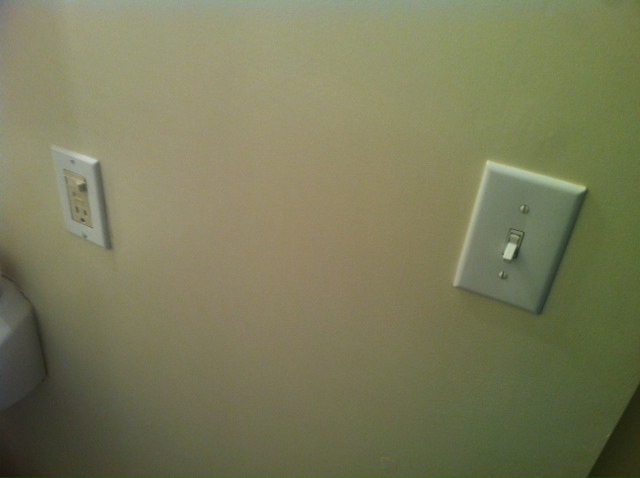 Your honest statement, "I have no experience with this kind of thing," is both refreshing and cautionary. Electricity can be dangerous. Most of us who dabble in it have learned a good bit by watching those who are much more experienced. When in doubt, call a pro (or at least a well-seasoned amateur). What follows is not a recommendation for you to proceed. Think about getting more experienced help.

The switches can be switched. How difficult it is depends on how they are presently wired.

The switch on the left, Switch A, has a full circuit in the box, that is, a hot, neutral and ground, which powers the outlet. Switch A above it is probably on the same line and works by interrupting the hot current to the light it controls, Light One. The neutral and ground that feed the outlet are probably tied in to the controlled light. The question is, where does the switch on the right, Switch B, and the light it controls, Light Two, get their power?

If Light Two gets its power (hot and neutral) directly from the box that contains Switch A, and the line to Switch B is just a two wire hot line that Switch B either connects or disconnects to Light Two (back through the box containing Switch A), then the lines in Switch A's box that control both lights can be swapped to reverse the switches.

If Light Two draws its power directly from the box on the right (rather than through the Switch A box), you cannot reverse the controls without running a new line. The most likely solution is to open a channel in the wall between the two boxes and run a new line to Switch B. Then Switches A and B can be reassigned. The channel can then be patched with drywall tape and compound.

Exactly how to swap the wires is a bit complex, and if you do not already know how to do this, you really should have help.

If you cant pull down the wall its probably not going to be a friendly task. there is likely to be 2-4 studs between those 2 switches that you would have to drill through to swap wires. If you can get in to the celing or floor depending on where the wires were run you may be able to do it that way.

step 1 is to find how the wire runs from the switch to the light. if that light is under another level of the house its not going to be fun as it means tearing up the wall and running the wires that way. if you can get in to a crawl space or attic to get to the wires as they run from the light you can put a new section of wire on the switch end and pull it in to place as you pull up the old wire.

I have not covered the saftey, sizing etc this is just an overview of what would need to be done. most of that would require seeing the actual spot and having an idea of the code restrictions for your area.

1
How do I convert a 3-way circuit with two lights into two 3-way circuits that control each light separately?
1
How to wire three-way switches to light fixture with a fan?
0
How do I separate two 3-way switches to control lights separately?
0
Two switches, two lights, one light always on.
0
How to swap side by side light switches
1
How can I control two lights together at one switch location and independently at two other locations?
0
Installing 3 Eve Light Switches - one works, but two others just flash the lights every 6 seconds
0
converting two lights from two switches to two lights from one switch