What load panel should I use?

About 25 years ago I built a solid log cabin with 200amp service. The load center is on an interior wall (and hard to get at) and there is a 200amp disconnect just below the meter outside (so the load center is really a subpanel).

Then I had this epiphany; why not convert my disconnect to a 200amp primary panel then run both my main 200amp load center and the 100amp subpanel off of what was previously a disconnect? Then I though even more, why not just install the the solar breakers in this new, primary panel and forget adding a new subpanel just for the solar. I discussed this in general with the power company inspector who thought that was fine. So I ordered a Homeline 200amp panel and a 200amp Branch Breaker to supply my main load center.

Subsequently, I have talked with an electrician who has suggested a feed-through panel. I think his concern was that if the house was drawing 200amp (unlikely but theoretically possible) and the solar system putting out amps, that would exceed the breaker capacity? I'm just not sure I understand the concern.

I already have the new panel and 200amp Branch Breaker; I know a feed-through panel would be cheaper (and probably a little easier to wire) but I already have my head wrapped around what I have. 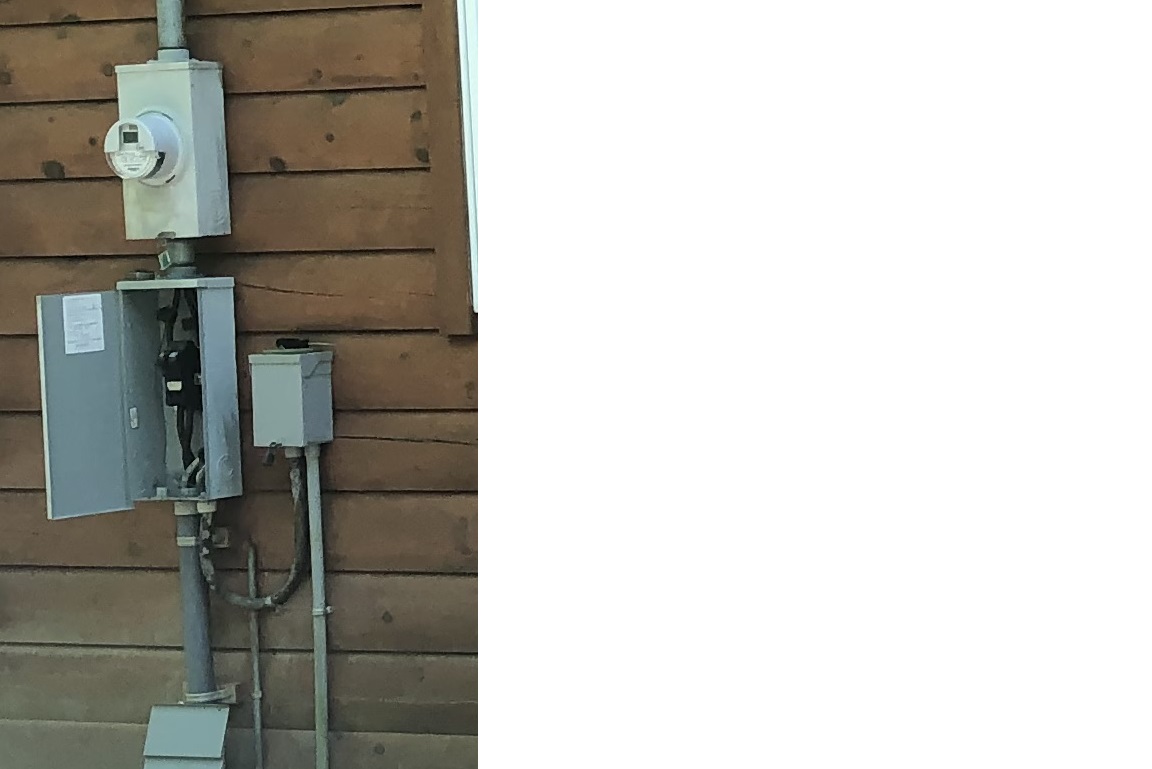 Talk to your inspector (AHJ), but I suspect you have too much solar for your panel's bussing

Normally, all the current in a panel is sourced from a single point, and thus the panel busbars are protected by a single OCPD (main breaker or upstream feeder breaker), meaning that the panel's busbars cannot be overloaded without eventually tripping the OCPD. However, when you start adding interconnected power sources, such as solar inverters, to the picture, this assumption stops holding, and it's quite possible to severely overload a panel's busbars without tripping any breakers if you start tacking inverters onto your panel without considering its busbar ampacity ratings.

This is enshrined in the NEC in the requirements in 705.12(B)(2), and more specifically in 705.12(B)(2) point (3), with subpoints (a) and (b) potentially applicable here, as subpoint (c) would effectively limit you to 0A of solar due to the presence of other loads in the panel along with the 200A feeder breaker, and subpoints (d) and (e) do not apply to your equipment at all:

(3) Busbars. One of the methods that follows shall be used to determine the ratings of busbars in panelboards.

(a) The sum of 125 percent of the power source(s) output circuit current and the rating of the overcurrent device protecting the busbar shall not exceed the ampacity of the busbar.

Informational Note: This general rule assumes no limitation in the number of the loads or sources applied to busbars or their locations.

(b) Where two sources, one a primary power source and the other another power source, are located at opposite ends of a busbar that contains loads, the sum of 125 percent of the power source(s) output circuit current and the rating of the overcurrent device protecting the busbar shall not exceed 120 percent of the ampacity of the busbar. The busbar shall be sized for the loads connected in accordance with Article 220. A permanent warning label shall be applied to the distribution equipment adjacent to the back-fed breaker from the power source that displays the following or equivalent wording:

However, given that you have multiple strings of microinverters and no AC combiner subpanel in your plans, the "Where two sources..." condition in subpoint (b) may not apply to your scenario, leaving you operating under subpoint (a)'s rules, which for your panel (which likely has 225A busbars, as per this Square-D drawing), limit you to a maximum of 20A of actual solar current, or 4.8kW of solar; in other words, with the panel you have and assuming subpoint (b) does not apply, you can put in 14 microinverters' worth of solar, maximum, before you start risking a panel overload.

If your AHJ is willing to consider a consolidated group of breakers, located at the far end of the loadcenter bussing from the main, as a single power source for the purpose of applying subpoint (b), then your situation starts looking rosier. In this case, you can use the 120% multiplier for busbar ampacity found in that subpoint, leading to a net effective ampacity of 270A. This means that you have 56A of actual solar current available to you (70A of remaining busbar rating divided by 125%), which gives you enough headroom for your current installation, and permits a maximum of 13.44kW of solar, or enough for the 40 microinverters called for in your four-string ultimate plan. This likely will require a written Code variance issued by your AHJ inspector, though.

There is an alternative solution, but it requires different hardware

Since you do not wish to have a separate AC combiner subpanel in your system, which is the normal solution employed in multi-string microinverter systems, we will need different hardware to meet that constraint if the AHJ does not permit you to operate under 705.12(B)(2) subpoint (3)(b) with multiple sources aggregated on the far end of the busbar. In particular, you'll need to return your panel (which wasn't a bad choice for an additional panel, by the way: your thinking of "get plenty of spaces" was precisely what one should do in the circumstance as getting more slots when you already have the chance is far cheaper than installing another panel later), and get a somewhat more unusual piece of hardware in its stead, known as a split bus generator loadcenter.

Unfortunately, Square-D no longer makes an outdoor-rated split bus generator loadcenter, and never made one in Homeline for that matter, which means that the HOM2200 will have to get returned as well if you go down this path. Siemens makes a suitable unit, namely the W3042B1200GEN, but it (and its W3042L1225GEN main-lug counterpart) are quite scarce/hard-to-find as Siemens/Murray (prefix L for the Murray part number) parts. However, the W3042B1200GEN serves as the basis for the Generac 5453 and 5454 split bus loadcenter/transfer switch combinations; while the Generac 5453 (no transfer actuator) is unobtanium, the Generac 5454 (factory fitted transfer actuator) is readily available, and can be used for this, along with a QN2200R feeder breaker and a few Siemens branch breakers, with some work.

In particular, you'd need to:

This lets you apply 705.12(B)(2) subpoint (3)(b) in a straightforward, "as intended" fashion while preserving your desire to not have a separate enclosure for your solar AC combiner. It does do a fair bit of surgery on the panel, but the Siemens/Generac generator-ready loadcenters were designed and intended for field installation of the transfer hardware, so this isn't such a huge deal, and we are blanking out the spaces designed as reserved for transfer-associated breakers in the loadcenter's wiring diagram as well. Since the panel in question here uses 225A busbars in its upper section as implied by this Siemens drawing, we can safely reuse the 705.12(B)(2) subpoint (3)(b) analysis we performed above for the existing Homeline panel, and we don't have to worry about overloading the lower section as it can handle 125A, which is far in excess of what the Code permits your solar system to expand to.

Of course, if you wish a separate combiner box, nothing stops you from doing that

If you'd rather use a separate AC combiner subpanel for your microinverters, that is of course fine too. I would use a simple 4/8 space, 100A or 125A, NEMA 3R Homeline loadcenter for this, namely the HOM48L125GRB, with a HOM270 in your new 200A panel for the feeder breaker, HOM220s for the branch breakers for now (to be replaced by HOMT220220s in the ultimate configuration), and 3 6AWG copper conductors in a 1/2" RMC nipple for the feeder back to the main panel, mounting the subpanel on whichever side of the main panel the solar circuits come in on. The reason to shortchange this panel on slots is because this panel is reserved for PV sources only, and cannot have loads mixed in without severely complicating the busbar ampacity calculations for the main panel.

I'll grant my experience is not nearly that of ThreePhaseEel. But I would cleave the 705.12(B) gordian knot very simply:

A. The solar problem. Much as I hate outside panels, I would install an "outside" panel that attaches to only solar arrays and the interior panel. Either add a main-lug panel to the disconnect you already have, or combine them into a main-breaker panel that also has panel slots.

Take a picture because you'll never hear me say this again: but get a SMALL panel to deter any temptation to put anything else in here, because this paradigm falls apart if you add any other loads.

The interior subpanel gets a breaker, which cannot exceed the bus rating of the outside main panel. (225A is ok even if the utility main is 200A). Either it is a) a breaker in this outside panel, or b) this outside panel has thru-lugs and the interior panel has its own "main" breaker. From a purchasing POV, the latter would probably be cheaper.

B. Replace the "main" subpanel inside the house with a Rather Large one to solve the "panel full" problem forever. Do not use that new 30/60 HOM panel for this; it's too small. You want a 40-space, and ideally a 42-space (implying industrial grade). It's particularly important here, because you must never be tempted to put anything but solar panels in the outside panel.

My rule of thumb is "finish with 50% of spaces unused", though I also limit myself to 42-space panels because prices go ballistic above that. I normally don't recommend replacing a primary panel, but you a) installed it in the first place and b) can fully de-energize it.

So the condition 705.12 is worried about is now impossible - the loads can't overdraw the 225A panel busing because they are breakered for <= that.

If you ever want to do something with a Tesla PowerWall or other "stay up when the grid is down" system, this provides a nice single place to do all that, at the outside panel (presumably, replacing it).

Not the answer you're looking for? Browse other questions tagged electrical-panel load or ask your own question.

28
Is it ok to have mixed grounds and neutrals on bars in a breaker box?
2
Does a 125 AMP panel require a heavier supply cable than a 100 AMP panel?
2
Is it bad to have a circuit breaker on both ends of a feeder?
2
can a top/bottom feed style sub-panel be fed from back of panel
1
Add new main load center for EV charging
3
Best route to take when replacing an old panel without a main breaker
2
Subpanel feeder cable type to code?
6
Adding critical-loads sub-panel with a PV install, rationale and ampacity calculation
2
100amp to 200amp Service Upgrade