I need a new grill, and I'm going to try to get this in-ground grill up and running. This is a natural gas line that's run from the house. It's been unused in the seven years that we've been in the house. Does anyone know which parts I can use to replace this broken down valve so I can connect to a new grill(not yet purchased)?

I would like for it to continue to have a shutoff, and also be secure to the base which is still very sturdy despite the surface rust. The current "valve", i.e. second parts from the top has a nut holding it to the base.

Do you think the second part can be reused and just replace the top part? That would make my search for the needed parts easier but obviously need it to be safe. 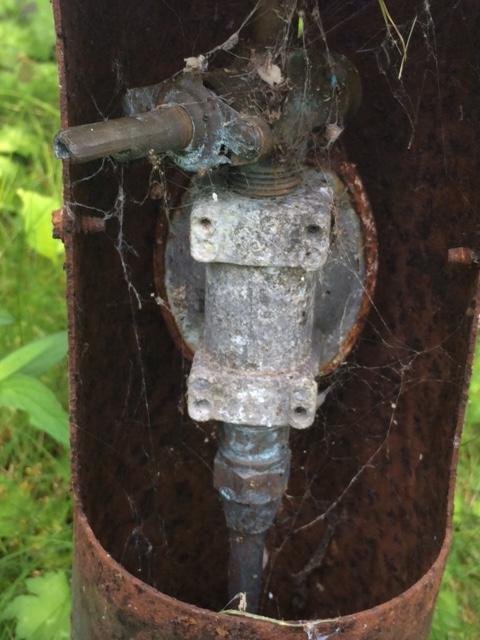 I suggest not reusing anything ; disconnect it at the copper tubing and put in a new stainless flex pipe ( and adapter as necessary) to connect to a new grill. When I replaced a similar grill , I also found the steel pedestal tube/pipe was also severely weakened by corrosion at ground level.

Not the answer you're looking for? Browse other questions tagged gas valve or ask your own question.

5
The main water valve won't open fully after I closed it. How do I shut off the water to replace it?
1
How do I replace this toilet shutoff valve?
2
Are some water valves poor quality?
0
What options do I have for replacing this sillcock?
2
Leaking Washing Machine Shut Off Valve
1
Washing machine shutoff valve won't close
1
How to loosen nut without damaging toilet shutoff
2
What is happening to the surface of this shutoff valve?
1
What causes this brown discoloration in residential water supply?
2
How do I estimate BTU usage to properly size new gas line?