Warning, this may be a bit long ... I'll do my best to be brief but it's a somewhat complicated situation. Primary issue is that the AFCI breaker trips in a very random pattern that I can't figure out; secondary issue is that said breaker seems to have way too big a load and I don't fully understand the wiring.

The basement in my single-family house was finished by the previous owner in what looks like a combination of professional and DIY work. There are a few weird things about the wiring:

Thanks in advance for any help - this has been a pain for the last 2.5 years since I moved into the house; I'll really be thrilled if I can get it fixed! 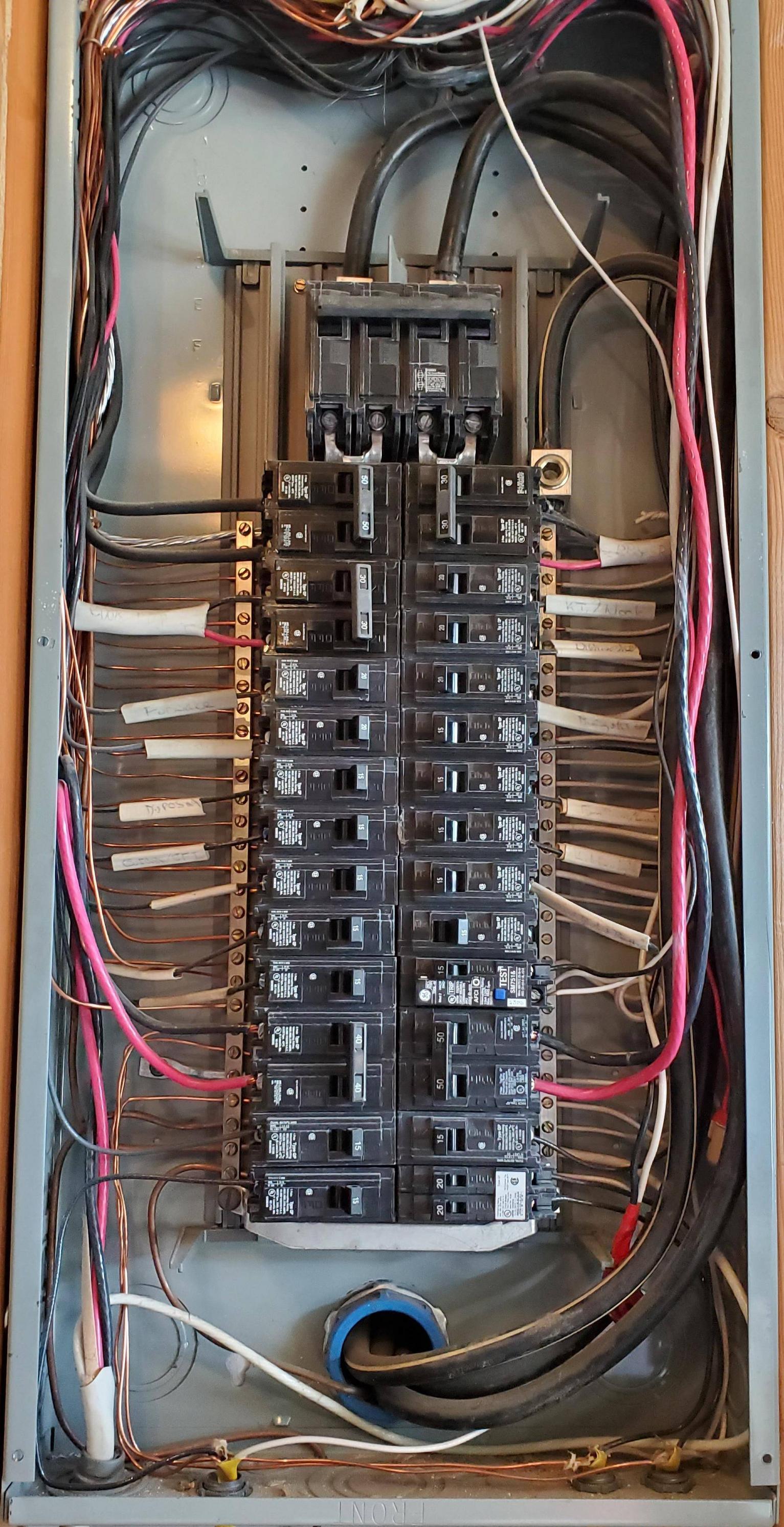 AFCI generally detects problems with wiring, but can be triggered by certain devices that may or may not be a dangerous situation. The more devices, receptacles, wire connections, etc., the more likely that (a) real problems will crop up that are actually being protected by the AFCI and (b) false "nuisance" trips will happen. But until you know for sure, you should assume the trips are "real".

Do you need AFCI? Probably, but depends on location. Unlike GFCI, which is life-safety based such that out-of-reach (e.g., lighting) is normally exempt), AFCI is fire-safety based so lighting is as in need of protection as anything else, subject to local code requirements.

You can connect two circuits to one breaker. You use a pigtail to connect to the breaker on one end and the two separate circuits on the other end (pigtail plus the other 2 wires in a wire nut). However, that doesn't really gain anything here since your total current is limited by the neutral wire, unless you go to an MWBC.

What you have described as a solution is a MWBC. Basically you have two hots and one neutral == /3 cable - connecting to two breakers. There are a number of catches to this:

Note that an MWBC is not "two separate circuits". It is one multi-wire combined circuit. Effectively two circuits in one, but the savings being 3 wires (plus ground) instead of 2. Neutral "cancels out" which is why it works in general but also why it must be on a properly installed double breaker.

Two truly separate circuits would require 4 wires (plus grounds) - i.e., each circuit needs its own paired hot & neutral. An MWBC shares the neutral in a safe way.

Unfortunately that GE AFCI breaker is an "alien breaker" which does not belong in a Siemens panel. It needs to go. Sell it on Craigslist. Whether to go with a 1-pole AFCI or 2-pole AFCI will soon be discussed.

What you had was a multi-wire branch circuit, which is 2 hots sharing a neutral. It's a common technique to get two 120V "quasi-circuits" out of one cable. It requires careful breaker choice and placement with many ways to botch that up. As far as we know, there was nothing wrong with the MWBC.

The last guy converted to AFCI. He didn't do the conversion for chuckles. He did it because he had to. That means you are not at liberty to remove it.

He converted it to a simple circuit, by joining the hots at the panel. There is nothing wrong with doing this, except he can't put 2 wires on a GE breaker, so he should have pigtailed. Trivial flaw. He did that because either he didn't know how to connect an MWBC to an AFCI, or they didn't make 2-pole AFCIs for this panel at the time, or he was too cheap to get one.

I have to say, the "join the MWBC" plan isn't so unreasoanble in the age of LED lighting, where 200 watts of lighting does the work of 1200. Since you haven't been reporting any overcurrent trips, I don't see why you're "complicating things" by chasing a non-problem.

Obviously if two hots feed the same neutral, the neutral will overload. MWBCs exploit a feature of split/multi-phase power to get the neutral to carry only differential current, but the hots must be on different poles/phases.

In the old days, this could be done with careful, competent placement of the breakers. However nowadays idiots open up panels and move things around. Further, the Electrical Code now absolutely requires "common maintenance shutoff" for the two half-circuits, so at the very least, breaker "handle ties", but those aren't perfect so we recommend a 2-pole breaker.

Regardless, you have to use a 2-pole breaker because a 2-pole AFCI is the only thing that can support a MWBC, given your panel.

The root of your problem here is the nuisance trips. These are happening because arcing is occurring somewhere in your wiring.

Unfortunately, your option is to go through all the wiring carefully and look for loose connections - wire nuts improperly done (don't survive a "pull test"), or the #1 source of arc faults, backstab connections.

The GE AFCI is an alien breaker and does not properly fit the panel bus. This could create arcing, damaging the bus stab. In fact, that may be the arcing it is detecting!