I want to remove a 1960s era mini wideset faucet that does not have any set screws or mounting bolts underneath to remove the faucet components. My faucet appears to be similar to another StackExchange post (How to take apart this Pfister faucet?) although I can't confirm the make or model of mine. I wasn't able to comment there so I'm opening a new post looking for help. 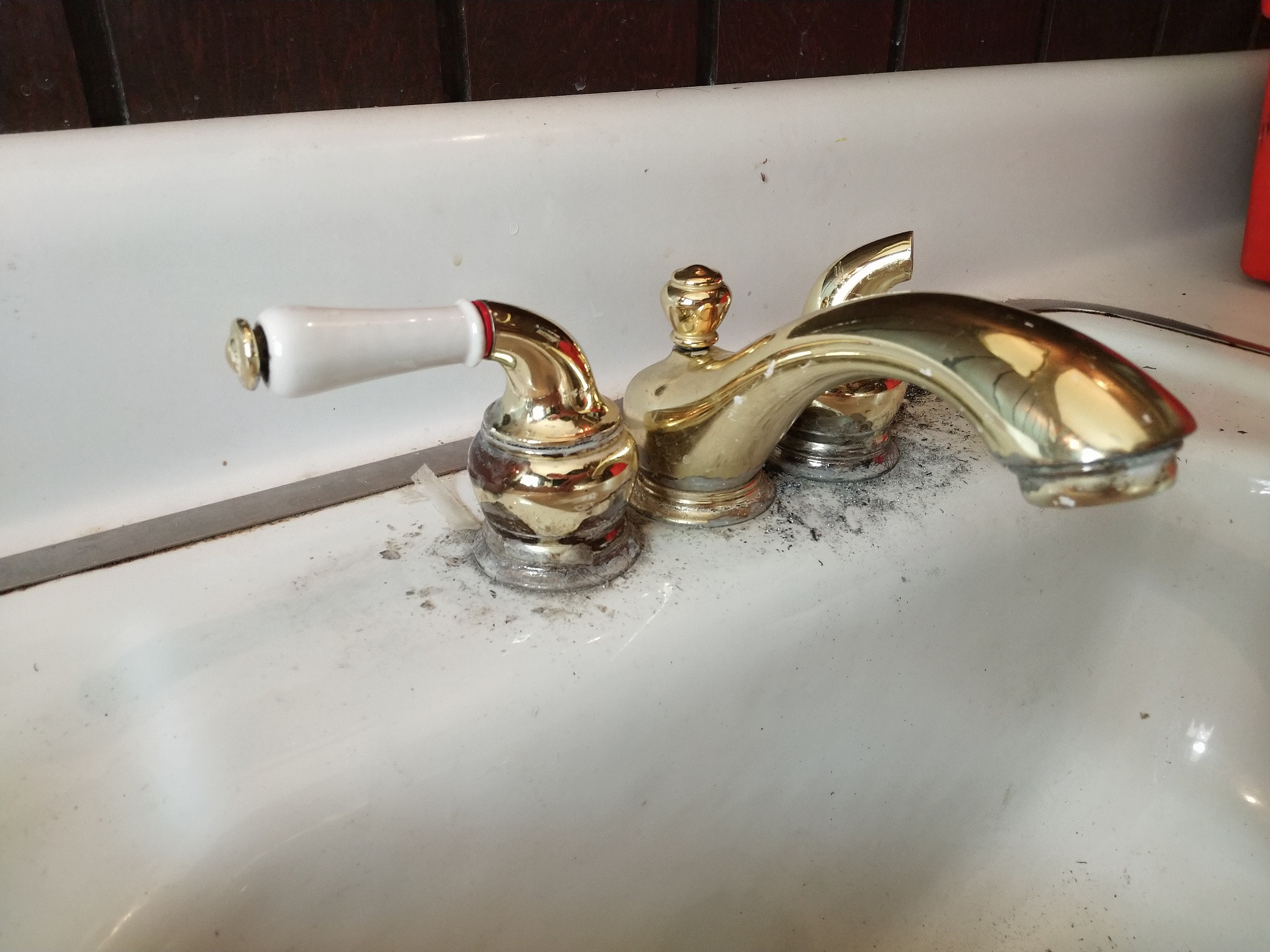 I'm not sure about the other posting, but on my faucet I've found that there's a brass mixing valve underneath the sink. I believe that this mixing valve may be keeping everything in place. But I can't figure out if I need to remove the faucet handles first, or try removing the mixing valve first. 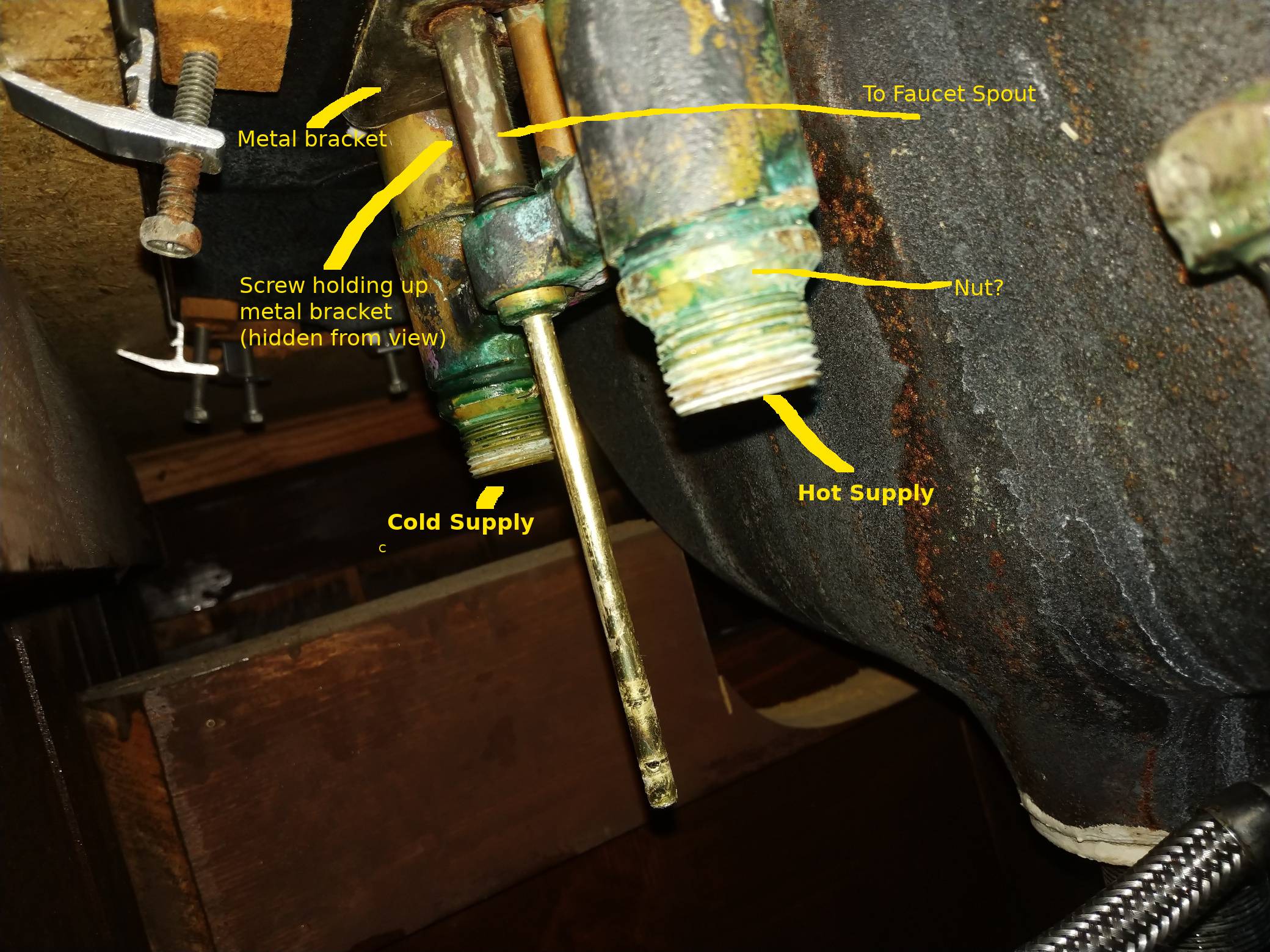 There looks to be two nuts on the threaded supply line pipes on either side, but I can't pry them loose. Maybe they're stuck (or maybe they're not nuts after all?). Also there's a metal bracket right up against the underside of the sink; there's a screw between this bracket and the mixing valve (hidden, behind the faucet spout supply). There is no nut or anything on that screw to deal with that right now.

Any thoughts? Thank you!

Update 1: after some more attempts as the faucet handles, I looked at the spout instead. When I pulled out the drain stop handle I looked down at the remaining hole and voila - a hex screw. I opened my toolbox and I had two Allen wrenches. I tried the larger one and sure enough it fit (I measured 3/16ths). After a few dozen turns the spout popped off, leaving the following behind: 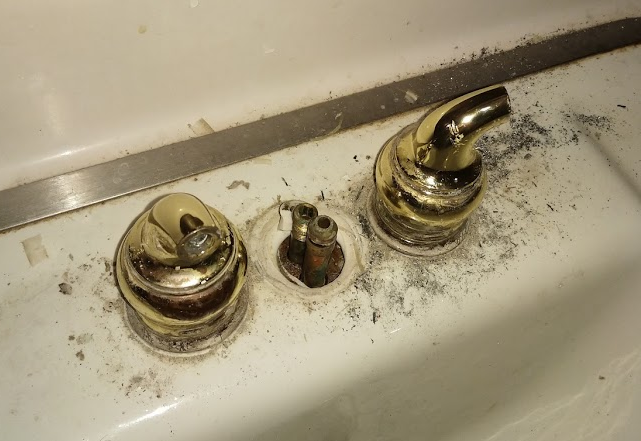 I was able to push the drain spout pipe out to the bottom, leaving the supply line to the drain spout, and the threaded bolt that was hidden in the picture above. That also had a hex screw hole, so I pulled out the other Allen wrench I had. Sure enough that one fit too (both were from Ikea assemblies, go figure). The size on this one appears to be 3/32nds. 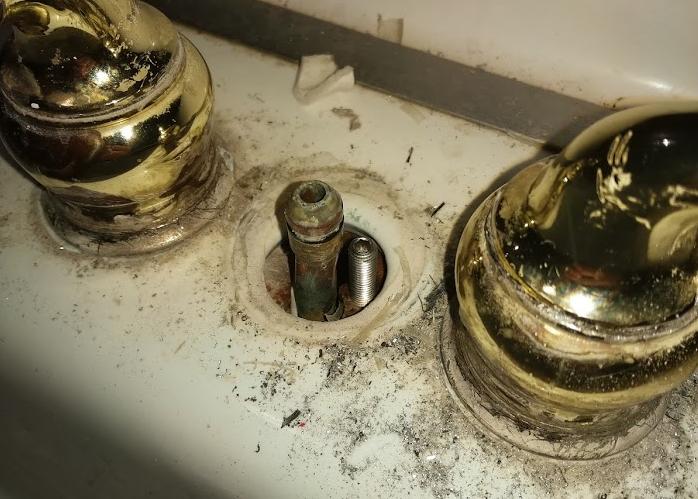 After a few dozen turns, the metal plate securing the mixer valve to the underside of the sink was loose. The faucet handles are still connected to the mixer valve; this is where I'm stuck now. 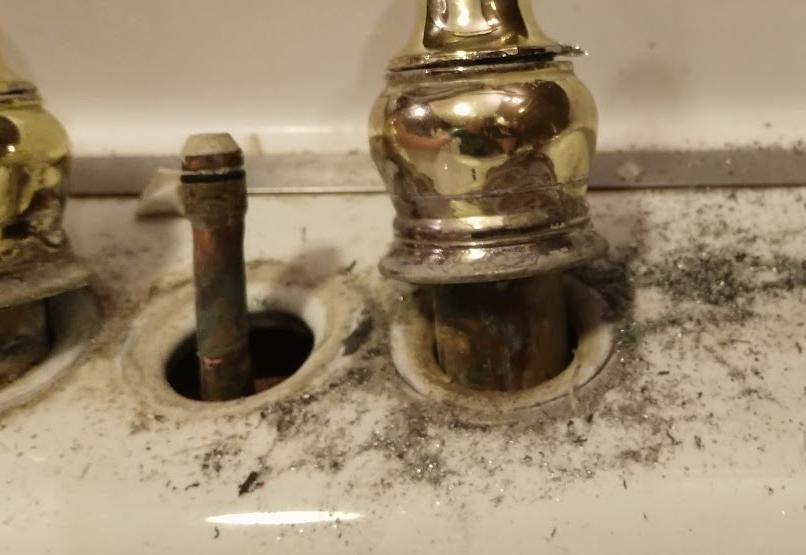 The faucet is a Moen, model 4560. It was imprinted (but mostly worn away) on the back of the faucet spout.

All guides and videos say that the bulbs on the handles just screw off easily. That wasn't so here. In the end, after numerous attempts, I hack sawed off the handles. Not elegant but in this situation it was what was required.

Only thing I can imagine is first remove the handles (you have already done this on the right side). Then turn the stub handle on the right side CCW to the stop and see if it will unscrew if you would keep turning CCW. The left side would be turned CW.

This will expose a threaded portion below for which you may turn both sides the same CCW to unscrew or the left side might be CW to loosen.

Not the answer you're looking for? Browse other questions tagged faucet or ask your own question.