My first ever post here. Can someone explain to me the best strategy for freeing up a pole/slot so that I can install a two-pole 50 amp 240 volt circuit on this panel? I have a free slot at the bottom left.

I want to use a tandem circuit, but I'm not sure which existing circuits would be ok to swap out. My panel is "twinable" (see panel label sticker below)

If I've understood correctly, I can't use a tandem circuit to consolidate the two bottom left circuits because they are AFCI.

Above those two AFCI circuits I have 3 circuits that I think might be candidates for combining into a tandem circuit. Can someone tell me if those types of circuits are eligible for being replaced by a tandem? If so, would it be better to tandem the 20/20 and shift the three below it upwards? Or would it be better to tandem the 15/20 and move the two AFCI circuits upwards? One final note: of these 3 circuits, the top-most 20 amp circuit is labeled "Bath GFCI", so I'm not sure if that can be put on a tandem circuit.

Final note: the new 50A 240V circuit will be used to power a NEMA 14-50 plug that I'm going to install in the wall below the panel. It will be used to charge an electric vehicle (Tesla Model 3). 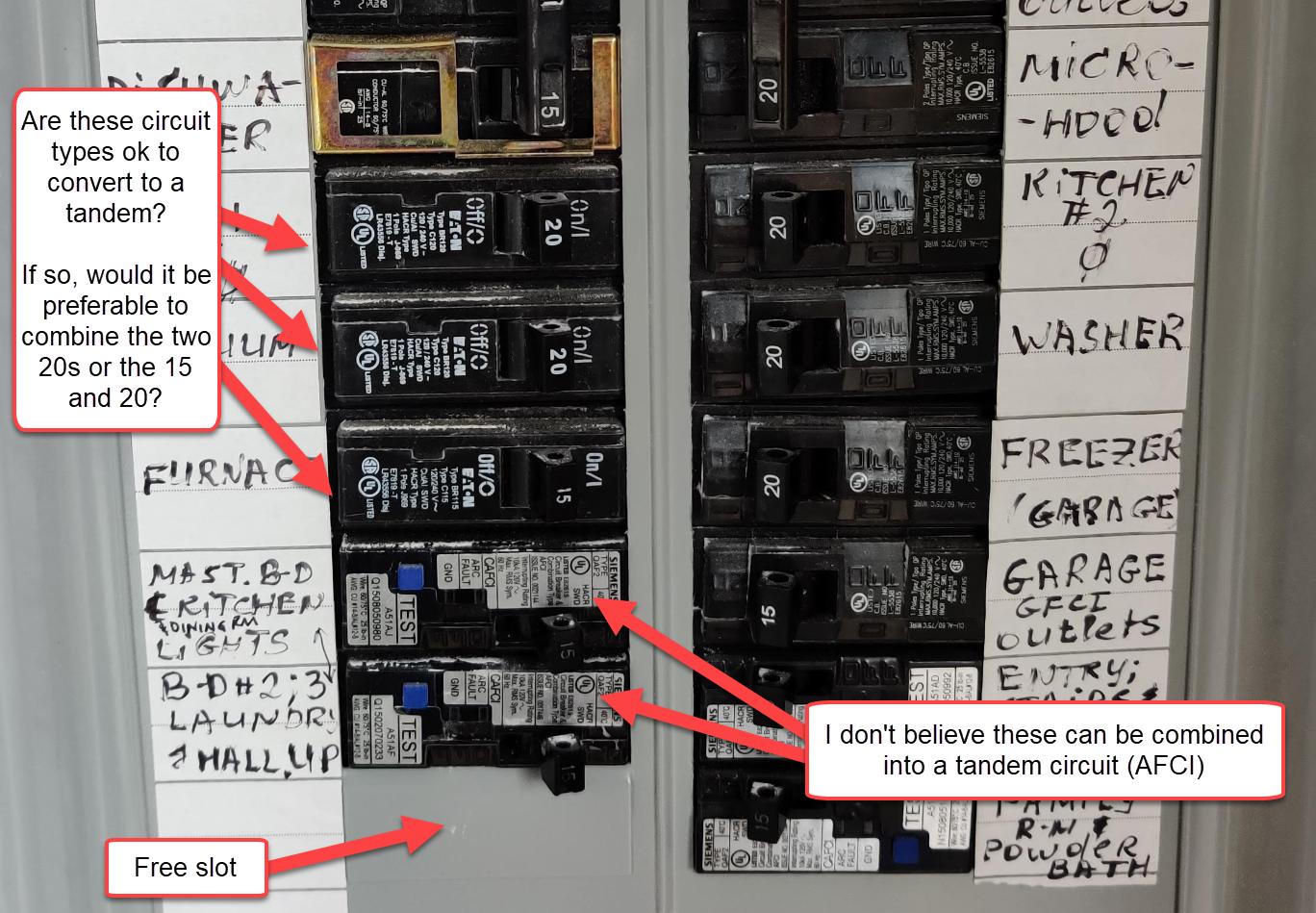 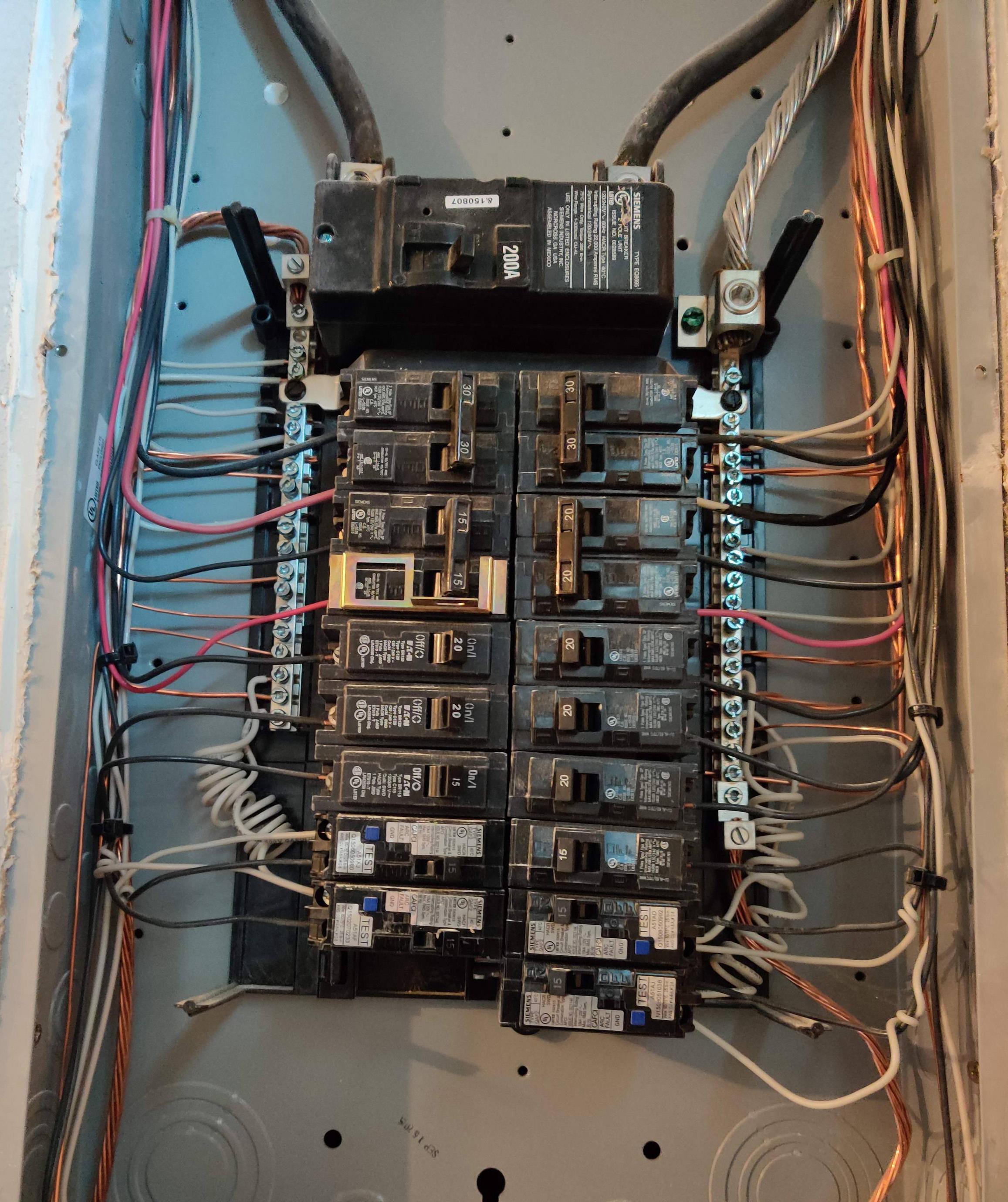 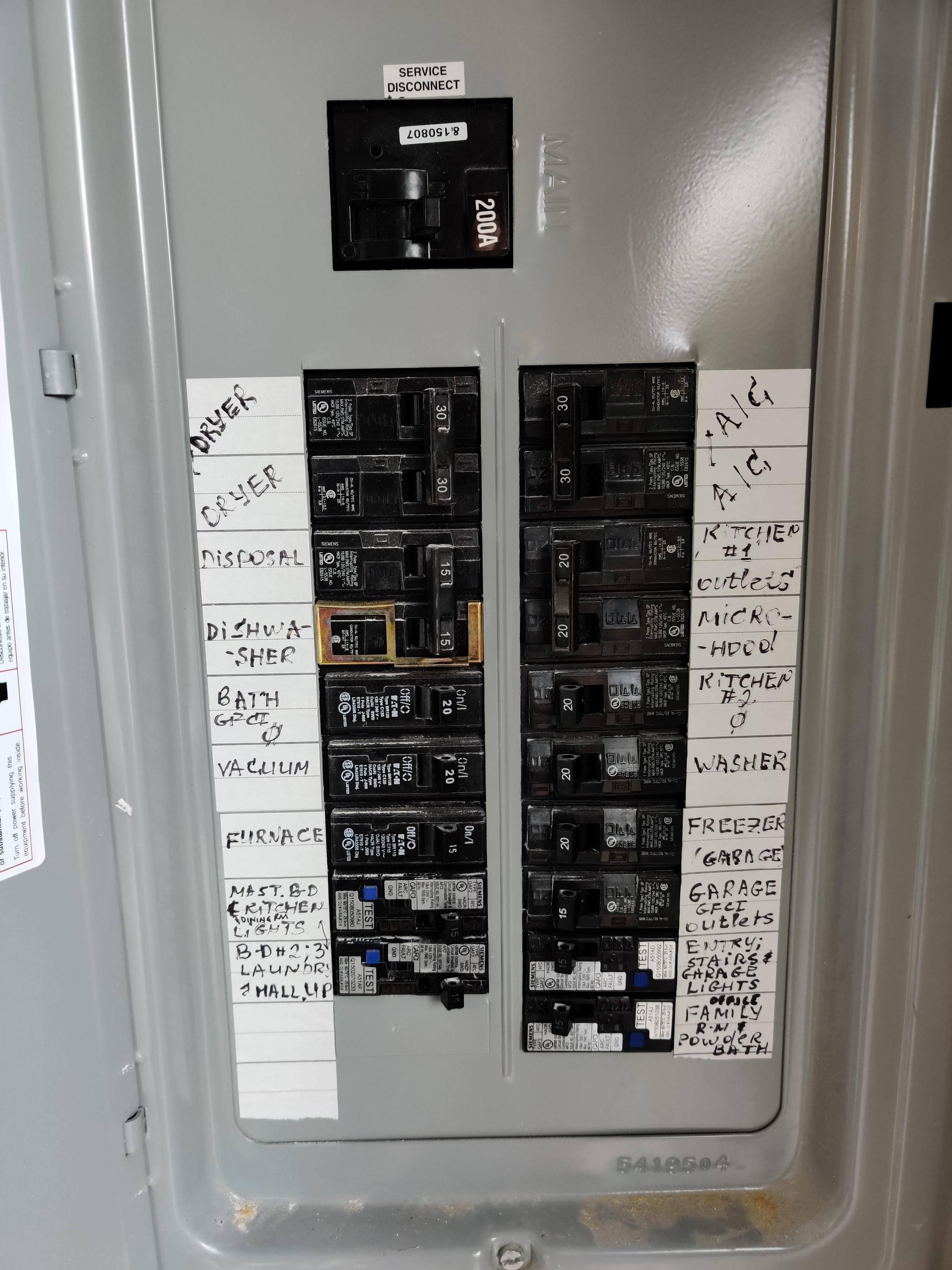 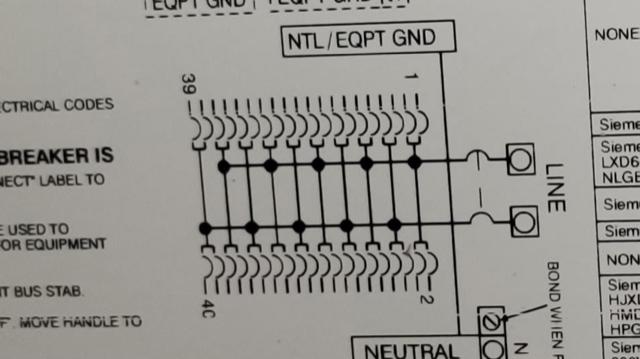 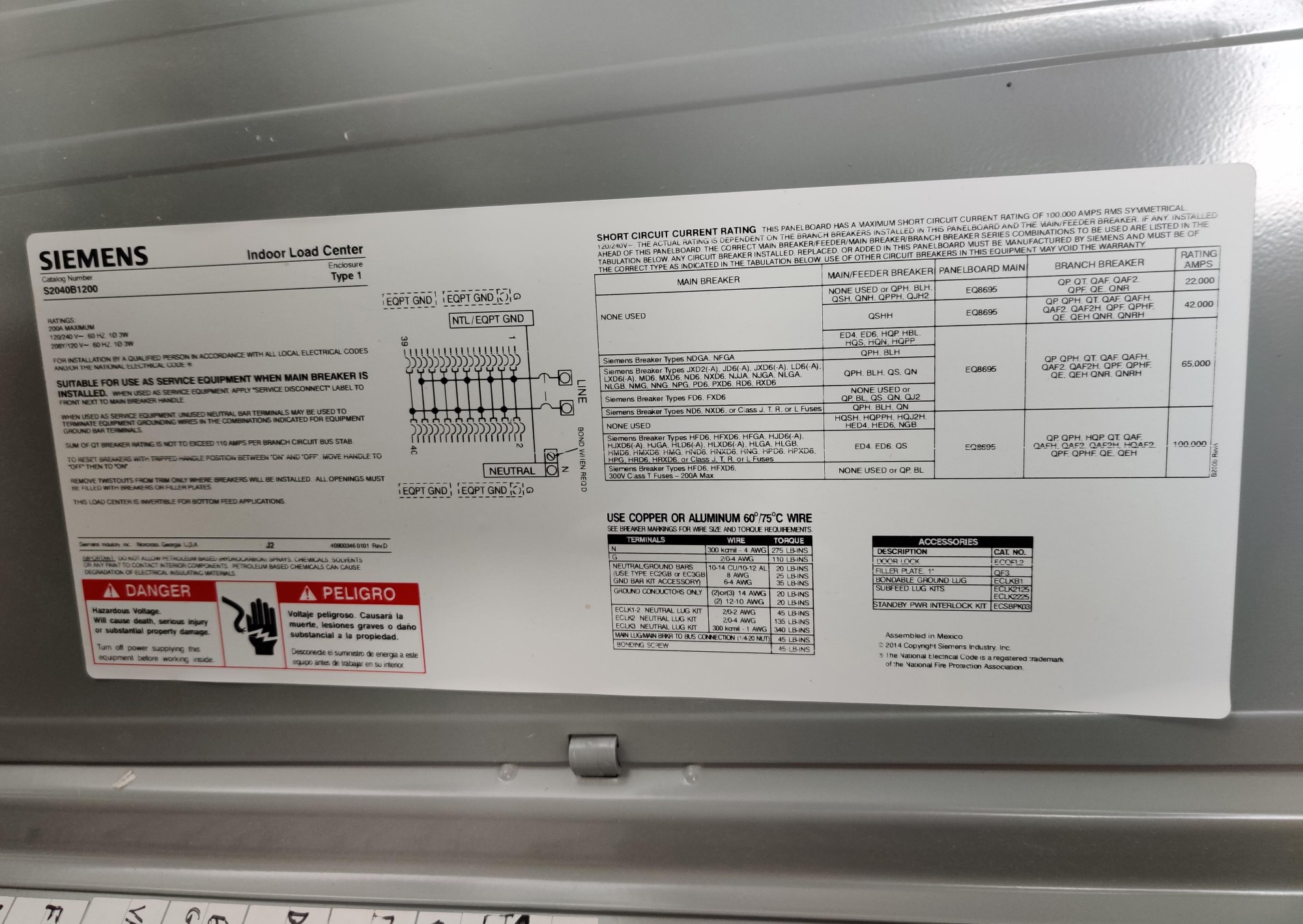 The worst danger to double-stuffing breakers is encountering a multi-wire branch circuit. In that case, double-stuffing can overload the shared neutral. However, I don't see any markings on your wires, so it appears they are installed in cable, and all your single-pole circuits are installed with their own /2 cable. If that's so, then you have two multi-wire branch circuits in the box, already on 2-pole breakers where they belong, and I trust you'll keep them either on 2-pole or the inner 2-pole breaker of a quadplex. These are

You have a Siemens panel, but you have Eaton "BR" breakers in the panel (the ones you consider candidates for replacement). Those are alien breakers and should be removed immediately. They may seem to snap in, but if you compare them to how a proper Siemens breaker snaps in, they feel different; that difference is the breaker not engaging properly to the bus stabs, which could cause arcing under load. That will destroy the bus stab, and now you'll have an 18 space panel. So those BR breakers disappear - today. And the guy who installed them isn't invited back.

What might've confused that guy is that Eaton does make a "CL" breaker line, specifically UL-classified to replace your Siemens Q115/Q120 breakers. However BR is not that line, note CL breakers are not classified for BR panels. CL costs more and is much harder to find, so there's no earthly reason to go that way unless you have a high volume commercial account with an Eaton dealer (or want Eaton-only exotica like CLR "remote control" breakers).

You are correct, AFCI breakers are not available in double-stuff. The most you could do is combine 2 circuits onto one AFCI, but it appears your existing AFCI breakers are heavily oversubscribed already, serving more than one room each. Somebody really, really chintzed out on this panel, and is putting you to considerable inconvenience. Well, I hope they really, really, really enjoyed that pizza (the one they bought with the savings on not getting a properly sized panel).

At your very first opportunity, you will want to install at least a 20 space subpanel, either here, or somewhere more convenient to your loads. A proper house, especially one with 200A service, needs 40+ spaces. There's always another load, and "I'm out of space, help" is a top question here.

I see a couple options. The first one is simpler/cheaper, but the second one prevents future problems.

Replace the three alien BR breakers with a Siemens QT type ("Q" Twin) Q2020 duplex breaker, and a Siemens Q115 one-pole. That frees up one space, and gets you home for about $14.

You know the problem where someone replaces a multi-wire branch circuit 2-pole with a duplex, and overloads the neutral? This option has a big advantage: it heads that off. This overstuff problem isn't going to go away, and somebody's going to come along and want to compress those big 2-pole breakers. So we're pre-emptively double-stuffing the MWBCs so the next guy can't screw them up. 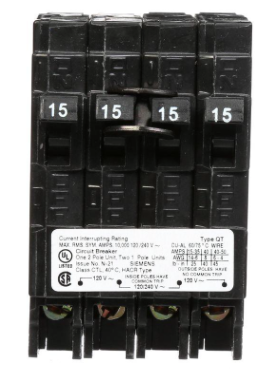 We replace the 15A 2-pole MWBC (Disposal/Dishwasher) with with a Q21515CT quadplex. (15A singles and 15A inner 2-pole). We are stuck doing this because this is the only quadplex readily available with 15A in the center. That is where the MWBC goes. The two outer 15A's are independent 1-poles. Your panel has two singleton 15A circuits -- "Furnace" (which must be a separate breaker) and "Garage/GFCI". Those move to the outer terminals of this quadplex.

Then, let's kill two birds with one stone. Pre-emptively replace the "Kitchen#1/Micro-hood" MWBC 2-pole, in similar fashion, with a Q22020CT 20A-all-around breaker. Then, likewise, move two 20A single circuits to the outer positions. I would say go with what wires will reach. This does one other useful thing -- frees up two real Siemens 20A breakers. Those replace the alien BR breakers, which go on Craigslist unless you need them to fill empty holes.

This scenario will cost you about $40 plus some 12 AWG pigtails, because Mr. Snippy didn't do you any favors by nipping off the wires to barely what's needed to reach the breakers now. Future note: Every circuit should have its hot and neutral both long enough to reach every breaker space in the panel. Neutral for GFCI or AFCI.

This option will create some empty holes in your panel. Slap any handy breaker in there, and don't connect it to anything, just put a sticker with a red X on the breaker. If it's a BR breaker, spray-paint the whole breaker red to deter people from using it.

To just answer your question you would want to tandem the two 20 amp breakers. You don't want to tandem a 20 amp and a 15 amp because of the different amperages: you'd be over sizing the 15 amp circuit & #14 awg wire with a 20 amp tandem or under sizing the 20 amp circuit with a 15 amp tandem. Then just lower rest of the breakers to the lower slots.

What will the new 50 amp circuit feed? There is always the question about changing out the panel when adding a large circuit. It looks like you have gas because you don't have an electric water heater, strip heating or oven/cooktop so your panel should be ok.

OK here's where you can start. The current 15 and 20 amp tamdem breakers cannot be moved since they share a neutral which is allowed if each breaker is connected to a separate phase, thus the mechanical attachment. Otherwise you will overload the shared neutral. That leaves you with bath gfci, vacuum, furnace on the left side of the panel and kitchen #2, washer, freezer, and garage on the right.

Your panel schematic does show that the panel can support 1/2 size breakers. So I would try and select circuits that use the least amount of power for moving to the 1/2 sized breakers. I would also used a full size tandem 50A breaker rather than opt for a 1/2 sized 50A tandem. The reasoning is that if you look at the connection point of the 1/2 sized breakers the attachment point is about 1/2 the area of a full size. I have replaced many panels due to the fact that these larger amperage 1/2 sized breakers have burn't up the bus. I will acknowledge that they are allowed by code but I have witnessed the results.

One final note, when using 1/2 sized breaker only the original manufacturers breakers will fit in a 1/2 sized slot. In your case you need to use Siemens style breakers.

4
Using a 30-amp tandem circuit breaker for a 120/240v circuit?
3
Upgrading 2 breakers to AFCI, always trips
2
Can a single pole (normal/regular) circuit breaker be used in spots designated for tandem?
1
How to add a two pole 40A breaker with corner tab(s) to Challenger panel?
2
What type of Circuit Breaker is required for this slot?
0
Seeking advice on how to rearrange existing breakers and add 2 circuits, including a 20A GFCI/AFCI breaker in a split-bus GE panel
8
Can someone explain this Tandem Breaker Setup to me?
0
Configuration for new Electrical panel load and balance?
4
Alternatives to replace tandem single pole MWBC breakers?
3
Can this CH breaker panel handle tandem breakers