I recently purchased a twin pack of Kidde smoke detectors. One thing I noticed is that one sounds off at a slightly higher pitch than the other. A friend purchased two detectors of the same mode as mine, but purchased them separately, one at a time. Each of his alarms also sounds off at a different pitch. I could not find anything online or in the manual. Is this normal? Or would it be a defect in their current production batch? It's after hours so I could not reach Kidde, just something that's keeping me interested in my caffeine-induced insomnia!

The device that produces the sound is a piezo-electric transducer: 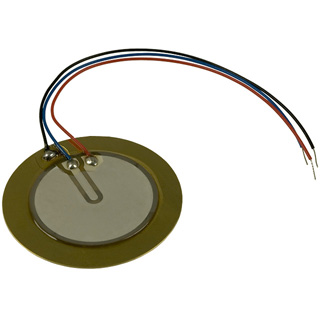 It works like a speaker, but as you can see, it has three wires, not two.

This positive feedback mechanism means that the transducer will be sounding at its loudest possible volume. Think of a wine glass ringing when someone sings the perfect note that matches its resonant frequency.

A similar thing happens in two-stroke gasoline engines. If you've ever ridden a dirt-bike, you might have noticed that there is an RPM sweet-spot that provides maximum power. Again, this is produced by resonant feedback from the exhaust system that causes, at that one frequency, unburnt fuel in the exhaust gas to be forced back into the cylinders. Every engine will have a slightly different sweet-spot and sound slightly different from every other engine.

A slightly different pitch would be normal manufacturing tolerance.

What is required (at least in the UK, and probably throughout Europe as there's an EN standard for fire alarm systems) is that all interconnected fire alarm sounders should be synchronised in cadence so:

would not be allowed.

The alarms sound different as the sounder units are likely set to slightly different settings.

If there is some sort of adjustment then you might consider trying to adjust them. You could find software or an app to show the frequency & pitch etc to try to get them to be similar, but at a guess identical won’t happen.

17
How do I choose between ionization and photoelectric smoke alarms?
2
Should smoke alarms be on AFCI circuit?
3
Can an electrician run wiring to convert battery powered smoke alarms to wired alarms?
3
Nuisance smoke alarms
2
Explain different type of fire detector?
24
Why should we replace smoke alarms every 10 years?
2
Wired fire/smoke alarms not communicating with each other