Some past "plumber" decided it was OK to cut a notch for a 1-1/2" PVC pipe directly through all the 2x4 studs on one end of a window header. The result, shown in the photos, is a buckling wall. 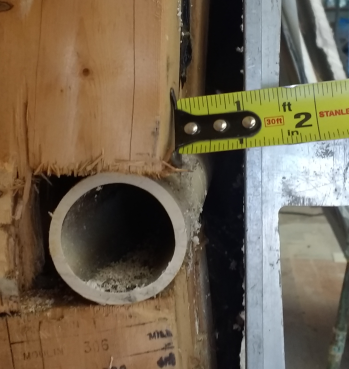 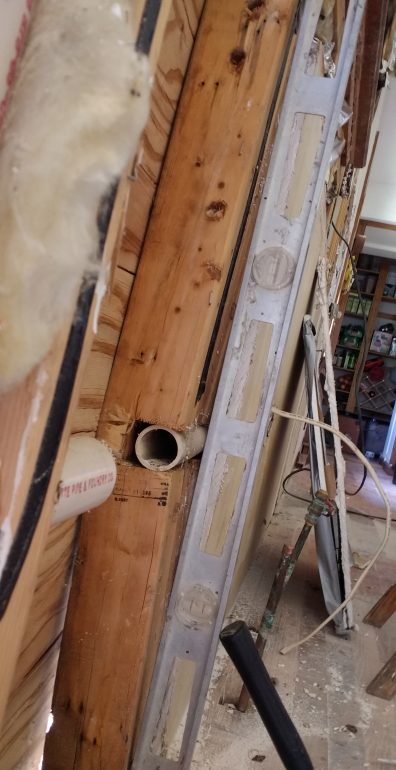 The studs are actually pinching the PVC pipe now, which maybe helped to arrest the problem.

Of the four studs affected by this, one is a cripple under the window, and the other three are king/jack studs. The window opening is only ~38" but this is on the ground floor of a 2 story house.

(This is US-style construction, in case that wasn't clear).

As it happens I have access to both sides of this wall due to the work going on. So I can work easily from the inside or outside.

Looking for feedback on any/all of these ideas or alternatives!

I'm experienced enough to execute any of these ideas, and have the tools do to so. But this is bad enough that I'd value other's opinions on the approach. Ultimately I want to choose a solid long-term repair whilst avoiding excess cost/labor/etc. But I've no need to "cut corners" or do only a "band aid" fix.

Just as a commentary: among the stupid things I've discovered over the years of rebuilding my house, this is the most thoughtless.

After looking at the pictures again I think you need to go with your first solution. The other two solutions are just band aids and would probably take more work than the first one. Maybe replace the cripple first and support the window header from it. Then a floor jack to the top plate and get the king/jack studs all at once. Good luck and keep us posted... maybe a few more pictures.

I took off some exterior materials and could see how badly damaged the studs were. Aside from the bending there were lots of cracks around the notch, and I wasn't sure if that remaining material could really still support its load.

Since part of the ongoing project was to replace the adjacent window, this gave access to the entire space under the header where I was able to insert a jack post. Doing this made a full replacement of the studs a lot easier than it might have been. In a more difficult circumstance I think sistering some material most likely would have worked, but (thanks to the perspective in other answer) it seemed clear that the correct fix was the best fix.

Some photos of the fix...

Some cracks in that area: 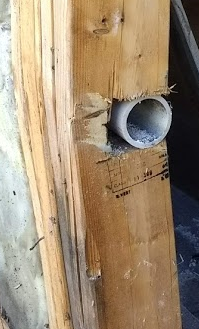 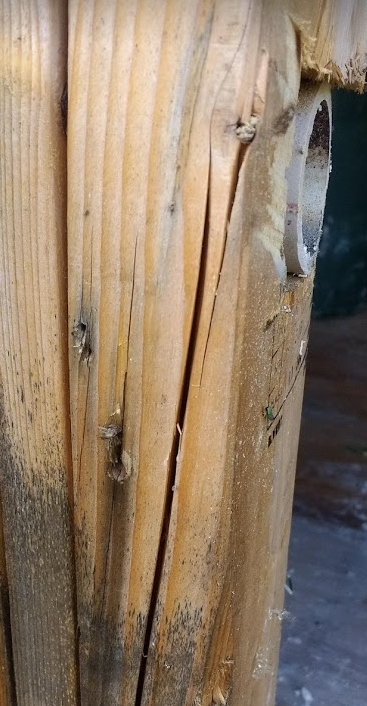 First step was to jack the buckled section back to vertical. I felt that if the floor above had sunk at all, this would get it back as close to possible to the right height. It was much easier to use this hydraulic jack in this position that it would be to use the screw jack post to elevate anything. 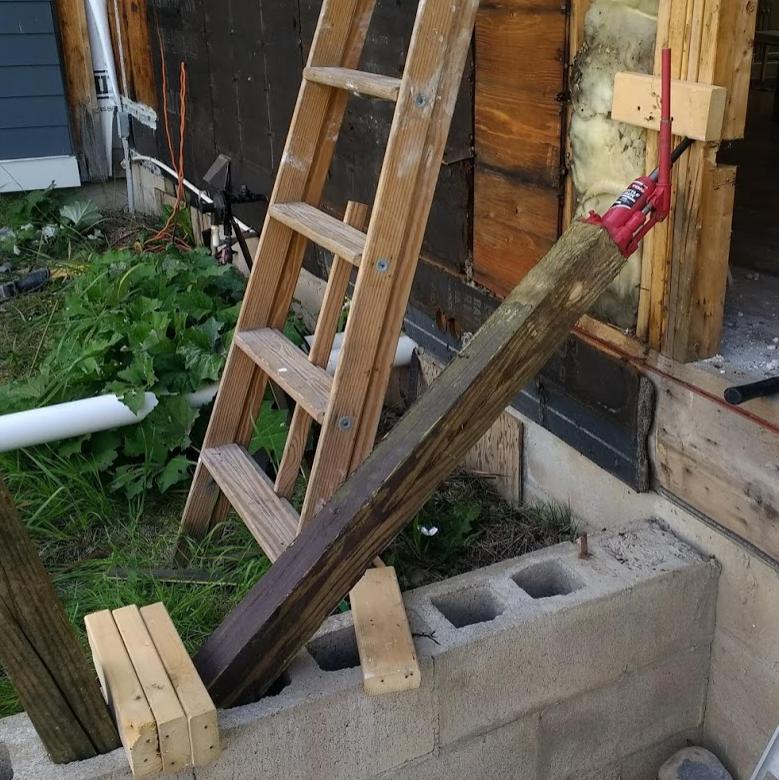 When it came back to vertical you could hear a little bit of noise as the framing moved. The pinched pipe also came right out: 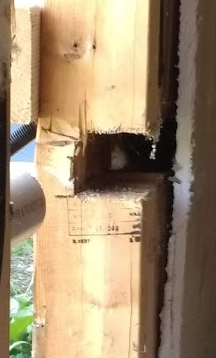 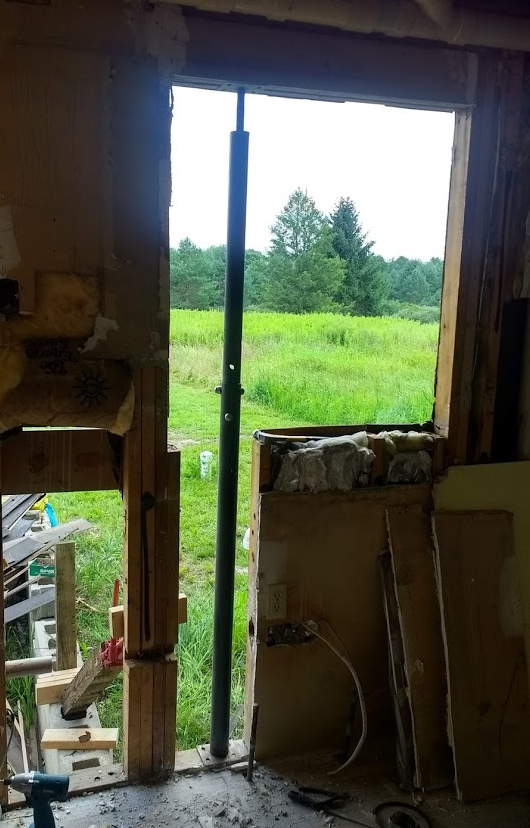 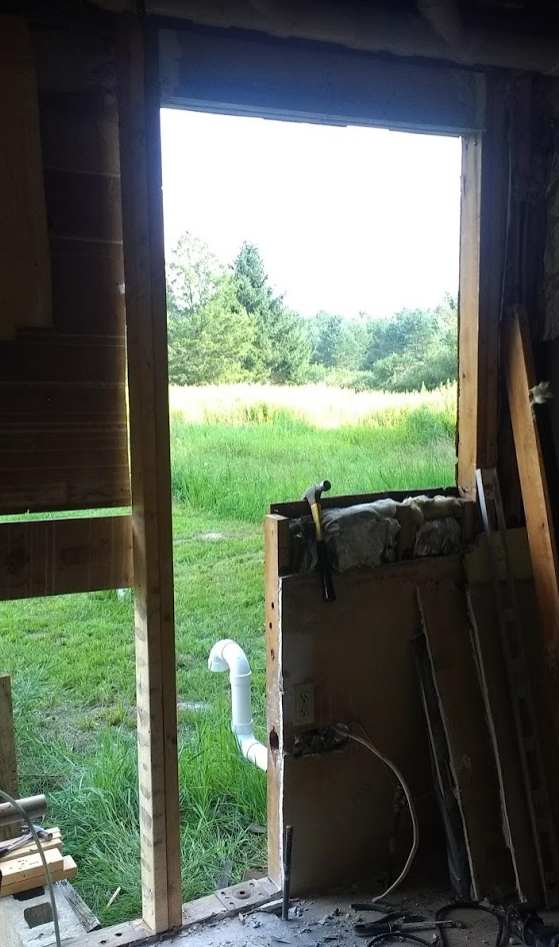 Not the answer you're looking for? Browse other questions tagged repair framing carpentry or ask your own question.

21
Will removing shelving screws from studs damage the studs?

9
Proper size of header to support new door in load bearing wall?
3
I can't notch king studs to fit an electrical box, right?
1
Repairing rot in window framing
1
Window framing gaps and split wood
1
What is the best way to add new stud framing above fireplace and tie it into existing framing?
4
What are the steps to raising an interior wall header?
3
Can I use blocking between floor joists to support off-center jack studs in a load-bearing wall?
1
How to work around bowed king stud for a window frame?