Can I convert a fused dryer outlet to two 20 amp circuits?

We have a dryer plug we no longer use. We would like to make it a quad outlet box instead. The outlet is wired to a fuse panel with 2 30 amp cartridge fuses. Is it within code to switch those 2 fuses to 20 amp fuses and then wire the existing wires to 2 separate outlets with a shared neutral. It is a 208 circuit currently which should make the shared neutral just fine, but I want to make sure. I also thought about putting 2 gfci outlets instead of regular ones so that if it does trip we can simply reset it, instead of having to replace a fuse. 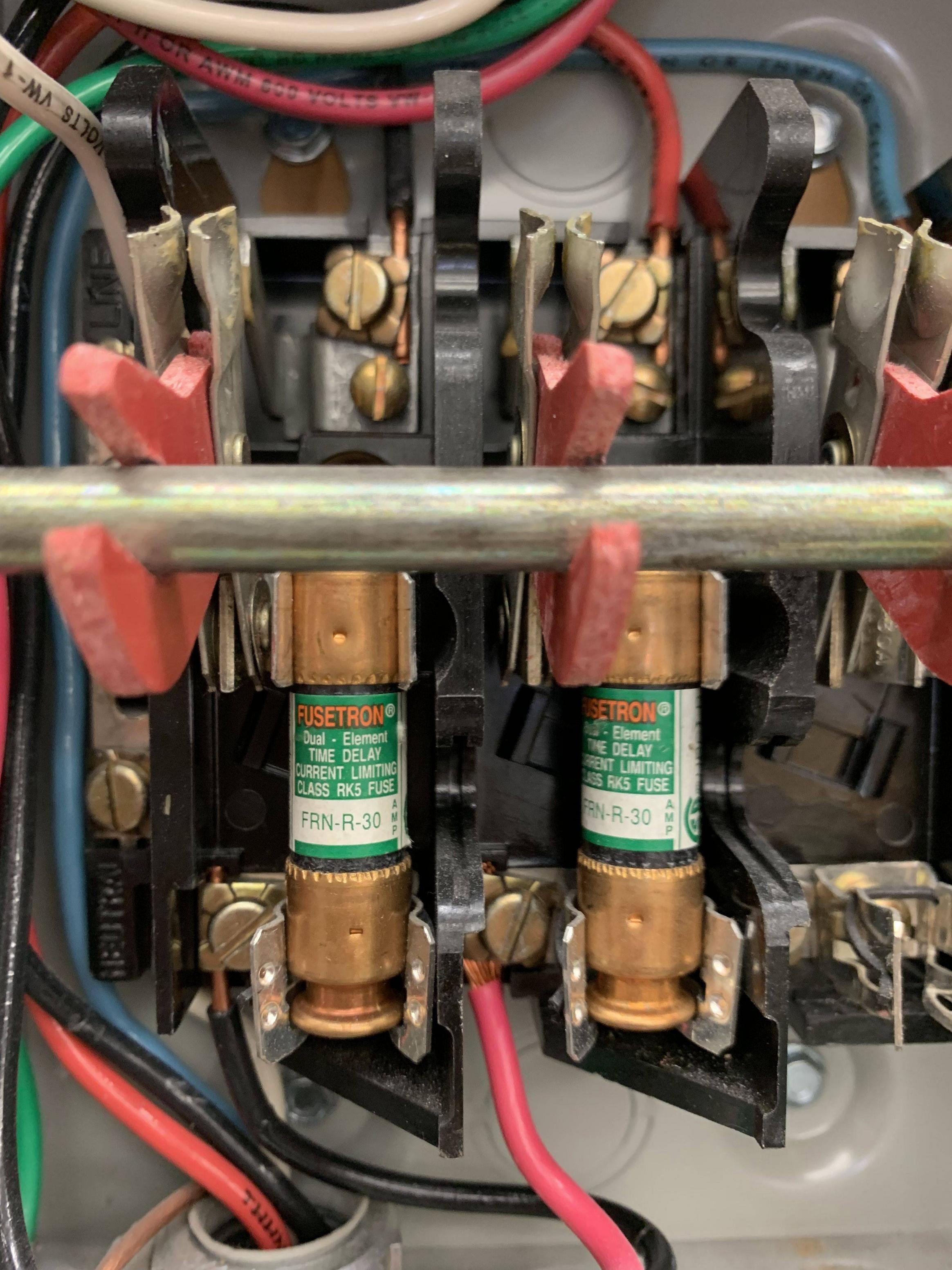 That guarantees it is fed from somewhere else. Somewhere else, there will be a service panel of some kind. The vast majority of service panels generally are circuit-breaker panels, (with equal chance of being modern, old or ancient). So there's good chance of it being a circuit breaker.

The breaker and fuses do the same thing, so their protection is redundant. Actually the fuses are worse because they are not common trip, which is helpful for 120/240V appliances like dryers and ranges.

You can then change the breaker to 20A, and completely ignore the fuses. This application doesn't require the fuses, and many don't, but many do require a disconnect switch. Could be the installer grabbed the first disconnect switch he found, or got bad advice, or the cheapest one happened to have fuses.

So go find the actual service panel/breaker that feeds this location.

Imagine you take $9000US of cash through TSA security at LAX. TSA will not warn you that it will be confiscated in Toronto, it isn't TSA's job to screen for that.

It sounds like you are thinking GFCI receptacles will trip instead of the fuse. Just for the record, they are looking at totally different things. The GFCI will cheerfully flow 50A or more as long as hot and neutral current are equal. It will not trip for overcurrent, not even a little, that is not what GFCIs do.

The GFCI will trip for as little as 0.008 amps of imbalance current, and the fuse won't care about that at all.

However, if the advice above works out for you, there will be a 15-20A breaker in series with the fuses. The breaker should trip before the fuse in most cases.

Not the answer you're looking for? Browse other questions tagged electrical receptacle circuit-breaker cord-and-plug or ask your own question.

4
Why does a GFCI breaker trip when another breaker is accessed?
1
Why doesn't my tester trip the GFCI?
1
Can I split a 208/120V 3-phase circuit into 3 separate 120V circuits and keep the shared neutral?
1
What type of fuse should I use for my GFCI kitchen receptacle?
0
GFCI's on BLACK/RED dual 15-amp circuits
1
Two 20-Amp circuits in one box for outlets
1
Best approach to convert single gang, non-GFCI outdoor outlet to two GFCI outlets on two new circuits?
3
No power after replacing GFCI outlet
5
Safe breakout for an RV outlet