I am a renter, so I cannot change the locks or drill an additional deadbolt. I came across August Smart Lock today (https://www.amazon.com/August-Smart-Lock-Pro-generation/dp/B0765LFNM7), which sits on top of the handle of the existing deadbolt. I don't need (or want) any smart functionality, however, a device to lock the existing deadbolt from being turned with a key would be ideal.

Are there any purpose-built solutions for this? If not, any other contraptions I could build?

I don't think that gadget does that. It certainly will allow you to override with an actual key.

Anyway, the thing you are looking for is a gadget that secures your door absolutely from the inside so nobody can unlock it. That is not what a deadbolt does. Deadbolts are designed to do that and also let people with keys through - that is the entire point of a "key-based" security system.

Now, either you have a seriously misplaced expectation of how door locks are supposed to work... or you have some sort of unique, special security problem that makes keys ineffective. The answer to the second problem is "Try not to allow that to happen, and fix it immediately when it does."

That means if you lose control of your keys, change the keys ASAP so that the random or hostile person's keys no longer work.

Now you say you have a landlord. It really sounds like you're trying to homebrew this without getting the landlord involved. That's a mistake. First, you have a legal obligation to tell him you lost control of a key. Second, he is just as interested in the apartment's security as you are, because someone hostile to you is a direct threat to the apartment - the landlord fears kicked out drywall, smashed pipes to cause flooding, stolen appliances -- an angry guy can do a lot of damage to an apartment, way more than your deposit will ever cover. And that's on the landlord! (Well the bully will do it because it's on you legally, but landlords generally assume you'll be uncollectable.)

So get your landlord "in the loop" here.

This image is of a commercial product that you can buy cheaply, but you can make something on your own that performs the same task if you want. Basically, you can wrap a strap around the thumb turn of the deadbolt and tie that strap to your door knob: 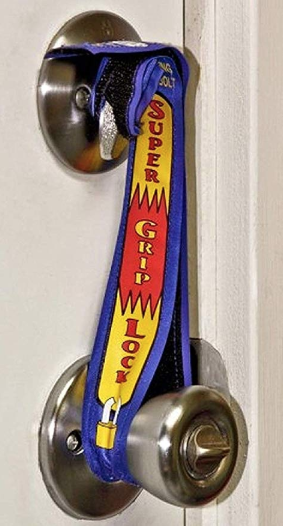 The strap has a big mechanical advantage over the small amount of torque a key can apply so they are pretty effective.

2
Installing a deadbolt on a door with a circular hole for the deadbolt location?
1
Replacing deadbolt
1
Back door suddenly won't close
0
How to fix deadbolt lever that doesn't lock or unlock the deadbolt