How should I frame in a large window opening to install a smaller window?

I'm replacing some windows in my house. The original window openings were outsized for the rooms, so the replacement windows I've chosen are smaller, which means framing in the part of the opening that I won't be using.

The first window that I'll be replacing was off-center in the wall, so I'll be installing the new window to one side of the opening so that it will be closer to the wall's center. As I see it, I need to create two pieces of framing -- one for the side of the window and one for underneath (I think a single L-shaped piece would be structurally weaker). There are two ways that I could build these pieces: one where the side piece fills the opening vertically with the bottom piece at its side (Figure 1); the other where the bottom piece fills the opening horizontally with the side piece and window resting on top (Figure 2). 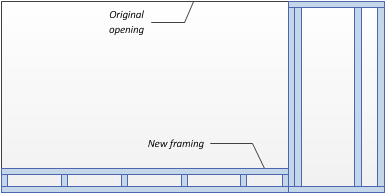 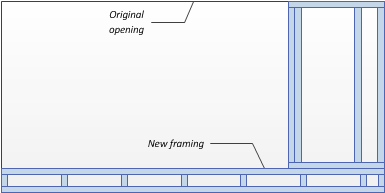 Have I considered all the options for how to build the new framing, and is there an advantage for one method over the other?

If you were framing this opening from the start, figure 1 is the way it would be done. I would go that direction so it will make sense to anyone working in this area of your home in the future.

Did you consider the possibility of centering the new window horizontally in the existing opening? That may result in a better proportion. In that case I would still use the approach in figure 1 with new vertical sections on both sides extending the entire height of the opening.

I would suggest you use the method in figure 1. It is conventional, easier and uses less material.

I would use fig. 1. It would give the wall more strength on the side(s). When the new window is installed, it will be a more steady installation for the siding on the outside.

Not the answer you're looking for? Browse other questions tagged windows framing replacement or ask your own question.

4
How do I build a square window frame in an off-square opening?
4
Should I replace the window frame while installing replacement windows?
2
What can I do about out of square rough opening for new windows?
1
Should I install a normal window or glass block?
1
How to frame around an egress window