Can i use step-up transformer to transform 110v to 220v for my window AC?

Suppose you did. The unit is labeled for 2500 watts, which means that is how much power you must provision.

If you've heard of an 80% derate, that's the very same thing we just did (inverted) so we don't need to derate further.

3219 watts is 26.8 amps. That's too much for a 20A or 25A breaker. A 30A breaker is required. For that, your circuit requires 10 AWG copper or 8 AWG aluminum wire. You will need to run this as a new circuit because I guarantee you won't find this in your existing wall. And don't even think about overloading a 12 AWG or 14 AWG circuit at 26.8 amps!!!

Or, change the whole circuit to 240V

Turn the breaker in question off and then stick a lamp in every receptacle and see what lost power. Two questions.

If both answers are "yes", then you can convert the entire circuit to 240V, and change Every Single Plug to NEMA 6-15. Obviously 120V things won't plug in there anymore, but that's a good thing! That prevents you from setting your 120V appliances on fire. 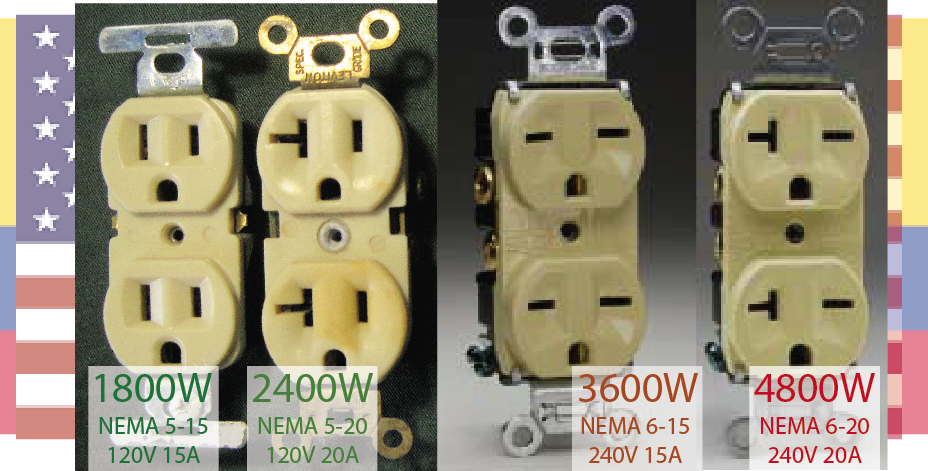 A few appliances are capable of working on multiple voltages. Look at their power supply rating to see if they say something like "100-240V" or "90-264V" (that's 100-240V +-10%). For those appliances, you'll need to change the plug to NEMA 6-15P. Are you daring to think the thought? Don't do it! DON'T leave a NEMA 5 receptacle on a 240V circuit merely so you can plug in dual-voltage devices. That's how you burn houses down. The right way is install the proper NEMA 6 in the wall, then change the appliance cord. Worst case, use a cheater cable. Because then, it's obvious that it's a cheater cable.

No, you can't do that in this case UNLESS...

Note that the AC requires 240V @ 15A. Assuming perfect conversion with the transformer (not reality but it doesn't matter here) that means you need a 120V @ 30A outlet. While these are possible, chances are you don't have this. It's most likely a 15A or 20A circuit either of which will be inadequate for the AC load.

Instead, consider a new 240V circuit for your A/C. (Contact an electrician if you are not up to speed doing electrical work.)

Just to elaborate on transformer theory. These are PASSIVE devices. All they do is convert one voltage to another. The POWER, which is VOLTS * AMPS remains constant. So if you double the voltage you halve the current and vice-versa.

As others have detailed, powering a 240v AC unit in your room isn't practical. Possible but at high expense or losing regular outlets in that room.

Stick with a 120v AC unit. It may not be as powerful as you want, but it'll be more cost effective.

2
How should I wire my pool heat pump?
0
How to connect a 230V jointer to a pre 1996 dryer circuit?
0
Circuit breakers in "ordinary" boxes
0
How can I remove a 240V heater to make 110V outlet
4
Can I run THHN for separate washer and dryer circuits through the same conduit?
0
Convert 220v dedicated oven connection to 110v receptacle?
14
Is it safe to swap a 30A "Dryer Socket" with a 40A "Range Socket" if the breaker is 40A?
1
Can my panel support a 60A circuit for EV charging?
1
What type of cable to use for a low voltage heating element?