Connect neutrals together in 3-gang box (load side) with 3x 3-way switches?

I have wired them together and I'm just connecting the switches now. I have:

My question is: should I splice the neutrals together (and the grounds) at the second 3-gang box (load side)? It seems like it doesn't matter, since they could just as well be going to 3x 1-gang boxes on the load side in which case they would NOT be connected.

Is there a standard way to do it?

If you have an electrical box at the second switch bank location with enough cubic inch volume you should really keep each circuit separate (i.e. not inter tie the neutrals). The primary reason is that you want the current in the hot line (in this case the travellers) and the neutral of each cable to be the same.

Another good reason for that would be that at some time in the future it may be desirable to bring an alternate power feed to the first switch bank location to feed one lighting circuit separately. You do not want to intermix the neutrals from two separate circuits.

Neutral is the normal path of current return. Ground is an emergency path, only used if something is seriously wrong (in lieu of sending power through a human, and it helps to get breaker to trip). Because of that, it's OK to spiderweb all grounds to each other. This should never be done with neutral.

Because AC current in wires causes AC magnetism, and the wires' magnetism must cancel each other out. If it doesn't, it will cause eddy current heating, and noise/vibration leading to fatigue, breakage and arcing, both of which can start fires.

It's a lot to sort out. Mark the wires.

They sell 5-packs of colored electrical tape for about $5 at the hardware store. Typically blue red yellow green white. 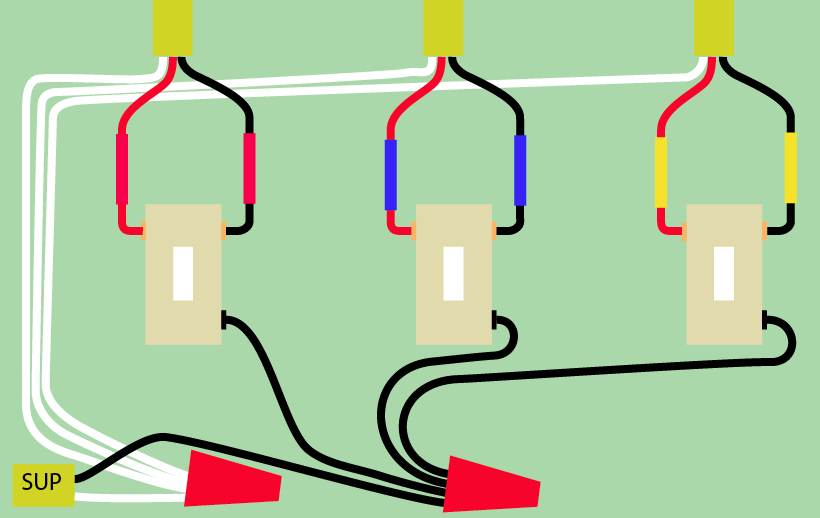 and this in box 2 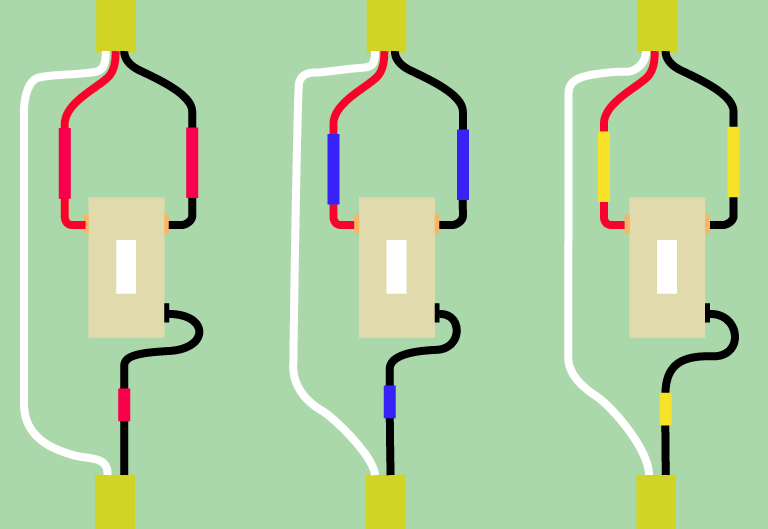 *The neutrals will be a wire from each cable that need be wire-nutted; I simply didn't bother drawing the wire nuts.

Note how the 2 travelers are color coded the same. That is because there is no need to distinguish travelers from each other.

I also spiraled the travelers' markings quite some distance, but the switched-hot only the width of the tape.

Now that looks super clear on the drawing, however in the box, things may be so confusing you need to mark the neutrals too. But you cannot use red, yellow or blue (hot colors) on a neutral wire, or you will inadvertently redefine it as a "hot" wire, which is wrong. White, gray and green don't have that problem. They won't redefine a hot because you're not allowed to redefine a hot to a neutral or ground. White and gray are neutral colors, and green won't redefine a neutral to ground, because that's not allowed either. So brace for an argument with the inspector, but I say using white, gray or green on both hot and neutral does not change the purpose of the wire, therefore is only marking for identification.

One of the great advantages of the conduit systems used for industrial and institutional wiring is the ability to wrangle complex wire runs like the situation between your two switch boxes without having to worry about mixing up wire colors, retagging wires, or splitting neutrals up on the same circuit. However, typical metal conduit is expensive and requires special tools and skills to install, so it's not used in residential wiring unless called for by local Code provisions or the need to run wiring in unfinished areas.

Still, this does not mean we cannot take advantage of conduit's pros here. One relatively little known fact is that ENT ("smurf tube") is legal to use for mains wiring, not just telecom/datacom work. A 1/2" ENT can be run and fished with little difficulty compared to a bundle of NM cables, and then you can pull individual stranded THHN wires through it, giving you the ability to put in exactly the wires you need without much more cost or work over having to wrangle 3 different NM cables with the perils of duplicate neutrals and crossed travelers that entails.

In your case, I would take that 1/2" ENT and run in it a 14AWG bare ground, a 14AWG white neutral, and 3 14AWG traveler pairs, with both travelers in each pair the same color, which can be any color other than white, grey, or green. (For instance, you could use two wires each in yellow, blue, and pink.)