So I’m trying to replace my old light switches with some nice new dimmers but I have a problem. As you can see in the picture, all the ground wires run up and out of the box to an unknown location. Really unsure of how to proceed. Any help would be much appreciated.

Update: After some finagling I got the bundle of grounds out or the hole(see picture below) but now I have found that the 2 dimmers I have won’t even fit in the receptacle together. It is not a metal box it looks like some kind of fiber product, probably asbestos knowing my luck. It says CU. IN. 24 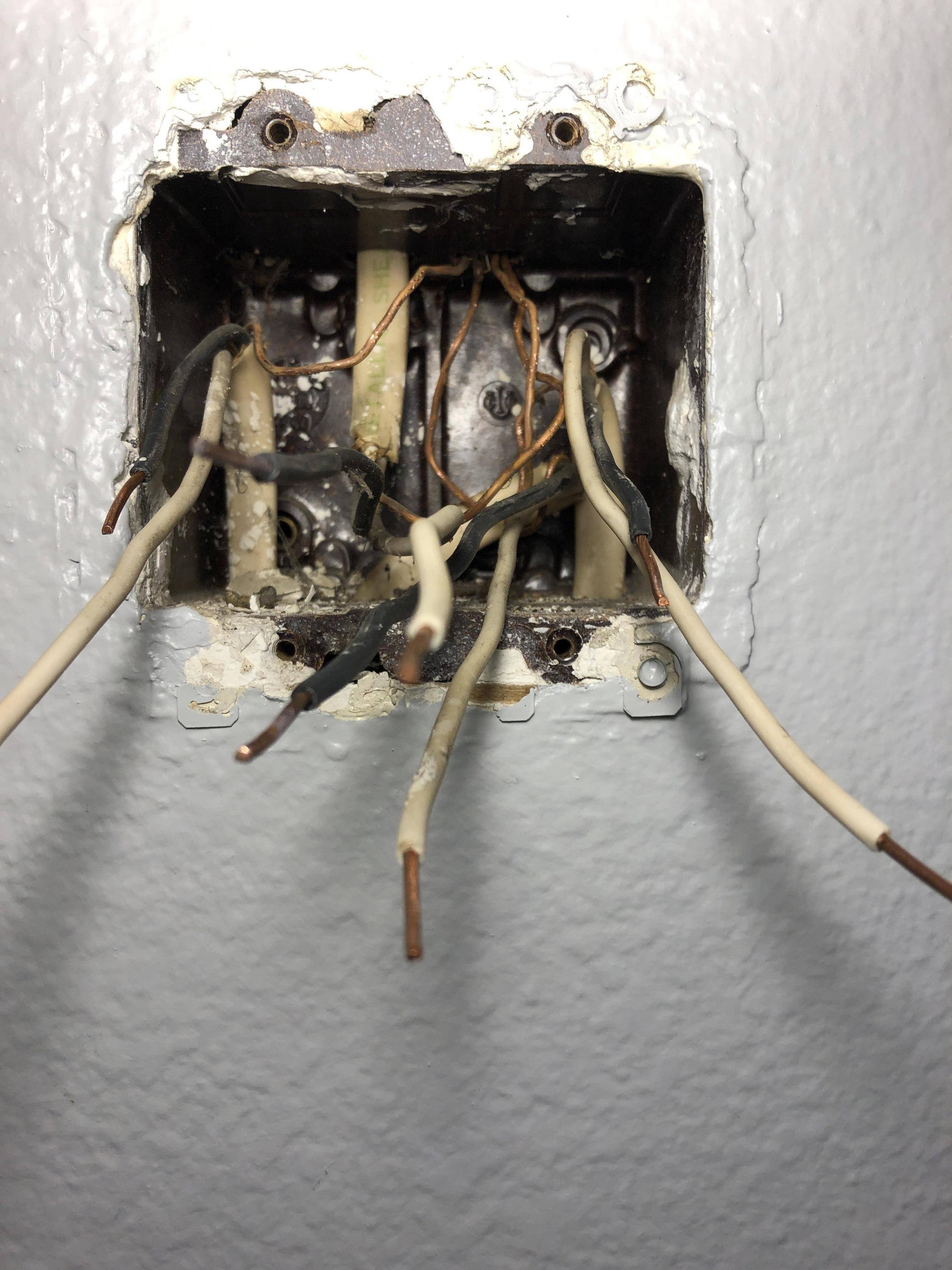 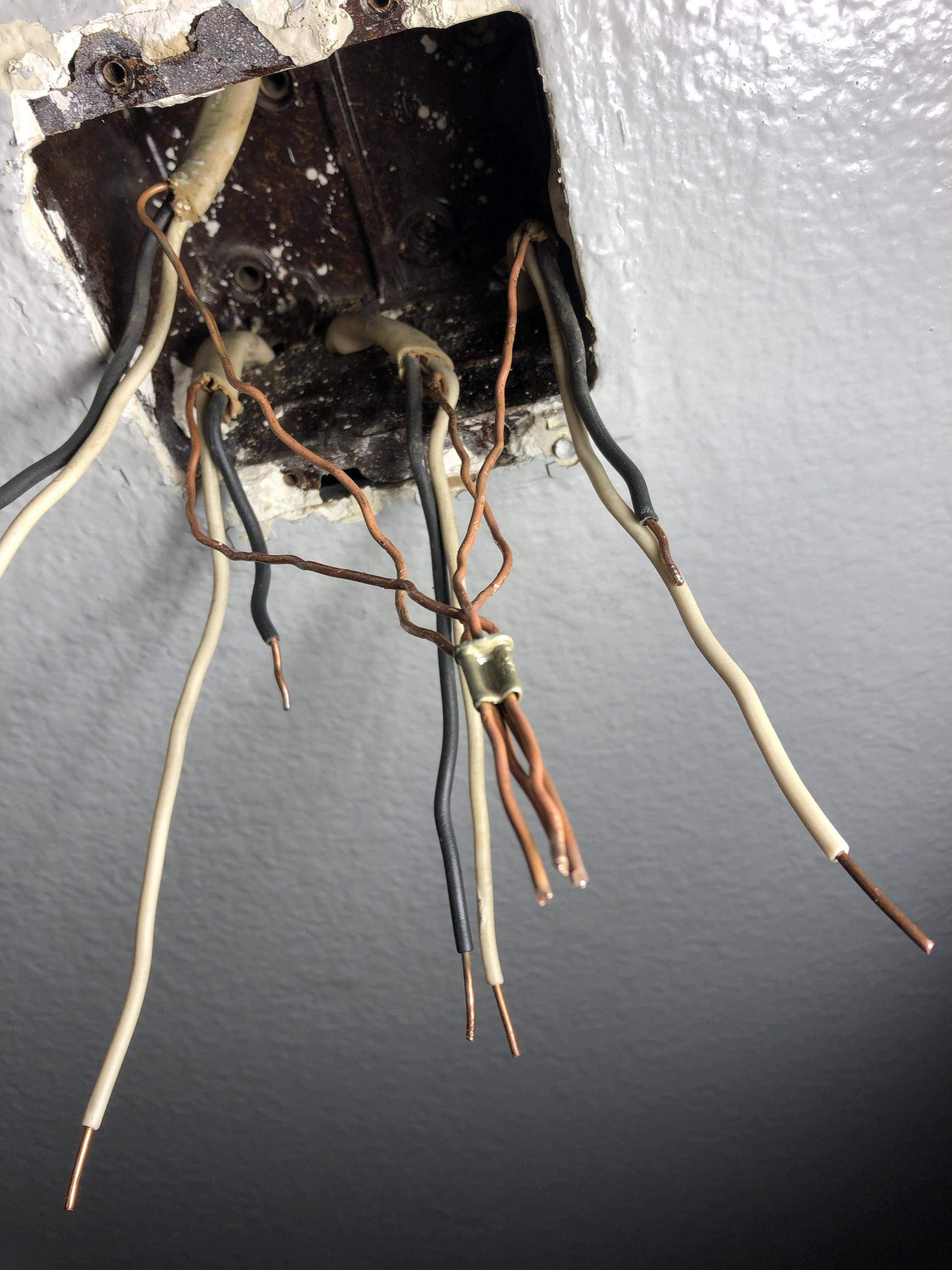 The cure for this is a surface conduit starter box. This box will sit on top of the existing box about 1-1/4" proud of the wall. It will provide both the statutory cubic inches you need for all those wires and yokes, and the practical cubic inches for your dimmers.

Normally it's intended that you then use its sides as a launch point for surface conduit, but if you don't do that, I won't tell :)

Now, I can't guess what's going on with all those black and white wires. I surely hope you can. Normally I expect to see some of them be wire-nutted to each other, and this positional data is very important. Usually the only evidence that tells you which wire does what is how they are connected in the box. I gather two of the blacks are switched hots, and the other two are supply and onward, which need to be connected together obviously.

With those ground wires, I would tuck 3 of them back, and send the fourth into a wire-nut to meet the pigtails from each switch.

Now as far as cubic inches statutorially, you need to count the wires and the "wires".

If you want flush mount, you must replace the junction box in the wall. What you want is a 4-11/16" square box with a 2-gang mud ring of appropriate depth. This will be bigger than your normal box, but will undoubtedly fit the two large dimmers. You can try getting it done with a 4x4" square box with a 2-gang mud ring, and this will fit in the footprint of the existing box... but it could be a tight fit.

There's another problem here, which is the box is too full. I generally like to keep boxes even less crowded than allowed by code-it just makes the work easier and faster as well as safer. If you look carefully at the back of that box, it may have the cu in marked, or even the capacity in how many wires of what gauge, but there's a formula that counts how many wires terminate in the box, how many devices in the box, what gauge, etc. "Wiring Simplified" (WS) is a great, brief but complete reference, easily worth the $8 it will cost you.

I count 8 wires that look like #12, plus the ground wires, which each need 2.25 cu in. That's 20.25 cu in. Each single gang device yoke (regardless of the ampere rating of the device) counts as two conductor volumes, based on the largest conductor that terminates on the device. so with two switches, the minimal box volume is 13 x 2.25= 29.25 .

A box extension of various sorts would do the job. As other commenter noted, a conduit initiator extension would do it, or there are also exterior box extensions which are similar. The alternative is removing the box and replacing it with a bigger one, which may require a bigger hole in your wall.

And besides that, all the grounds head out of the box to some secret vacation spot. Have you found buried boxes or connections not in a box in your house? If so, get ready to redo lots of old work. Current code, if I understand it, require grounds to be connected with a wire nut or other specific connector, not just a crimp ring.

IMHO, you probably want to pull the box so you can see where everything goes, and if you do the calculation I'll bet you find they should have used a bigger box anyway. Think of it this way- you get to find out what's inside your walls!

WS will give you the essentials of electrical code, which is just physics married to common sense. In this case the relevant principles of the code are:

Not the answer you're looking for? Browse other questions tagged electrical dimmer-switch ground or ask your own question.

6
How do I wire these dimmer switches? The current wiring is crazy
4
How can I wire 3 Lutron Caseta dimmer switches in bathroom?
0
Hot line creating circuit with ground
0
Switching to three-prong outlets where ground wire is present
1
Hallway Smart Switch help
1
How do I connect light fixture’s ground to supply wires?
1
Wiring a fan to a 3 wire switch off wiring question
2
What is a safe way to ground this light fixture?
2
A regular switch+dimmer switch combo for several lights
5
Can I connect the neutral wire ends via a single switch terminal (without a pigtail)?