Where should I connect my modem in this ethernet junction box?

I am trying to figure out where I would attach the Ethernet cable from my modem to distribute to rest of the house. I'm assuming the blue is the data cable and white is phone but there are two sets of white with one set having 4 wires (phone?) and one set to the left having 8 wires (data?) But why 2 data cables?

I think I would run a cable from the modem to the bottom junction box where it is labeled "from source"??? Not sure how to connect it without tools. Does it require a special tool? 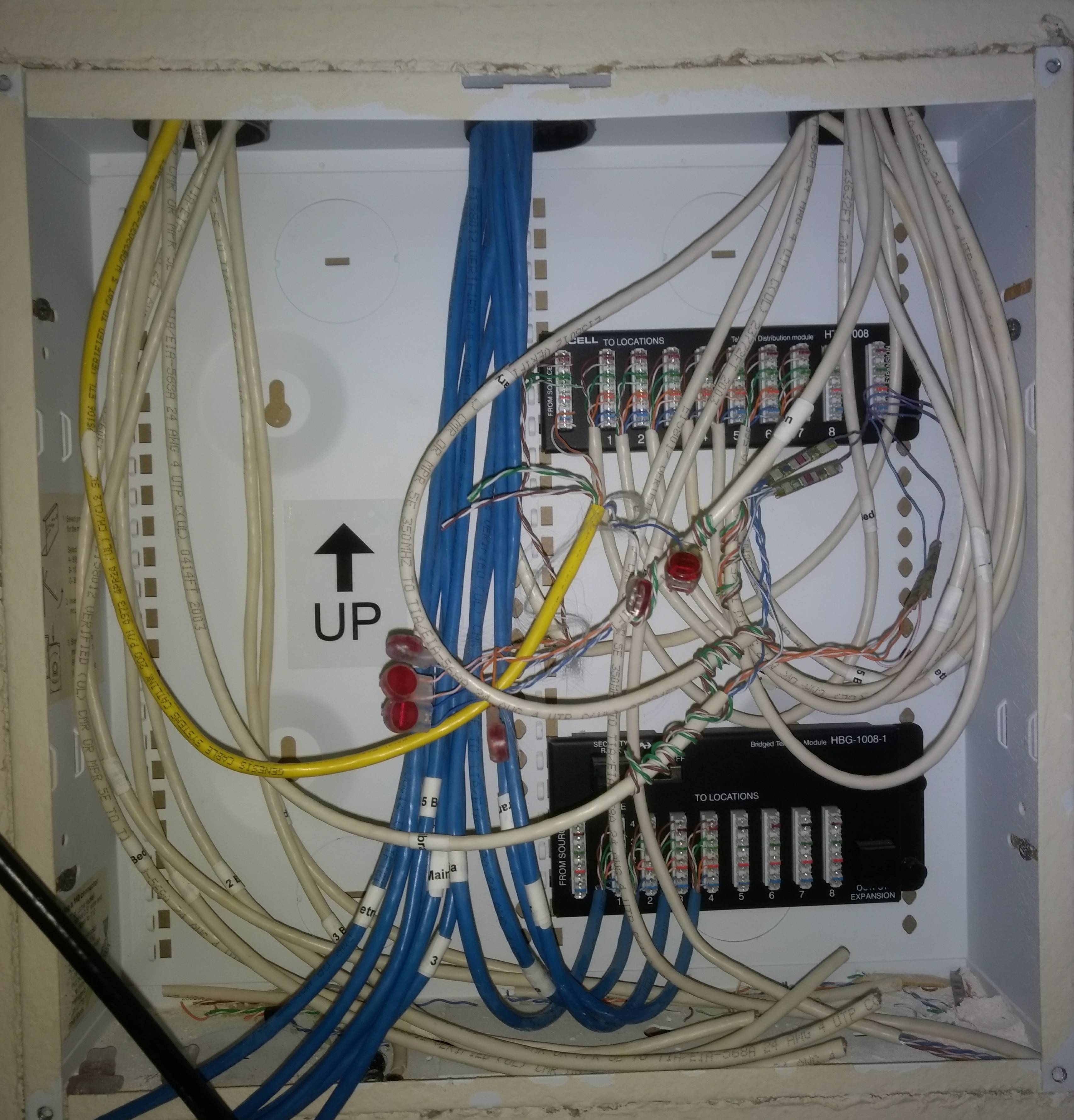 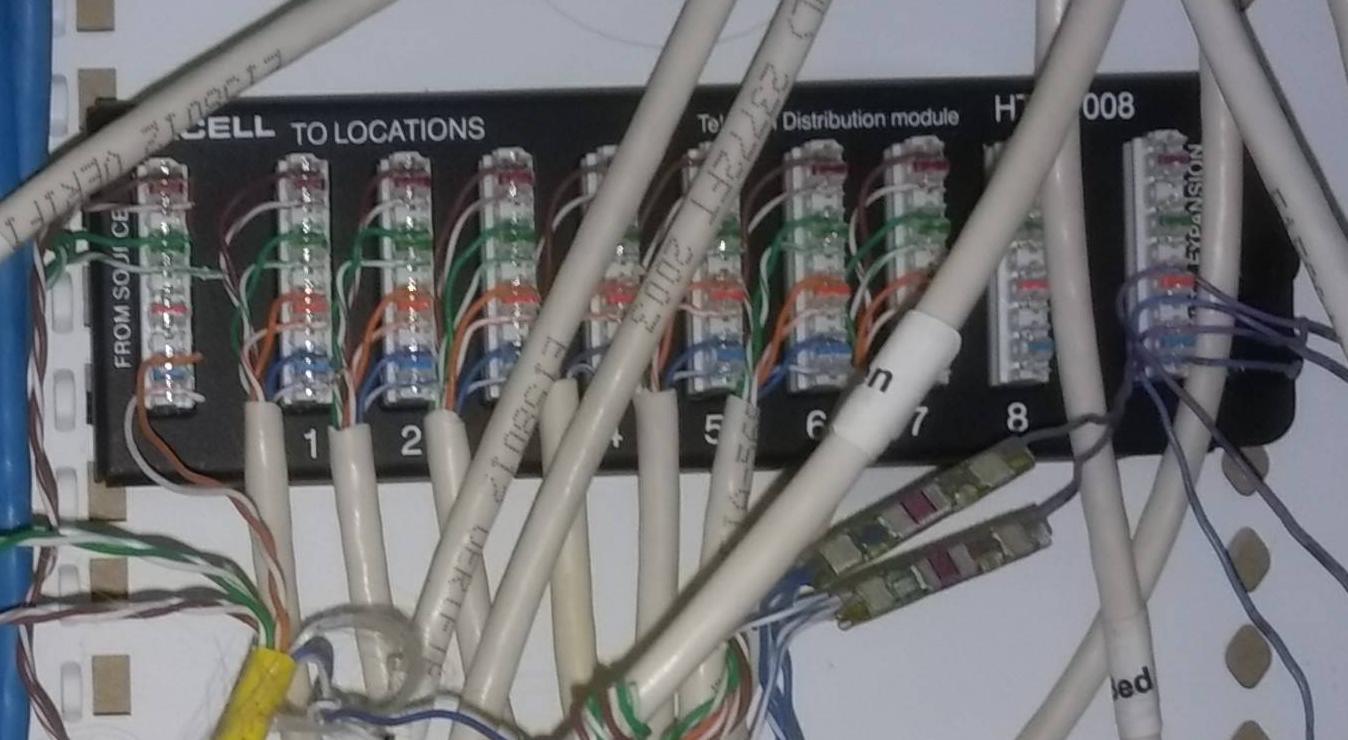 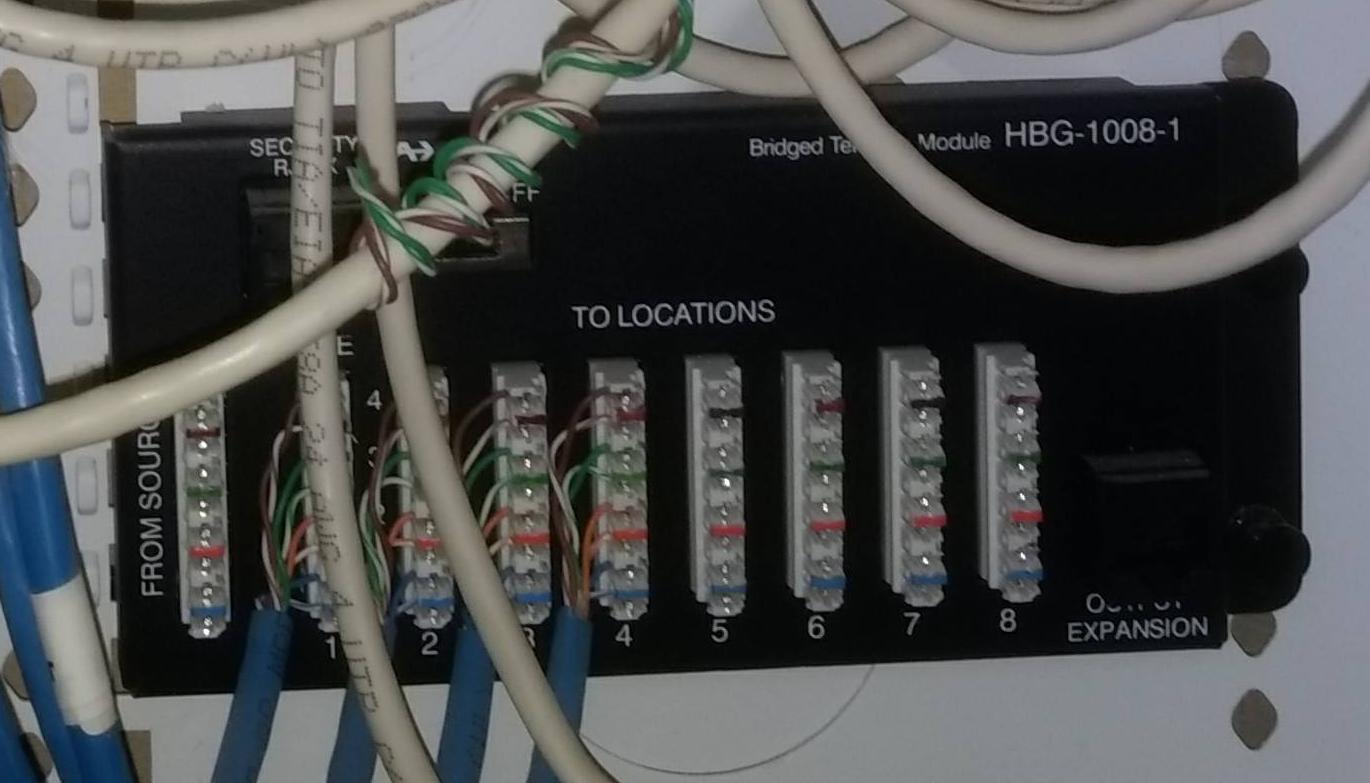 You can't use those black boxes. They are for distributing telephone lines, not Ethernet.

You have two options.

The second is to buy a small patch panel rated for Cat5e. A patch panel looks similar to those black boxes you have now, except that next to each place where the blue cable is connected, there is an RJ45 jack. You'll need a punch tool for this. Some panels or bags of jacks come with a small plastic punch tool which works just fine, but it takes a bit of extra work.

Once you have completed either of the above, you can then connect the cables or the patch panel to your modem or a small Ethernet switch.

That's not an Ethernet hub

This is for landline telephone. And they did a bodge job of it. See the "To Expansion" block on the right side of the first one? That's supposed to go to the "From Source" block on the left side of the second one. Then you're supposed to use the 8 remaining positions on each block to punch down up to sixteen (!!) outlets for telephone. They just used traditional phone wiring splices, which is exceptionally dull of them since the punchdown blocks are designed to save them time. Facepalm... By the way those blocks are about $20 each.

However, the good news is that you have the right cables in the walls. All these cables appear to be labeled "Cat 5E" which is adequate for Ethernet.

If you want Ethernet, you'll need to get an appropriate Ethernet hub or switch here, which is a completely different thing. Network hubs take power. I don't see any mains AC power in this box. Trying to bring mains power into a box like this opens a big can of worms. So you are better off using Power Over Ethernet (PoE) to deliver power to your hub or switch. You'd want a hub that is itself powered by PoE, however that is hard to find in the sea of hubs designed to plug in and deliver PoE to other devices, and you don't want that. So you can use a "PoE Splitter" inside this box, which extracts PoE from the ethernet cable and delivers the usual 12V plug to power a normal/common Ethernet hub or switch. Choose one that is low power draw (under 2 amps at 12V), so this remains feasible.

To power this, find a location in your house where a power socket and Ethernet are close to each other, and where it won't be objectionable to have a cable draped between them, and then fit a PoE injector there.

Terminate the wire ends with RJ45 (but don't)

Imagine every cable had an RJ45 plug on it. At that point, you could either plug it into a slightly different telephone hub, like this one here that's a brother to the ones you have... or you could plug it into an Ethernet switch. You could change any outlet in the house from phone to Ethernet simply by moving the cable from the phone junction block to the Ethernet switch. Easy Peasy.

I want to pause to get you to understand that solution. Ethernet plugs on the end of each cable, plug it into the above-thing or an ethernet switch. Got it?

OK, except that's not quite the best practice, because Ethernet plugs crimped onto cables are not reliable. Instead, you bring your raw cables down to a patch panel. On the backside of the patch panel is punchdowns just like you see in your existing splice modules. On the front side is RJ45 sockets. Each punchdown goes to 1 socket, and that's it. In other words, this does exactly the same thing as putting RJ45 plugs on the cable, except they are sockets instead**. It's nothing more than that.

Because this gets very confusing - you have a whole bunch of equipment - patch panels, telecom modules and Ethernet switches - all of them black and covered with RJ45 sockets. You just have to know the patch panels are the simply ends of your cables, i.e. the "other end" of those Ethernet/phone ports all over your house.

Then, from there, you use short (1-2 foot) Ethernet cords to patch from whichever port you're lighting up, to the Ethernet switch or telecom hub.

Whew. The hard way to do a simple thing, but a) much more reliable, and b) anyone who works in networking will instantly recognize a competent patch panel installation and know what to do with it.

I've worked at a software developer that had fewer Ethernet cables in their punchdown cabinet than your house. Times have changed.

3
Finding the other end of an ethernet cable that's punched into a 66 Block
3
How can I use the existing structured wiring panel to get internet throughout my house?
1
Ethernet Cables and Coax Cables running outside house? How to Modify to Home Distribution Panel
3
Re-wire Cat5e RJ11 jacks to RJ45 ethernet
2
Wiring ethernet cable from AT&T fiber Modem to a specific room
2
Can I repurpose this RJ45 setup for phone to run as Ethernet?
0
Extending internet signal to all outlets
0
What's the intended usage scenario of the Cat5e runs in my new house?
0
Where should I (not) place POE ethernet outlets?