I have this 900-lb air compressor on a wooden base I built. At the time I built it, I was able to move it around using a pallet jack. But now it's in a room that's too small to accommodate the pallet jack, and I'm looking for another way to maneuver it into position. 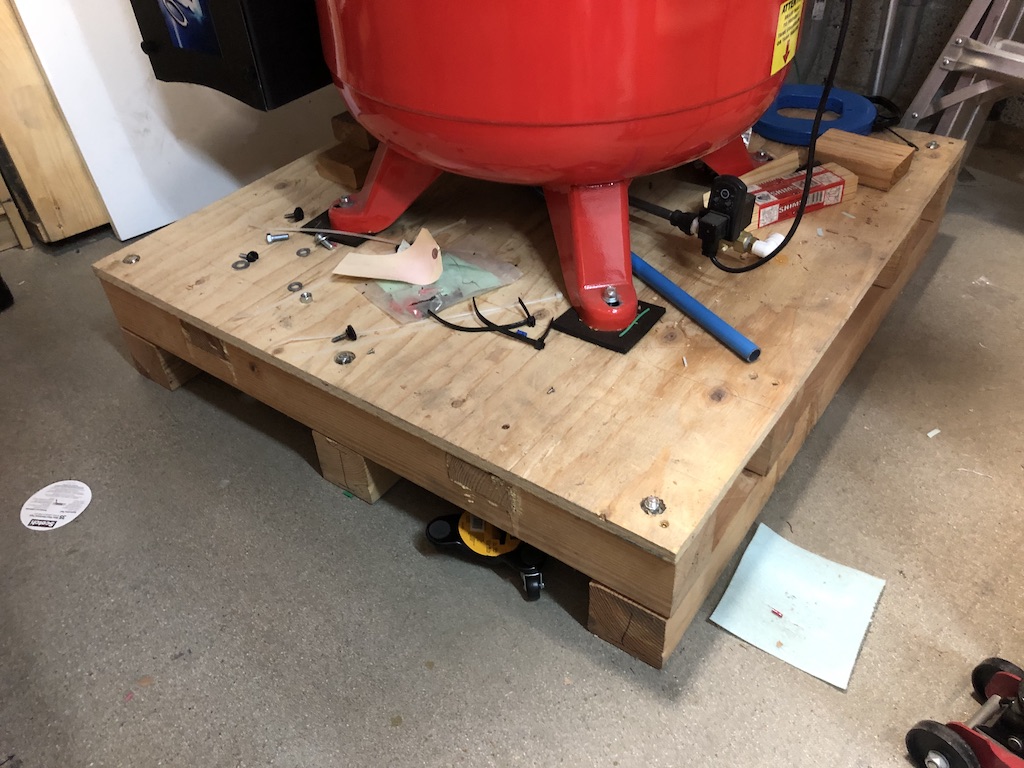 An ideal solution would be a heavy-duty adjustable caster I could side-mount to the platform. I imagine something with a long, threaded stem and a hex head, and a beefy bracket that can accommodate lag screws into the side of this base. Then I could just use a wrench to lower them (thereby raising the platform), push it into position, then raise them back up to lower the compressor. But after an hour of googling, I haven't found anything sufficiently sturdy to do the job.

In the photo you can just make out these three-wheeled dollies. I was going to try to jack it up onto those. They're only rated for 200 lb each, but I'm hoping they'll last long enough to let me put it in position.

Beyond that, what suggestions do you fine folks have?

(P.S.—I had a really hard time finding a tag for this post.)

I found something called a jacking caster. These are awfully expensive, but it's more-or-less what I was imagining.

Better answer from fred_dot_u, but if you wanted to blow the budget, you can get side mount trailer jacks with wheels. The downside is that they mount high, so you'd have to add (probably) a couple of 4x4s underneath or fab some fancy brackets.

Alternate, also budget unfriendly: Jessem alts caster set. ***Edit, just got info from Jessem, they said they don't know a max load rating, but have only tested to 75#/wheel, so this seems unsuitable...

Alternate-alternate, budget friendly but hard work: get ~10" of air under the pallet (a bit of height at a time... stack wood underneath... go to the other side... stack... repeat) and attach regular casters.

What about thinking above instead of to the side? Attach the large casters to a hefty beam that extends wider than the base. The casters would have to be taller than the current top of the base, or spacers added to the beam to make it thus.

The beam then hovers above the base, one beam per side, with long bolts, perhaps lag bolts extending through the beam. As you tighten the bolts into the base, it is lifted from the floor.

This is a suggestion for a temporary transport, although it could be modified or left as-is for permanent movement options.

EDIT: The reference to ten inches of air brought to my alleged mind a product known as an airbag lift: Amazon link to airbag lift

The text references five hundred pound capacity (per bag) and a 3/32" thickness. You'd have to use a bar to get that space in there, but it's less than an eighth of an inch and certainly doable. Three inch lift capacity means you might have to step-lift your pallet, but you'd eventually get sufficient height to attach ordinary casters within your existing footprint. US$28 isn't particularly expensive. 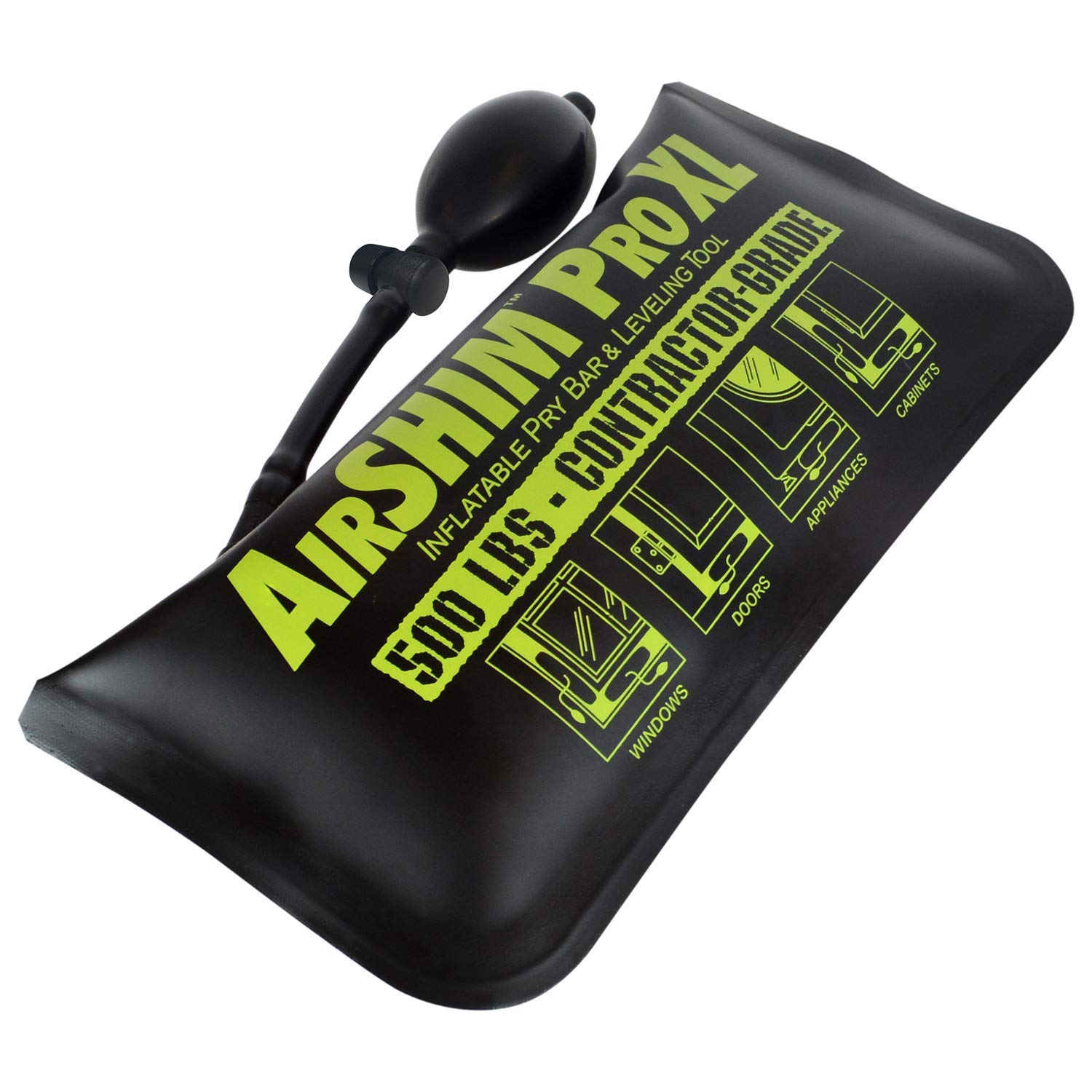 The wooden base is awesome. But you're making this harder than it is.

Then, you either use lag screws, bolt-and-nut, or lag studs into the wood. One high one, and 2-3 lower ones. The lower holes should be slotted a bit.

Then you install at an angle and tighten up the bolts/screws. Voilà. 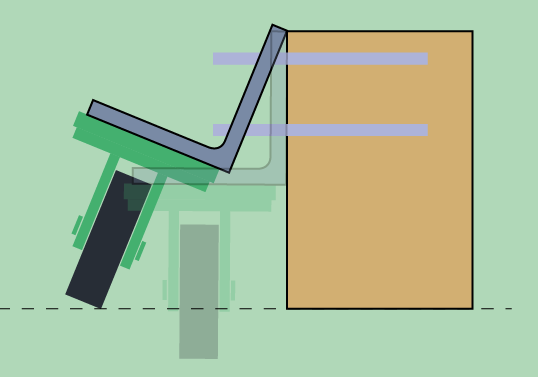 I would have suggested jacking up the unit an inch or two to install the casters, but I presume you have already excluded that.

These Workbench casters from Rockler are what you need. 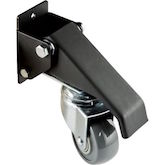 They allow you to have the unit on the ground until you need to move it, and then use your foot to push down on the caster to lower the wheel/raise the unit so it can be moved.

Not the answer you're looking for? Browse other questions tagged hardware or ask your own question.