We've been having heavy rains in Madison, Wisconsin, lately, and on two occasions I've found water seeping into my basement in this location: 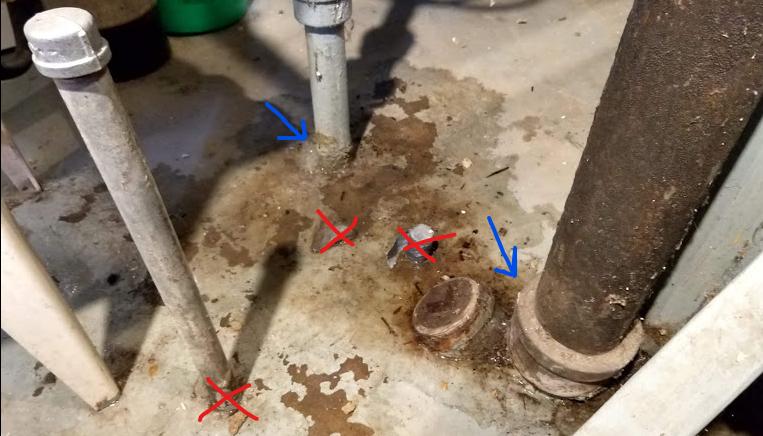 The water is clear and doesn't smell, and we weren't using much water the two times I discovered the leak (so I don't believe it's coming back up from the house drains).

It seems like water pressure from the drenched soil is forcing rain water through the penetrations where these drain lines go through the basement floor.

The house is 100 years old. The basement is poured concrete (including walls) and there is no sump pit or drain. It's a shallow basement (about 4' deep).

Is there a reliable way to seal around these drain lines to keep this from happening in the future?

1. Some water might be tolerable in a minimally finished old basement.

In St Louis, a lot of houses would sometimes get some water in the basement. Some of them a fair bit. If this is going to destroy the berber rug in your man cave that is one thing. If it is going to make a small puddle that is another.

If a little water entering the basement of your old house is not going to cause trouble, you could watch for it and mop it up. You could seal the concrete floor of your basement. You could set up a dehumidifier over a drain.

2. You might be able to figure out why the water is coming in.

When it is raining hard, go out and walk around (like the manly Midwestern homeowner you are) and see how the drainage is. Is it pouring past a loose gutter? Have misguided yard rehab efforts caused a change in drainage? If you can see where water is getting up against the house, that might be where the water is tracking down, under, and then up thru the weak point by the pipe. I actually figured out about the St Louis house gutter because of a spot by the house that was all sandy with no vegetation. It had been scoured clean by the water coming past the gutter during hard rain. I was suspicious and then confirmed it with a walk in the rain.

I like the pipe photo and pipe stories, by the way. Old houses are cool.

Not the answer you're looking for? Browse other questions tagged basement leak waterproofing or ask your own question.

4
How much water is too much water underneath the basement concrete?
3
How do I prevent water from leaking into my basement?
0
Water seeping through stained concrete in slab foundation - during heavy rain only
4
Sewer odor from basement floor drain
1
basement sump pump water level above drain tile
1
Unidentified pipe and smelly water trickling under slab into basement floor drain
3
Water dripping from basement ceiling during heavy rain
1
What is this pipe in my basement?
1
Should I dig a hole to pump water from under basement?