edit: my response to harper: 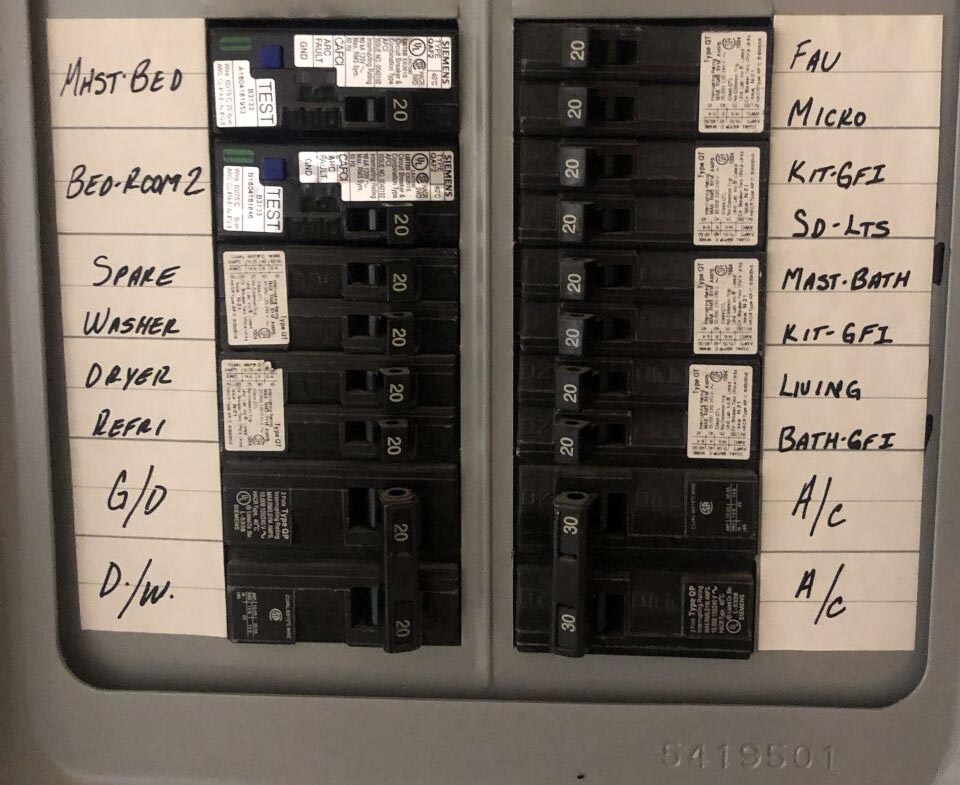 4: “Do they tend to get notably brighter and dimmer as other loads switch on/off?”

6: “Hit a library and browse their section on "electrical how-to books"”

7: “You will NOT do any repairs in this apartment.”

8: “Turn all the breakers on and all the light switches off. Plug something (doesn't matter) into every single socket (try both sockets in the double sockets). Are any of them dead? If they are, try turning light switches on. Do they come back?”

9: “Find every GFCI receptacle or deadfront in the place. For each one, hit "TEST". Search to see if any other receptacles, lights or devices lose power. Then hit "Reset". Don't bother with GFCI breakers.”

edit: my response to sunnyskyguy ee75

1: i added the breaker pics above

2: here's the map, but i can't get into my roomie's bed room and bath room 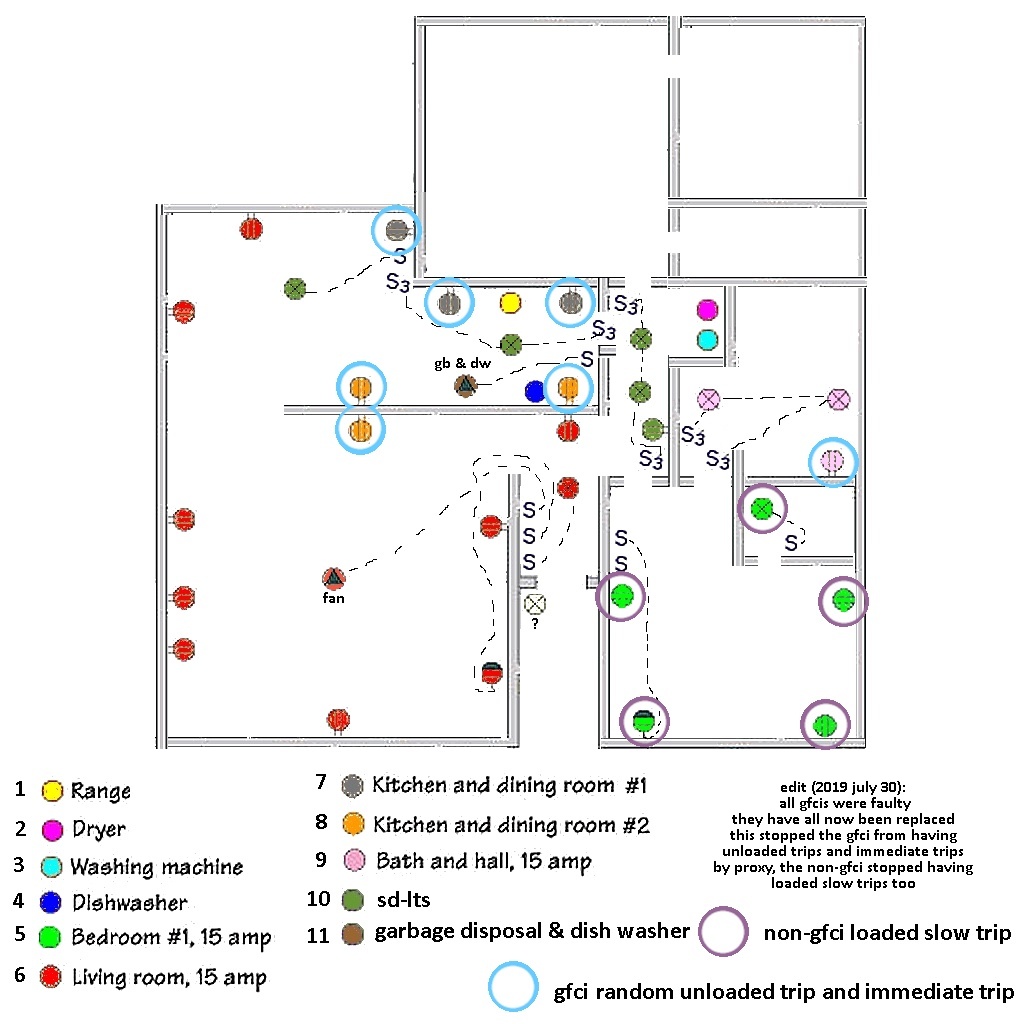 3: “Crosstalk on upper floor music from switch events can be EMI related to contact arc noise triggering something.”

edit: my 2nd response to harper:

This problem requires some iteration. That's why it's all on you - you're the only one who's around enough to bear with the needed testing. But your technique so far has been ineffective.

Focus on this particular data collection:

EDIT: OK. That thing you shot a picture of is your breaker panel. It's perfectly clear this is a normal and modern breaker panel, nothing wrong with it, you're just not familiar with the tech. Now, I prefer cutesy names like "Thor" and "Hawkeye", but I see your panel already has unique names for each breaker... just change the two KIT-GFI ones to KIT-GFI1 and KIT-GFI2.

Now it's time to map all the outlets in your house.

Very similar to what Sunnyskyguy is proposing, except I want you to also mark the outlets using stickers. Why? You'll see. An outlet is anything that takes electricity, so this includes your dishwasher, switched lights, A/C unit, all of it.

Now if all this went right, every outlet will have exactly one sticker. If it has 2 stickers, then fact-check that! Turn everything off again, and test that outlet with only that breaker on, and only the other breaker on. If 2 breakers can turn it on, that is a very important fact, and the electrician needs to be told.

By law, on a newer installation like this, these breakers must feed only your apartment. However from the "music" you reported earlier, it might be feeding another apartment. Now you know what each circuit breaker does, I want you keep breakers turned off, except when you actually need what's on them. The goal here is to get the neighbor to report a power outage, and have the electrician come and fix it (so it's on their power instead of yours).

This is bad because a) you're paying for it, b) If they overload the power, your breaker trips and that's making it hard to understand your electrical... and c) once they figure out they're getting free power, they'll exploit it at your expense.

If you get a knock on the door and the electrician wants to turn the circuit on, fine, let him troubleshoot. But turn it off that evening (unless you need it).

Glad to hear you don't have any double-fed circuits. That can cause a lot of problems and you can now exclude it for good. This whole exercise is giving us a lot more confidence in the wiring, which doesn't sound so bad.

The A/C requiring 2 circuits is normal, I probably should've warned you of that :) The 120V circuit provides fan and 24V furnace and thermostat controls: the devices that call for A/C. The large 240V circuit runs the A/C compressor proper.

The mismarked circuits you exchanged are amusing. Given their destinations (right next to each other) and locations in the panel, I would expect they are multi-wire branch circuits. I won't discuss those any further because they are a Big Bag of Not Your Problem; the important thing is they appear to be correct, and that reasonably explains the mis-marking, and it's a trivial problem. If a problem were present here, then running microwave or dryer would trip the GFCI instantly, everytime.

All appliances tripping all GFCIs can only mean one of two things: a) all the circuits have wiring problems or defective GFCIs; or b) all the appliances are broken. Both of those are highly improbable. I would take the appliances to a friend's house or your workplace and try them there. If they pass there, I for one don't believe in failed GFCIs, so that suggests some sort of persistent wiring problem in triple failure. That was considered highly improbable until Eastern Airlines Flight 855 nearly did a splash landing because all three oil-pan magnets were installed without the required O-rings... And now airplanes have ETOPS stenciled on them to forbid the same mechanic to work on both engines...

As for your bedroom AFCI trips, we still need to know if this is an overload from too much current, or an arc-fault trip from an appliance arcing. Trip it with the TEST button (it will kill power, obviously) and the LEDs should display as they will for an arc-fault trip. Get a Kill-a-Watt and measure the current draw of each appliance on the circuit, and total up the Amps, and see if the total exceeds the breaker rating. That is how an overload trip will occur.

If it's not an overload trip, look at arc-fault tripping, try feeding appliances from an outlet in the other bedroom and see if the AFCI trips move to the other bedroom. If they do, it's an appliance that you moved. Keep in mind extension cords dull the sensitivity of ACFI detectors, so the problem might go away altogether. An arc fault in an appliance is a bad thing, and will start fires. An arc-fault inside the wall junction boxes will also have this effect, but they just changed your receptacles so that seems highly improbable.

As Sherlock Holmes says, when you eliminate the impossible, whatever remains, however improbable, must be the truth.

Normally, power is supposed to flow from one prong, through the device to do useful work, then to the other prong. If power leaks out of that loop, it can go a third way - including through you. That's called a ground fault and a GFCI has one job - detect that.

In your latest video, you showed where you plugged a device into a GFCI, and it tripped. Working as intended. When you plug in an appliance and it trips a GFCI, that's a problem that got caught before it killed someone.

Your apartment has at least 3 GFCIs - 2 for kitchen countertops, and 1 for bathrooms. When an appliance trips a GFCI, plug it into every other GFCI in the house. If it trips them all, then the appliance is bad. Into the trash it goes. Seriously. Lots of people get into total denial at this point, but don't bother.

Now, what if the GFCI trips with many devices but only in certain receptacles? That is a bad receptacle. It's likely the metal screws are hitting the side of the metal junction box or the ground wire. The electrician can fix that by wrapping it with electrical tape. Or it's broken.

What if plugging into a normal receptacle trips a GFCI? That is normal, 1 GFCI device can protect many receptacles.

What if GFCI trips are random and intermittent? Trip the GFCI. You know how to map which receptacles are on that GFCI. Unplug everything on those receptacles. One at a time, move them onto a different GFCI circuit and let them live there for a week or two. If the problem moves, it's the device. Remember your kitchen has two GFCIs.

The two bedroom breakers are a special type called a AFCI. Like a GFCI, it trips for certain faults. Unlike a GFCI, it's looking for a totally different fault: arc faults - or specifically, wires arcing either from a loose connection or a short. This starts house fires. It's in bedrooms because it happens a lot in electric blankets.

You identified some light switches that switch receptacles. That is a normal, modern construction technique, and it's done because it's cheaper than wiring ceiling lights. You are supposed to plug a desk or floor lamp into that receptacle.

In fact, the building code requires switches in the usual/expected locations.

Once you do that, those "useless switches" will make sense.

I know you don't need it, but it's not for you. It's for guests, meaning First Responders. So the fireman can "clear the room", the EMT can work, or the cop can see you're holding a computer mouse and not a gun.

wow What a PITA. It reminds me of the amateurs who a previous homeowner hired to install 100 ceiling pot lights in the attic, that caused similar problems for me and even mis#wired Neutral ,Hot and Earth Ground all swapped. Hot and neutral for stair lights and Neutral and box ground intended for earth ground.

There are flakey connections from cascaded wiring that can be caused by an increase in current to shut power off downstream to another room.

The most common is aluminum wiring and wire insertion crimp type connections commonly used in receptacles and switches. The other cause is oxidized connections that are not screwed tight enough to seal out the air gap that can create oxide (copper or aluminum rust) which is an insulator. These are notorious causes for bad connections that can be broken or connected by rapid surging.

The inverted toggle switch should paired with another switch to the same light. These are like two XOR gates in software ( which I think you will understand better.) Either SPDT switch can toggle the state of power to the lights between these switches for ease of access on either side of a room. On or OFF.

These “daisy-chained” connections which you call crosswired can cause down or upstream on poor connections at each outlet switch or ceiling light. (If oxidized or,poorly torqued Screw connections over a 1-turn loop clockwise under a screw-head. How it is wired depends on who installed it. Power enters the switch and goes to a lower of twin outlets for lamp,control or goes into ceiling fixture then sends out a pair to the wall switch to control. 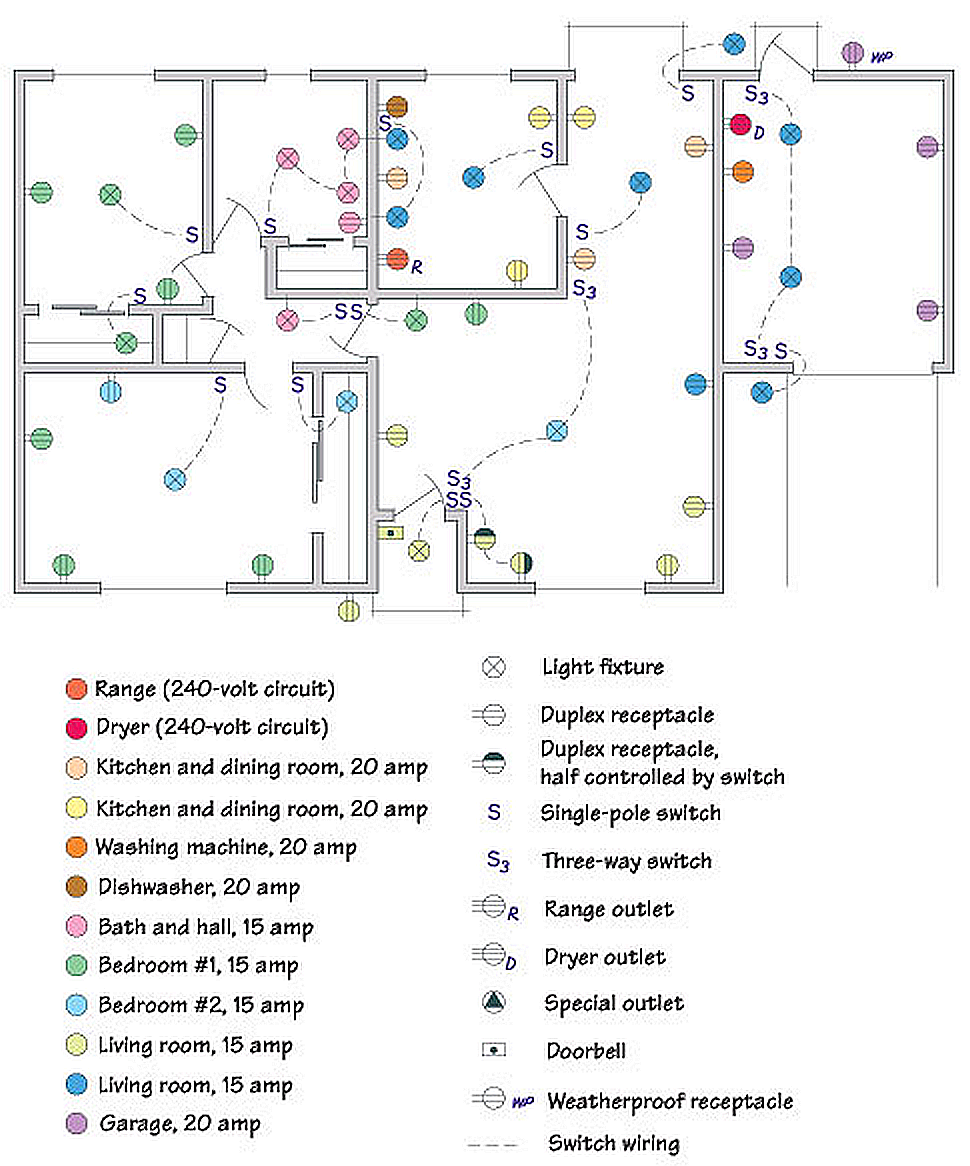 With this a good electrician can connect the dots and guess how it is wired in series.

Upload on wifi is likely coincidental but possible with standing waves and again oxidized contacts, so that they essentially become “very poor semiconductor like contacts” can arc close or oxidize open but ignore this one for now.