Just looking for some general framing advice and if my plans moving forward make sense.

I have cut an opening into an existing wall, non-load bearing. Originally there was a doorway, which I have opened up much further and left a knee-wall remaining. When I originally cut the opening, I did not realize that this through-wall continued past the door opening behind my pantry. This combined with the fact the top plate of that wall is not solid (see first photo), makes me think I need to do something to better solidify the remaining top plate.

My plan is to just run a 12' 2x6 across the very top, unifying the top plate on the left, the segmented top plates, the x2 vertical 2x4's I've added, and the 2 remaining original studs. On the bottom, I plan to trim the hanging studs down so I can get a 2x4 running horizontally across the opening. Finally, I was planning on running another 12' 2x4 across the bottom, similar to the 2x6, to unify the x2 2x4's that were running above the original doorway and the 2x4 I'm adding to the bottom. 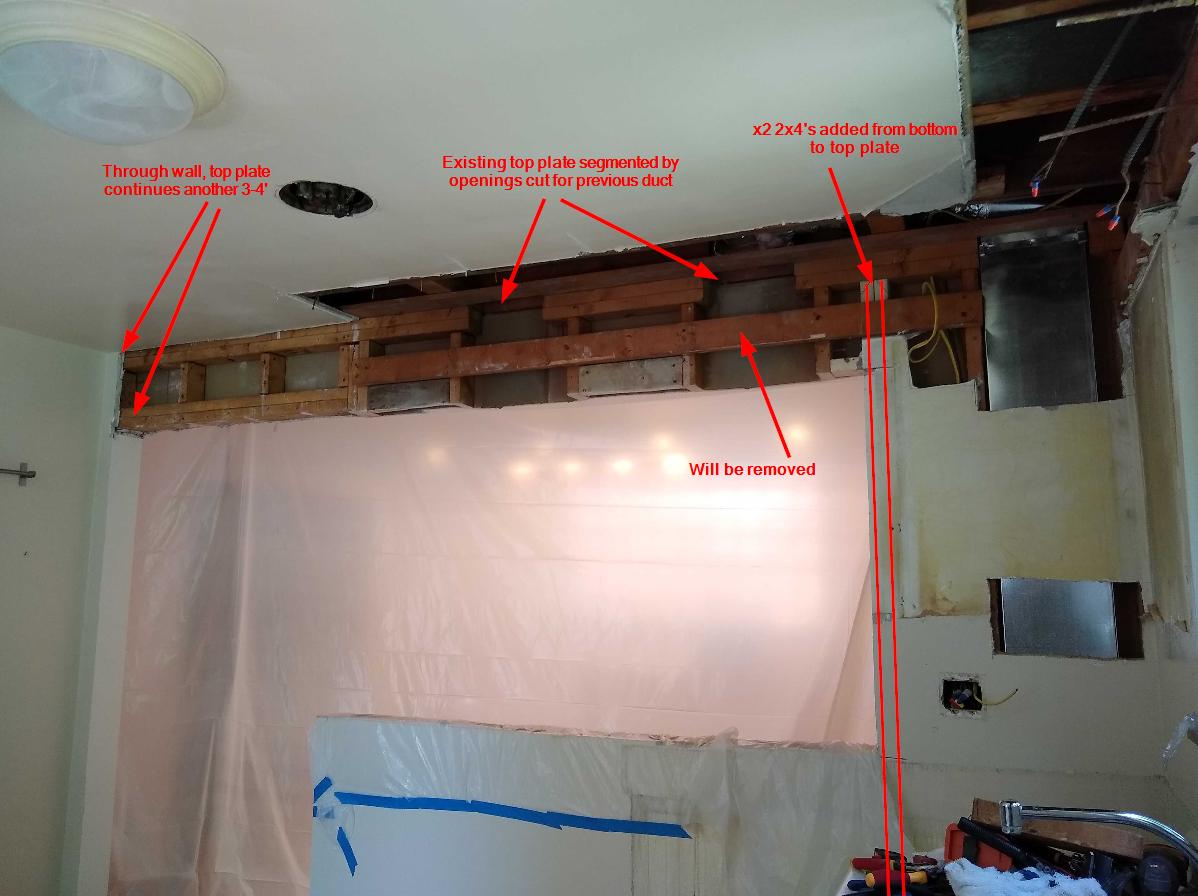 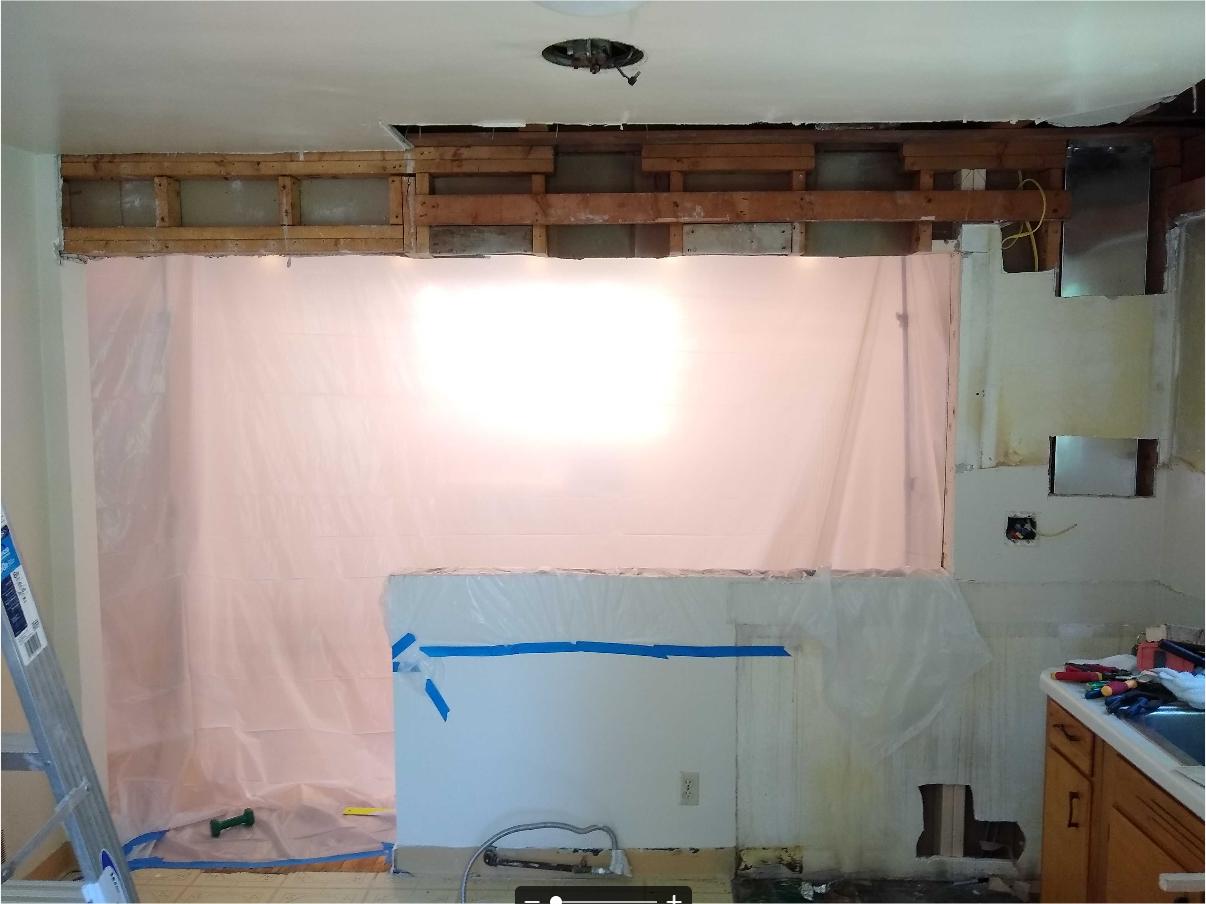 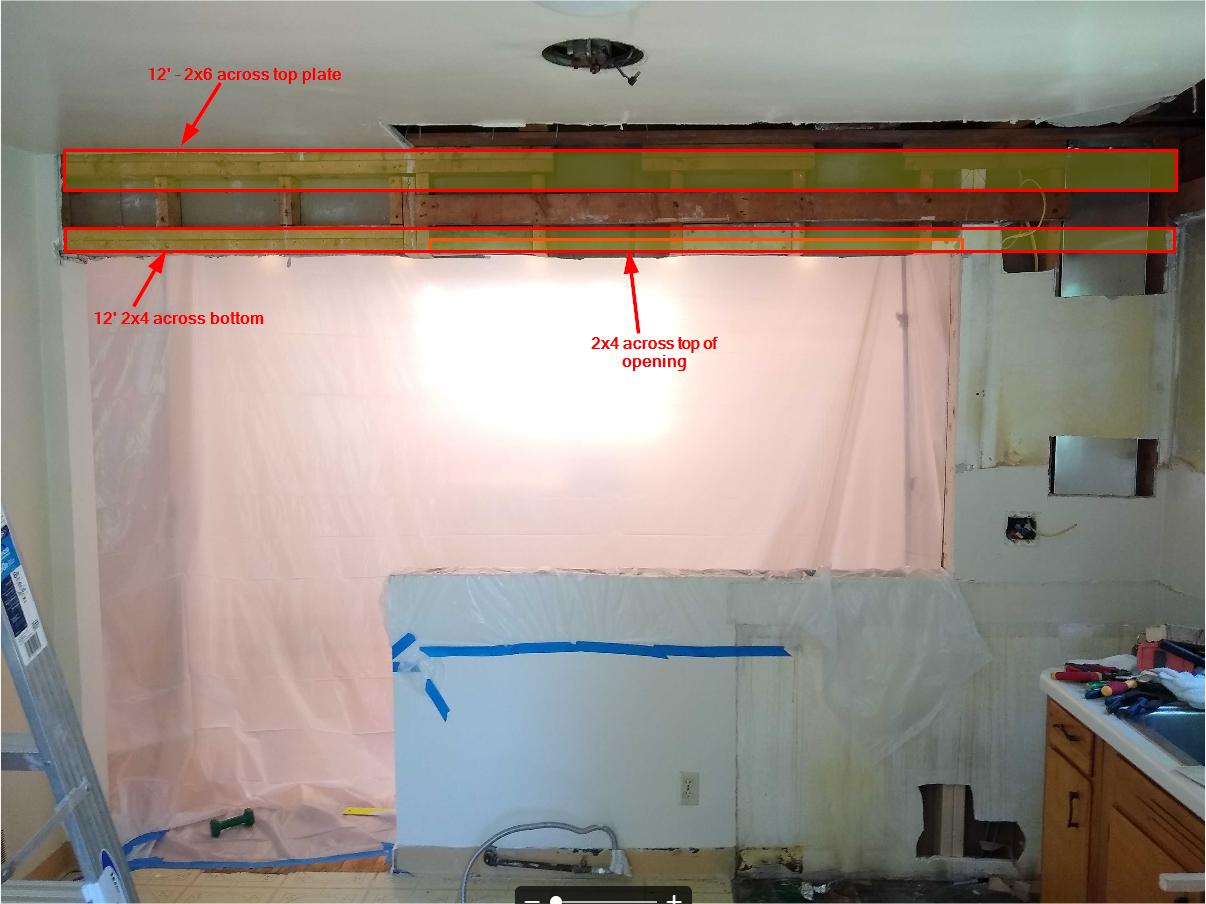 Enough people (online and people I know) have uttered the phrase "Get rid of it all" that I'm reconsidering leaving the hanging partition. It has aesthetic benefits as well as greatly simplifies the drywall finishing, so if it can be done correctly I will do that instead.

If I do that, I understand I need to finish the remaining wall with some vertical 2x4's. This a little tricky for a few different reasons: 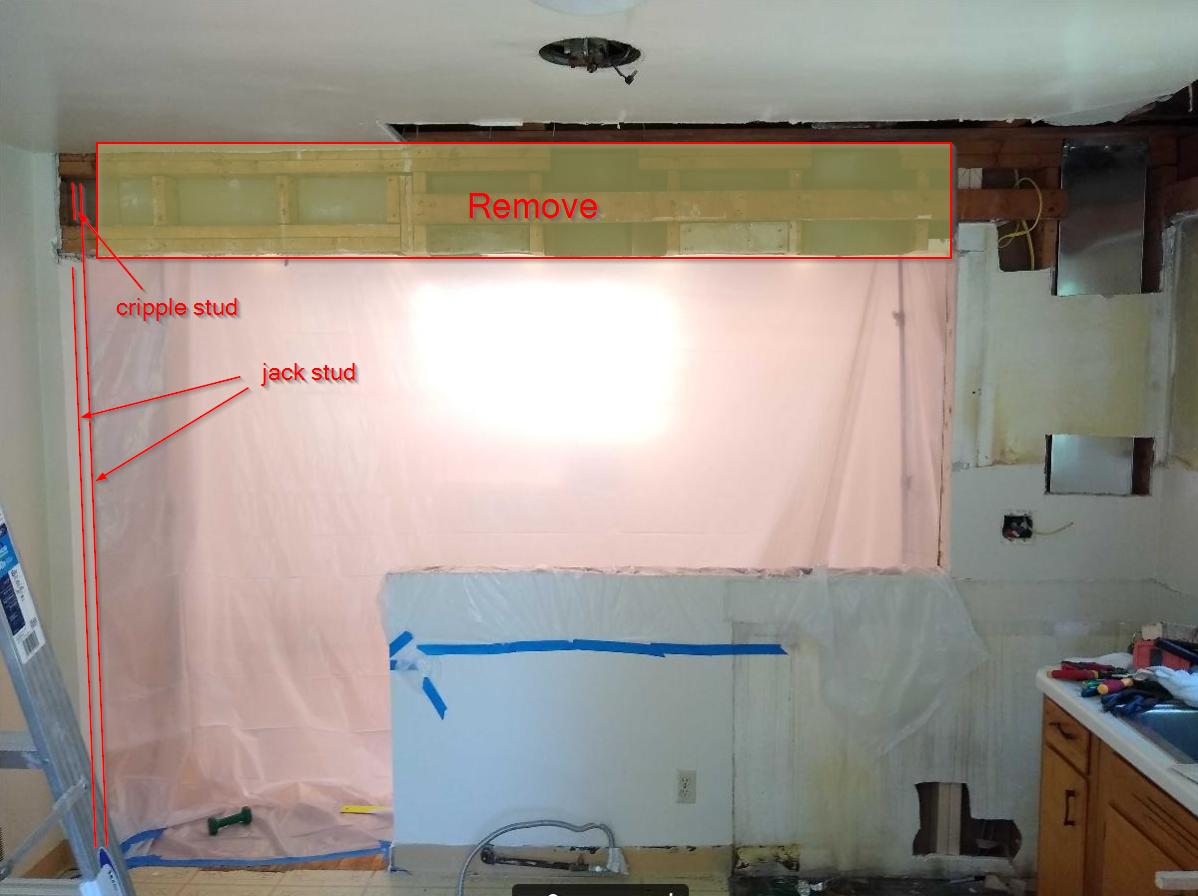 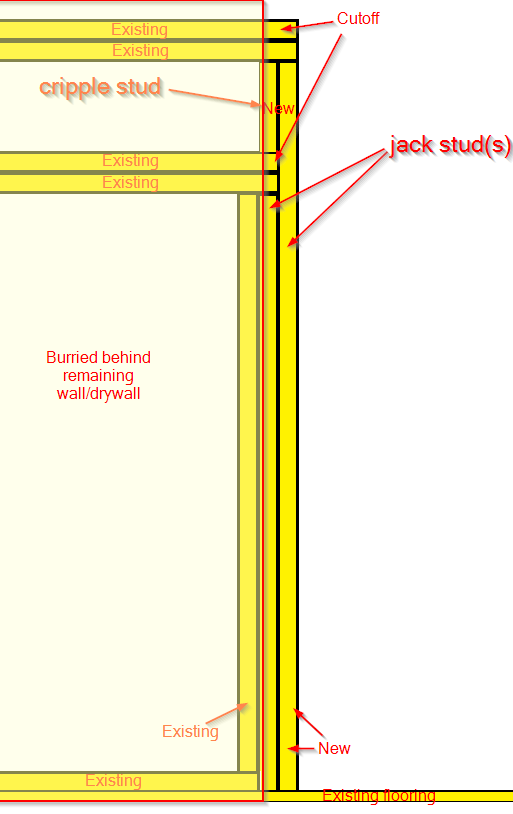 To take some mystery out of it I cut away some more drywall to reveal the header does stop right there. So I could either run a brand new header as suggested, or just cut everything out completely, right? I realize now if I run a new header I won't have a jack stud under it, unless I add 3rd 2x4 in there. Not the end of the world 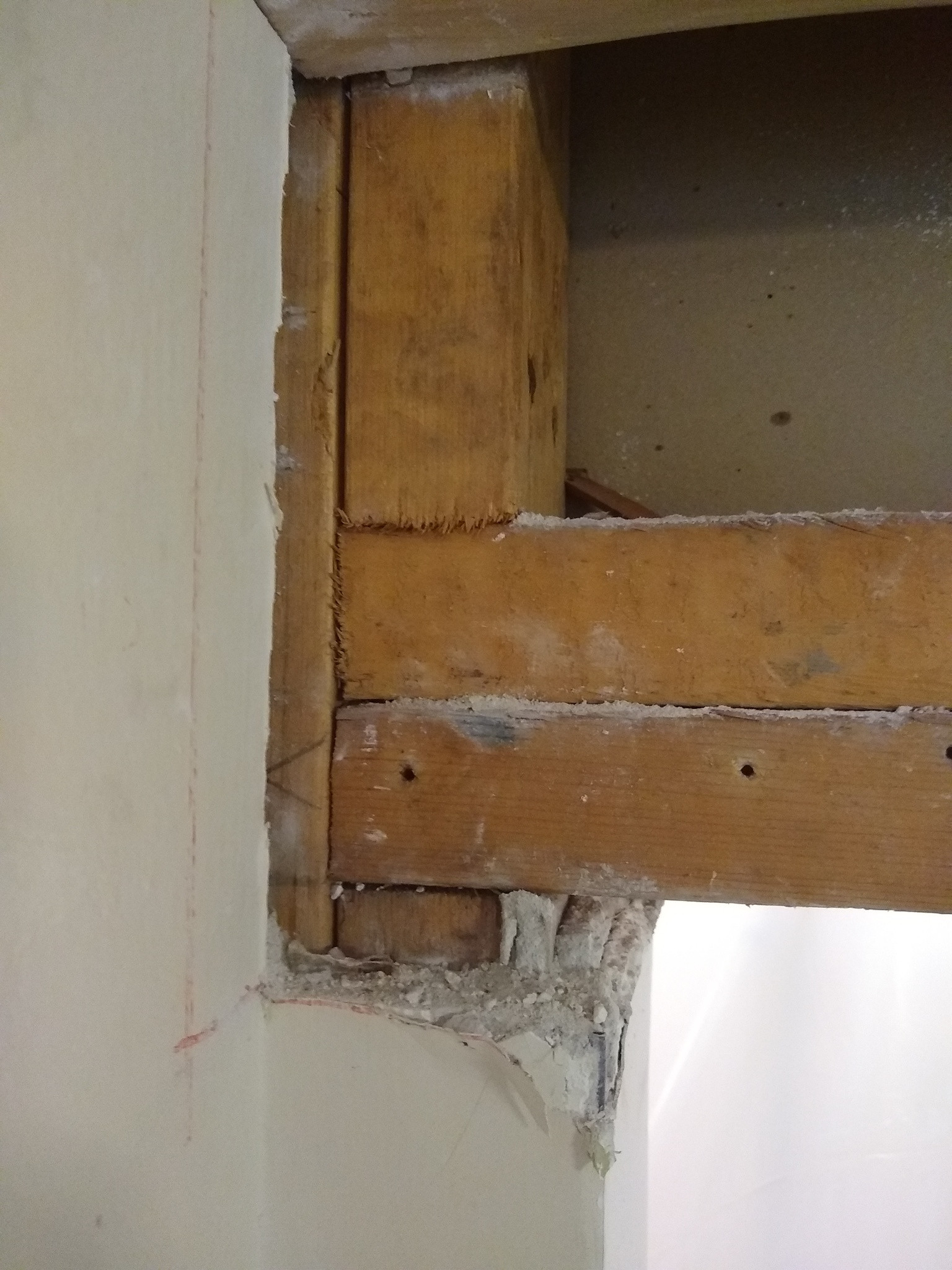 I think you need to trim the 2x4 studs in the opening and build a header over the whole new opening, like the header that was over the original doorway, which will extend across your new opening. 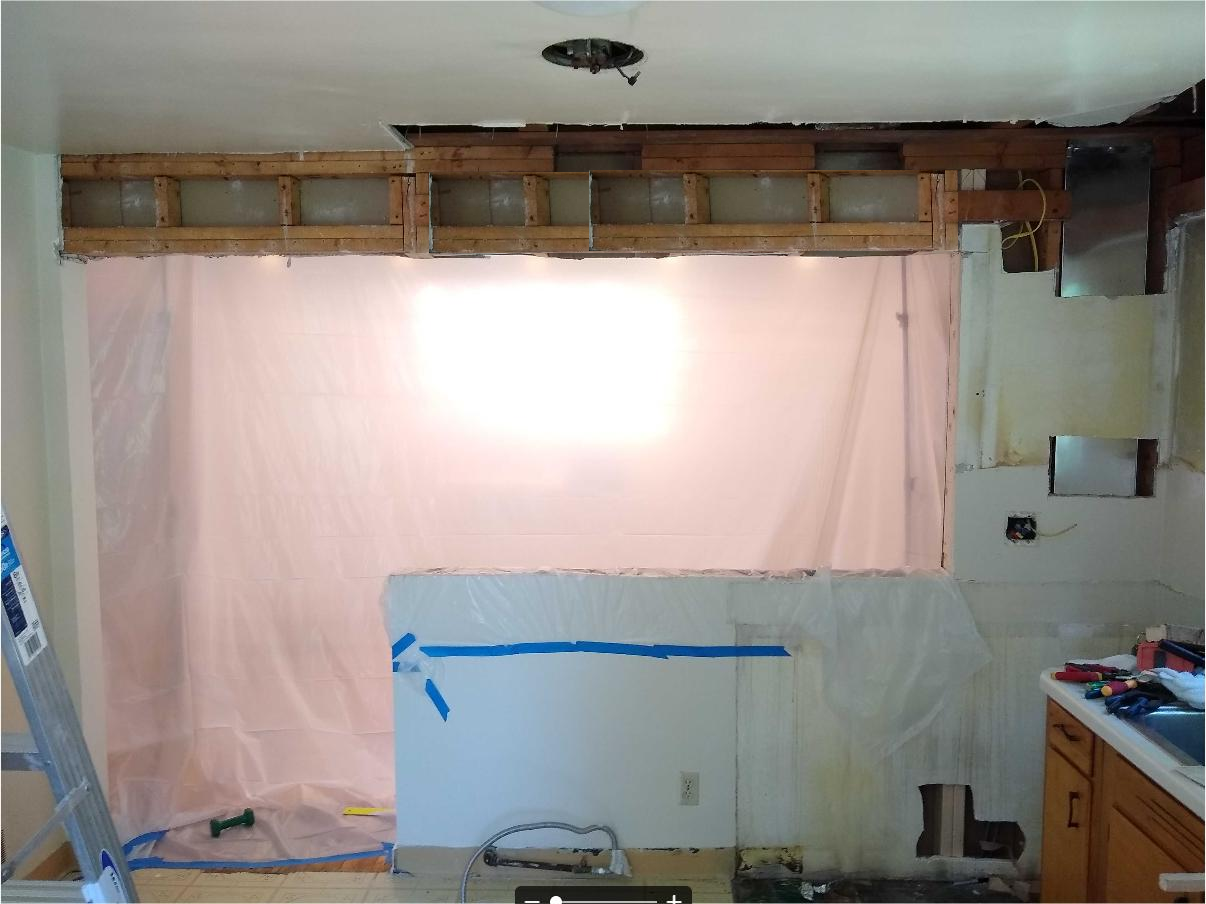 (hopefully you're better at it than I am with Photoshop...)

Taking care to attach to existing studs on the right side and adding a jack stud (doubling the stud) at the end. 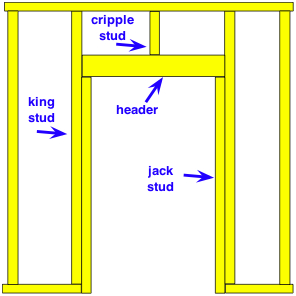 I also think that you'll have to do some work on the "knee wall" (half-wall) to make sure it's sturdy enough, too. I assume it's just 2x4s toenailed into the bottom plate and maybe a double stud on the end (left over from the door frame)? It's hard to know for sure since we can't see what's left.