I wanted to ask this question to the community.

Is there a legal way to install a mini split or heat pump without having an EPA license? I have seen similar questions asked several times or questions on how to charge systems with the common answer stating a license is needed.

I am not asking about brands or “work arounds” but a legal way for a home owner to install their own heat pump / mini split system in the U.S.

Edit added I figured I would leave this open until I can add a bounty (no correct answers yet) I am doing this for community knowledge as I just had a class on how to repair DIY installs (I do have universal 608 and 609 licenses) This is not a trick question , the EPA requires licenses to charge the line sets even on R410 but the no soldering is getting close , and I do mean NO EPA license required to set these split systems up that a home owner can do (ok electrical license may be required in some locations to connect the power) this may help others as I have said a license is required quite a few times

Yes, there is. The problem is that a mini-split is, after all, split. That means the pipes between compressor and evaporator are custom fit and routed through your house. Obviously, you can't fill the pipes until after they are fit. So if the fluid is freon, yeah, you're gonna need a license.

However that's not the only way to do it.

In this scenario, we have a complete unit that sits on a pad outside. It contains all the Freon machinery, pre-filled from the factory. It makes cold water, which is piped into your house and run through a radiator (one made to deal with condensate). Then the warm water goes back out to be chilled again. You can have as many registers as you want.

This is called an "air to water heat pump system".

Instead of water, you use antifreeze, not for in-use times, but for the winter so you don't have to drain it. 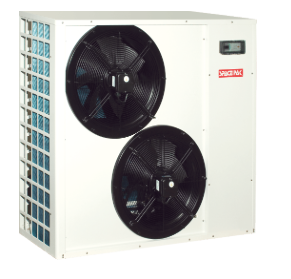 Outside unit, containing all the freon. The inside unit is simple.

This is the mini-split you are familiar with. Put the Freon condenser outside and the evaporator outside, with custom fit plumbing between carrying the freon. Freon must be added, so must be installed by pro's.

This is a factory-built box, with the Freon pre-charged, that sits inside the room being cooled. The box gives cold air and hot water. You plumb the hot water outside, let it cool through passive radiators, and return it to be heated again.

Science fiction? No, there's one of these 10 feet away from me right now.

These systems are called "water-sourced heat pumps". In a small residential system you would use antifreeze, so it doesn't break pipes in winter. 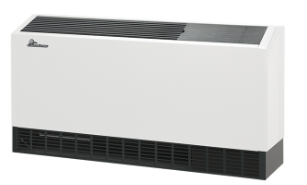 Inside unit, containing all the freon. The outside unit is simple. This thing is loud, by the way.

Most of these systems can actually reverse to be heat pumps. In that case, when it is too cold outside for the heat pump to work, one choice is to bypass the outside radiator and run it through a fuel-fired water heater instead. That's cheaper than resistive electric "emergency heat". Or you could interchange with groundwater, which is always at a moderate temperature.

Manufacturers are starting to tinker with "alternate" refrigerants, probably to get around the environmental hazard and licensure of CHC/FHC/CFC Freons. One promotes "environmentally friendly CO2"... amusing, but that actually is reasonable since it will be captured inside a coolant loop for the next 20 years, not emitted on a regular basis.

Amazingly, they're re-branding CO2 as R-744. Next thing you know, they'll patent it and we'll have to pay a license fee to exhale!

I thought DIY installation of a minisplit R-410A system was allowed. The condensing unit is precharged with refrigerant, and in at least some of these systems no soldering is required to connect the refrigerant lines. One might have to have a licensed technician do any adjustment of the charge, but the refrigerant charge on board as sold is correct for the lengths of refrigerant lines as sold.

There is a heat pump that requires no HVAC licensing to install and it has a factory warranty, I found out about this in a training class. Some of the answers here were close, there are 120v (smaller units) and some 240v units, they require a pad or house bracket like any other split system and a local disconnect for the power. Both the evaporator / line set and the compressor are each sealed units with self sealing valves that just require a wrench and proper torque to assemble, the name of the main unit was MR cool DIY.

There are some drawbacks of the system in that the line set is a fixed 25’ and only single inside units are supported at this time. With this said if a single “split” unit was wanted this could be installed DIY. With some mechanical and basic electrical knowledge.

I thought I would mention the main failure was a Freon leak and that may be due to the fact some are not properly connecting the inside unit / line set to the compressor. A bubble solution is suggested and this will identify Grose leaks so a premium thread sealant should also be used or was suggested in the training along with the use of a “pro Freon detectors”.

I have no connection with Mr Cool DIY and have said many times there is no such thing as a true DIY Asked most systems have to be pumped down after being connected not this one.

As I said I have no connection but looking on line at the system and feedback this looks like it may be a good solution for some. It costs a bit more up front than other systems with similar warranty’s but no tech or additional Freon is required so it may end up being less expensive. Other than an excess of line set for a single story home and the compressor drain being an issue on a slab it looked OK for a single head system. So there is a true DIY system out there the other 2 systems mentioned in the training do require the line sets being pumped down so I did not include those but they are shipped with a charge in the compressor as most are but can be purchased without a license I am not sure how the company’s are getting away with that.

I hope this helps someone, please do your own checking on DIY hvac, I found out about these because of failures but there was a lot of positive reviews.

Not the answer you're looking for? Browse other questions tagged hvac air-conditioning heat-pump or ask your own question.

1
Is a PTHP an HVAC option for a super or well insulated structure?
2
AC not cooling using heat pump
1
heat pump/air conditioning wiring to thermostat
8
Can a homeowner without a Section 608 EPA license legally connect his own gauges to his own air conditioner if the unit uses 410a refrigerant?
1
Mini Split condensate pump to condensate drain
0
Sanity check mini split layout for old brick house
2
Anyone installed a hot water coil in their HVAC ductwork to increase heat pump efficiency?
2
Dual zone vs single zone mini split Air/heat
0
Ductless Mini Split heat pump not cooling / heating outside of room
0
In a multi-zone mini-split setup, how do you heat heat rooms without an evaporator?