Is my plan for replacing 4x4 deck posts with 6x6s reasonable?

We're planning on resurfacing our deck this summer. As preparation I got an inspector to take a look at the substructure to make sure it is still in good shape. The good news is that for the most part it is. However, he recommended that 5 of the 4x4 vertical support posts be replaces with 6x6 posts instead. The 4x4s aren't failing but they are attached to the beam incorrectly (just with lag bolts, as in the "wrong" example here) and they are about 6 feet high. It's more about future-proofing than an imminent safety issue.

I called around for quotes and the first contractor I talked to basically said it can't be done and I need to tear down my deck and start over. This surprised me. There are videos all over youtube with people doing this. The process seems straightforward enough:

Am I missing something?

As an alternative, I've considered just adding 3 more 4x4 posts and attaching those to the beam (and retrofitting the old ones) with these

Screen grab of the relevant section of the inspection report:

I could ask you to sketch your deck out with dimensions to calc out the beam reaction on the posts, but just shooting from the hip here to save all of us time: there's probably nothing wrong with using 4x4s, especially if they're only 6' tall, spaced that closely, and not also supporting a roof.

If they're leaning or warping badly, then correct the lean or replace with another 4x4.

Nobody in my market is using carriage bolts on any new deck, I don't know why that YouTube guy was telling people to. If your beam was a 3 ply instead of a 2 ply, the 1" notch leftover on a 6x6 wouldn't really hold anything. Everybody uses metal post caps from Simpson or USP now.

This sounds like a lot of work to fix something that isn't broken, all based on a recommendation from a random home inspector. They're usually a jack of all trades, but master of none type of person. I've never had a positive experience with one, they mostly just repeat stuff they have heard and don't really understand.

Home inspectors have to find things to feel like they're doing their job, and if they don't overreact to minor things they might even be liable if something did fail.

Replace the beam/posts if you want, but if it was me I would add two treated 2x4s to each 4x4 and attached with galvanized 10d nails (8" on center, in 2 staggered rows 1.5" from the edge). One on each side, directly under each deck beam so you have a 2x4 supporting each deck beam and not just the carriage bolts. You'd end up with your 4x4 post looking like it's a 3.5"x6.5" post because of the two 2x4s you added to each one.

The 4x4’s would be adequate if they were attached ( and braced ) to the beam correctly, so no need to replace with 6 x 6.

Digging post holes is difficult enough but doing it under the deck will be a painful task.

Support the deck with a temporary beam that you can jack up just slightly once the posts and beams have been disconnected. I would then build supports for the old beam in a way that will allow it to be moved from side to side, kind of like tall sawhorses. Disconnect the old beam from the posts, jack your temp support beam ( and deck ) up 1/4 inch and slide the old beam over on there supports enough to allow you to work on the posts.

Now you are ready to add Simpson column caps. ( similar to these ) 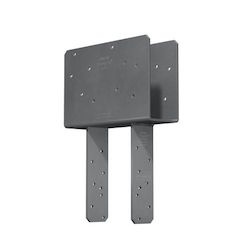 Move your old beam back over, just to, but not directly on top of the posts, slide the column caps up onto the beam, slide them into place so the lower tabs are in line with the posts and then slide the beam over the top of the posts. Now you can lower your temp beam so the old beam is sitting on the posts and the brackets can be fastened. ( Make sure you beam is plumb.) I would also add joist brackets to secure the joists to the beam.

Remove all temporary bracing and bobs your uncle.

I would also add cross bracing ( at an angle ) between the 4x4 posts for lateral support.

Not the answer you're looking for? Browse other questions tagged deck decking or ask your own question.

8
Can I use 4x4 posts as the primary support for a deck?
1
Understanding deck spans for beams.
3
How can I extend my deck posts to support a pergola?
1
Stacking two 6x6 posts for two story deck
2
Adding a pergola to my deck; ok to replace corner railings posts with pergola posts?
1
What type of supports do I need for a 12'x20' deck?
2
framing feedback for ground level deck 10'x22'
1
Can I stack two 6x6 timbers for a deck beam?
2
How much life left on 4x4 posts on my deck (in particular one that butts against the foundation)?
1
Post protector (or something else) to extend life of existing deck 4x4 posts?