This will likely be an easy question for an electrician if one is reading because I cannot believe that I invented this issue but it requires a bit of set-up.

I want to attach an exterior light to the gable of my detached, one-car garage. Here is the outside view of the gable where the light would go. 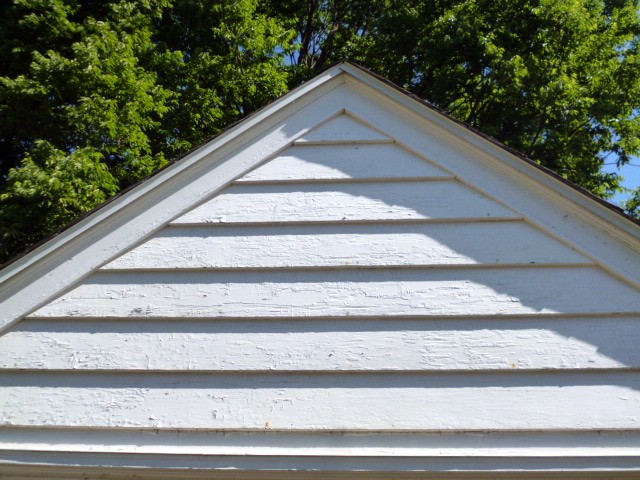 The kind of light probably does not matter but, for the record, it is a gooseneck style “barn light.” As a matter of fact, it is this one:

I bought the light based on style, appearance and good user ratings without too much thought about installation. I like it. It is clearly not cheaply made as so many light fixtures seem to be.

The mounting plate (I think the correct term might be “canopy”) of this light is not the dome shape you so often see in light fixtures. Instead, it is relatively flat. Not completely flat. It has a recess on the back (the gable side) of about 3/16” as you can see in this picture. 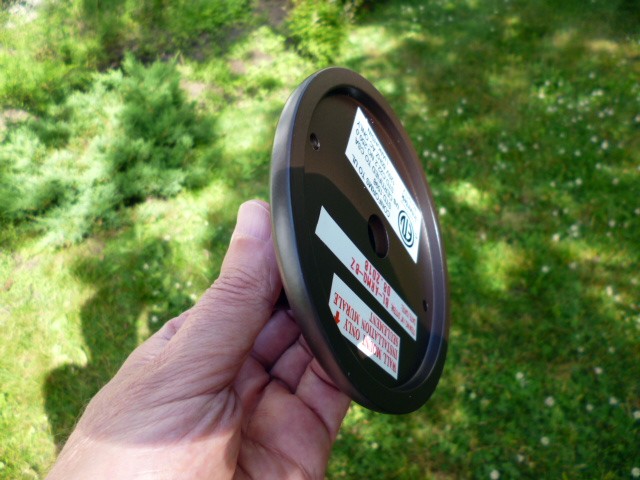 Now, you might think this would be simple. Just cut a hole in the gable siding where I want the fixture to go and mount an electrical box directly opposite inside the garage.

But, it turns out that inside the garage there is a 2x4 support installed at the exact midpoint of the gable, as you can see in this picture. 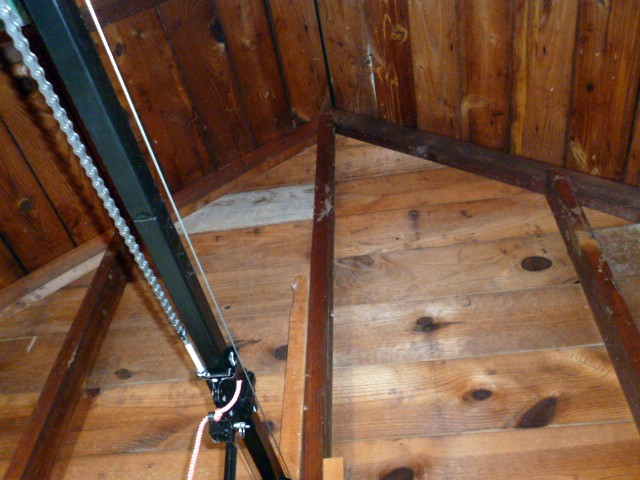 Naturally, I want to install the light at the exact midpoint of the gable, so I have a problem. Because, as I understand it, the NEC requires the wiring to terminate inside a box, which I cannot install directly behind the light mounting plate (canopy) because the 2x4 will be in the way.

As I see it, there are two possible solutions:

One is to use a hole saw to cut the appropriate size of hole in the siding ONLY (not cutting into the 2x4 support behind), then mount a half-inch pan (or is it pancake?) box to the 2x4 on the outside (gable side), then run the cable through a knock-out that’s off-centered to avoid the 2x4. The hope here is that the half-inch pan box plus the 3/16” recess on the mounting plate (canopy) will be enough to allow the mounting plate (canopy) to sit flush against the siding. Remains to be seen.

A second option would be to drill a hole in the siding on the outside (gable side) directly to the left (as seen from inside the garage) of where the 2x4 lies sufficient to run the light fixture wiring through (not the NM-B cable) and then mount an electrical box inside the garage along the left side of the 2x4 at that same point to join up the light wiring and NM-B. This seems to me to be the preferable option.

A possible issue with both solutions is that I might have a problem snaking the light fixture wiring (not the 12-2 or 14-2 NM-B electrical cable -- I mean the wires included with the light) around the 2x4 (at almost a 90-degree angle) to get them to the electrical box. Because, remember, the mounting plate (canopy) will be directly centered over that 2x4, which actually is 2x4 (1942 construction). But those wires are a lot skinnier and more flexible than the NM-B so I think I can do it.

My questions: How would you do it? Do you see any problems or code violations here? Is there a reason to prefer one solution over another? And if I do have difficulty getting the light fixture wires past that 2x4 to get them to the electrical box would it be OK to notch a little bit of wood out of the 2x4 to scoot past it to reach the electrical box?

Sorry to be so long winded but wanted to touch all relevant bases. Of course, I could just hire an electrician but I feel like I ought to be able to do this. If you have read to this point, you have my thanks, and if you have any thoughts to share I would be grateful.

I would double-up (or even quadruple-up) with additional timber each side of that vertical support, bolted through top and bottom, then you can recess a mounting box into the stud and drill through to the inside for the cable, without affecting structural strength. You'll need a competent builder to confirm the timber strength and loading required.

I know this is rather old, but I would use a surface mount box, a couple of short bits of conduit and an elbow to get the cable inside the building.

You would need to run UF-B cable, as this would be a wet location and that's rated for wet use. It's a bit of a pain to run UF through conduit, though for this very short run, you should be fine. For simplicity, you could run the conduit into the building directly into a junction box, then pull individual THHN/THHN-2 wires from the junction box, through the conduit and out to the surface mount box. That's much easier to pull, and, frankly a couple of little spools of black, white & green are pretty cheap. At the inside box, you make your transition to NM-B for the rest of the run.

3
Can I put the junction box for an exterior wall fixture inside my garage?
2
Installing a exterior light in existing vinyl siding
0
Replace outdoor fixture where existing fixture larger than new one
0
Exterior lights on new siding, no electrical box to screw into, what to do?
4
Mounting light to vinyl siding block?
1
How to install a flush ceiling light with a poorly placed hole
2
Which electrical box to use for old-work outdoor light fixture and vinyl siding mounting block?
2
How to meet code when the outdoor light is separated from the electrical box by a wooden spacer
2
Can you extend electrical wires from a junction box as long as the splices are contained?